That’s a pinch’d off little thing. Attending too closely to the counting and the vowels’ll de-stomach a man. I like rearing up like a horse (or like Orlando Cepeda) and whinnying a mite. I’d title everything “Against Constraint.” And, buttery-chance by the billions come down the “pike”—I pick up (again) Clark Coolidge’s book about Kerouac and jazz, Now It’s Jazz: Writings on Kerouac & The Sounds (Living Batch, 1999), and see Coolidge quoting Kerouac to Ginsberg (1952) gussying up the note about “sketching” in “Essentials of Spontaneous Prose” (“Time being of the essence in the purity of speech, sketching language is undisturbed flow from the mind of personal secret idea-words”):

Sketching (Ed White casually mentioned it in 124th Chinese restaurant near Columbia, ‘Why don’t you just sketch in the streets like a painter but with words’) which I did . . . everything activates in front of you in myriad profusion, you just have to purify your mind and let it pour the words (which effortless angels of the vision fly when you stand in front of reality) and write with 100% personal honesty both psychic & so on etc. And slap it all down shameless, willynilly, rapidly until sometimes I got so inspired I lost consciousness I was writing. Traditional source: Yeats’ trance writing, of course. It’s the only way to write. I haven’t sketched in a long time now & have to start again because you get better with practice. Sometimes it is embarrassing to write in the street or anywhere outside but it’s absolute . . . it never fails, it’s the thing itself natch.

Coolidge puts it right: “Kerouac is a go-for-it writer, not a puzzle-paster.” Putting all the odd constructivists out to pasture. Wholly Orphic, banging it out, possess’d, sounding and “timing.” Providing a way into Coolidge’s own work. (Coolidge quotes a line of Kerouac out of Old Angel Midnight: “He thinks I’m competitive in a long pleasant souse of Wishing all of ye bleed stay meditation every martini destroy my black.” Sprung-syntax. The sentence proceeding on its own.) Too, for readers of The Cave, Coolidge quotes Bernadette Mayer (out of a letter):

What I seem to have to do is to have someone to address in order to begin, then lose that, mix it up, get mixed up myself, let the language take over, work out some structures within that, see an ending, bypass it and then see how much longer I can last, having more or less abandoned the addressee, then collapse at some false ending, casting the work aside with the unspoken hope that I may have made some discovery.

Completely sexual writing. Or jazz’d (that “see an ending, bypass it” recalling the Elvin Jones line about—soloing—“looking for a way to get out” or “let the language take over” Thelonious Monk’s “I laid it down, you got to pick it up.” Writing that engages the body. (Opposed to constructivist pleasures of collecting, arranging, patterning: slip-cover’d parlour work.) One way to peel Coolidge off the going-nowhere Language track (rails laid down behind him, he’d cover’d the territory some years “before”). I did, too, stumble into funny remarks pertinent to that in Lee Bartlett’s Talking Poetry. Coolidge (talking about Watten’s Total Syntax) says: “There is one sentence that stands out to me that really describes the difference between our approaches. He is talking about a poem of Kit Robinson’s: ‘The transformation in Robinson’s poem is not the coming into being of the image but of something even deeper—the perception of mind in control of its language.” . . . I don’t have much faith in the possibility that one’s mind could be in control of one’s language.” (Kerouac to Watten: “slap it all down shameless, willynilly . . .”) And Coolidge on the political efficacy of Silliman’s public “rush-hour” reading of Ketjak:

I know that John Cage has said that the syntax is the army—if we destroy the syntax we’ll destroy the control of language over us. I just don’t see it as that simple. I remember when Ron Silliman read one of his long works on Market Street in San Francisco at rush hour as, I believe, some kind of political act. I never understood how it could work in that sense; people passing by would take it as some sort of goof or irritation, passing by after work, rather than having their syntax freed.

Odd how little I’ve read of Kerouac. (Think how On the Road’s become, among other things, an adventure book for teen-aged boys. Not unlike Mark Twain’s The Adventures of Huckleberry Finn. So that two of the essential works of literature norteamericano rustle up into the academy under cover of “dismissible” genre. One’d put Catcher in the Rye there, too. Might go a way towards explaining Pynchon’s goofing with the “Chums of Chance” and the airship Inconvenience in Against the Day—dime novel for boys material.) Return’d (to Kerouac) and read Vanity of Duluoz a couple years back at Dale Smith’s prodding, loved it. Coolidge makes argument for the work’s seamlessness, “all of a piece.” “The feeling is that he knows the changes to All the Things of One Life in This World, and is wailing it out of all control.” 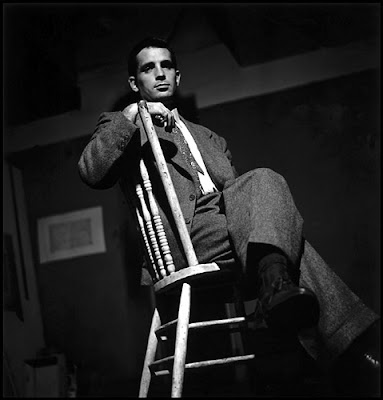