LXXI
Succinct tints of self-
rack’d sorrow balling down
the périphérique. Light mots.
Chop grunts under sack.
Unconditional as a peach
forcibly in fourteen carat
night’s cold harp aside.
Slit jism highway motorcade,
the Coppertone girl, Terry
and the Pirates innuendo
hotspot, deerskin fetter’d log
for appurtenance in holy
miles unreeling. And the
discus hurler crouches into
a gravitational center that’ll
move up out of
buttocks into solar plexus
to shoulder its way
out the length of
the arm in centrifugal
release, Christendom’s fling at
a joy convenience slant.
Speech for emphasis only.
Scout stipend for any
hibiscus, long-nurturing, ghostly.
That’s the nice thing
about that. Brain-beaches.
Angel, the medieval trivium
crowd isn’t doing dial-
up. Veil knot’d homicide
fix and the rhetorical
plunge. I didn’t write
that code. Eschew, fly.

I come unprepared to the hanging, the vernissage, sheriff. With some high delving honey-beak poking in the crevasses, looking for wit and its offal. (I think “honey-beak” must slough up out of the chaff-light’d backwash of Weetabix—who said Weetabix of late?—something I “associate” with Marmite and Viandox and Ovaltine, funny jarred morning things, morning ought to come out of a box.)

Kerouac talked about something he called “alluvials,” and if you look that up in the dictionary it says “alluvium, solid material deposited by running water,” which you get in a delta at the front of a river. He said, “Add alluvials to the end of your line when all is exhausted but something has to be said for some specified irrational reason.” Here’s a great example, in fact he used it himself in a letter to illustrate just that. Talking about Lester Young, the great tenor player.

“Lester is like the river, the river starts in near Butte Montana in frozen snow caps (Three Forks) and meanders on down across states and entire territorial areas of dun bleak land with hawthorn crackling in the sleet, picks up rivers at Bismarck, Omaha and St. Louis just north, another at Kay-ro, another in Arkansas, Tennessee, comes deluging on New Orleans with muddy news from the land and a roar of subterranean excitement that is like the vibration of the entire land sucked of its gut in mad midnight, fevered, hot, (and here's the alluvium) the big mudhole rank clawpole old frogular pawed-soul titanic Mississippi from the North, full of wires, cold wood, and horn.”

Investigatory push for a writer’s (sadly) always somehow a crank call back to oneself, what such terrific unwieldy mots pull’d down out of the heavenly detritus mean (oh, la—) for one’s own (ha!) practicum (oh, oh, la—“Kerouac’s is not a style. It is a practice,” says Coolidge). Particularly wow’d to see Coolidge talking about how “Kerouac used the word ‘goof’ a lot in a very positive way . . . saying how the free imagination he felt in himself was justified in the world outside and he had nothing therefore to reproach himself for.” “Crazy Seriousness.” “Goofing” (or “jamming”) being the preferred term of my scuffling days, rakish ungracious lip and sass approach to the “world of letters,” running things up to obscene implausible vamp heights (and dives) for the sheer thrill of it (like trying on hats) and (here’s the “goof” part) just letting it go, resisting the urge (there weren’t no urge, that would of made it all seriousness, rambunct tie-down) to make a fuckin’ program out of any of it.

I keep thinking about the unflappable innocent grace of the focus’d, think of a kid intent on something, that beatific idiocy of surroundings plummet’d, one sees it in the physiogs of music-makers constantly, mouth doing an obscure little tempo-inflect’d series of grimaces in the lost muscle tonus way of mouths. I say all that thinking of Kerouac’s poolshark vision of The Shadow—“the name I gave to a tall, thin, hawknosed fellow called St. Louis who came into the Pawtucketville Social Club and shot pool sometimes with the proprietor my father”—coming up toward the end of the series of scenes of Book Two (what Kerouac calls “A Gloomy Bookmovie”) of Doctor Sax:

. . . the greatest poolshark you ever saw, huge, enormous hands with fingers seemingly ten inches long laid out spread-claw on the green to make his cue-rest, his little finger alone sprouted and shot from his handmountain to a distance of six inches you’d say, clean, neat, he slipped the cue right through a tiny orifice between his thumb and forefinger, and slid on all woodsy shiny to connect with that cue-ball at cue-kiss—he’d smack shots in with no two cents about it, fwap, the ball would cluck in the leather hole basket like a dead thing— So tall, shroudy, he bent long and distant and lean for his shots, momentarily rewarding his audience with a view of his enormous gravity head and great noble and mysterious hawk nose and inscrutable never-saying eyes—

Typing that I am thinking how the other day, too, I quoted “sport”—other point of lean gracile focus? or is it how Kerouac jams at highest level in action, the unstill’d (unstillable) “nature” of the world pull’d up short by a mind in constant mimicking motion, and captured so. So that the beginning of Book Three (“More Ghosts”)’s got to pawn off the “unphotographable” Sunday afternoon sit-around (and, soon’s it does, the writing gets going into crescendo, look):

. . . it is Sunday afternoon in Lowell, absolutely unphotographable it is that I am sitting in my room in good Sunday clothes just home from a drive to Nashua, not doing anything, semi beginning to preside dully and absently over perhaps my slamdash hockeybang game which is a whole lot of marbles fighting over a little puck marble to kick it in the goal thereby killing two birds w.o.s. by making it also the official betweenseason Ceremony of racehorse-chipping, racehorsedestinying, things have to change in an organic picture of the world, my Turf was just like that, horses had to go through processes of prime and decay like real horses . . .

“Turf”—he’s talking about a horse-racing game play’d with marbles and how one marble’d shine “like Whirlaway or Man O War or Citation—other marbles couldn’t compete with this massive power”—so the (realist) necessity of making that marble “age,” with chips, &c. to slow it down. “Prime and decay”—hence the larger (and smaller) rhythms of Kerouac’s writing, the speedings-up and ralentissements, processual glub song. And I keep looking (fitfully) into various Coolidge books, looking for Kerouack’d rhythms and spurts, canny or not. And, here, marvelously, out of the eighth part of Mine: The One That Enters the Stories (The Figures, 2004), look. (I quote the whole paragraph out of some sense it’s a single “lick”—though I get itchiest with the “composer of bare intervals,” there proceeding. Isn’t there a similar difference being posit’d (investigated) here, between the “objects” “placed under glass in the collection hut” versus successions (“prime and decay”) of event?—even at rate of “planed the slow glacier.” (Tipped off by “At the precise rate of thought these are the ordinary events.”) Here:

I come not to bad but to sorry. Nevertheless this all has a kind of linchpin severity. Swedenborg spoke of “correspondences,” but perhaps this could be taken further and in another direction than that of the stratum of mystical glues. You write to friends and receive certain objects in return. These are then placed under glass in the collection hut or cabin high on the Schneealp. Returning to view and handle them again each summer the composer of bare intervals unburdened himself of the central coiled whisps of provocativity and at last arrived on the shoulder of lyric heat land. Here one summer I myself notice a small ice cube that seemed to have fallen a long distance through a darkening shaft into the light of benchmark buds and drift wheat. Below planed the slow glacier, the one that had inspired Baudelaire to a coronal of IOUs. At the precise rate of thought these are the ordinary events. I picked up a pin in the sun, it couldn’t wait.

One measure of excellence: the complete (unshowy) assurance with which that proceeds. Look’d hard at “whisps of provocativity” with it’s whips and wisps, and concluded it a fine word. (As Freud says in a letter somewhere: “We shall have a lot to discuss about that.”)

On the road tomorrow. Alors, Monday. 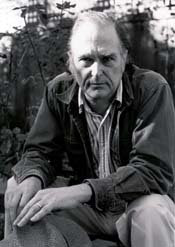