LXII
Come the blood-
offal days of
the eschaton, cut-
throat Helens buzzing
the estuarial swamps,
creasing the man-
grove islets, piloting
speedboats in bouffant
dos like bobby-
soxers, voyants buoyant
with sidekick kick-
boxing men in
crewcuts green, yeah—
the music’ll pizzle
out into shoe-
gaze vamp, dry
canyon desperado moiré,
math-punk with
its machine-loop’d
angularity, and noise.
“Absolutely programmed against
any sign of
the personal per
se” is how
one apocalyptic huckster’ll
put it, upright
and still stuck
in the saddle
of the horse
he’s slowly feeding—
withers by fetlock,
croup by pastern,
oh my caballero—
into the flames.

Oh, I don’t know. I keep dabbling (like a puddle duck, tipped up, ass in the air) in Elizabeth Sewell’s The Orphic Voice: Poetry and Natural History (1960), largely because somewhere I read of Ronald Johnson’s high admiration for it (“When I read . . . The Orphic Voice,—it’s in “Hurrah for Euphony”—“I knew I wanted to be of that order of writer she talked about.”) He continues: “I’d met my myth: Orpheus and Eurydice, and that proved honeyed terrain.” Honeyed terrain, how lovely! (Too, Johnson talks of Henry James—a huge bête noire in my book, still partial to the Nabokovian assessment—“elephant trying to pick up a dime”: in a letter to Peter O’Leary, Johnson recommends The Ambassadors—after Duncan—calls it “the best possible portal to The Master. Although it approaches the late style in every way it is not as lapidary as The Golden Bowl, and James called it ‘the best rounded of all my productions.’ James put the reader’s attention on the language itself, long before Joyce.” Though elsewhere (1995 Chicago Review interview with O’Leary) Johnson quotes James’s line: “To be present in every line in a text from which you had so elaborately tried to hide yourself.” To hide oneself in language, is that possible? Usually, the worthies claim it’s limpidity itself (“clear” language) that camouflages “self” most ably, that no-shenanigan plain speech . . .)

Back to Orpheus. I think: it’s not the loss of Eurydice part of the story, that headstrong turning around to look (though thinking of it in terms of Orpheus’s being unable to resist, the looking itself an obsessive-compulsive act—not unlike writing—boosts its interest-quotient up a little)—and I do like the notion of sweet-talking one’s way into the underworld. It’s how the rocks up and approach at the big O’s shuck and jive, and the root’d trees, too, and how Orpheus’s callow song seamlessly machine-tools the beasts and all the surrounds. That is, everything beyond the “voice-activated” environs (the page) no longer exists—a parable of one’s writing. (Johnson himself tells O’Leary: “What I got from The Orphic Voice by Elizabeth Sewell was the idea that Orpheus was a poet of nature who strummed his lyre. He caused the animals and plants, the atoms, to move in rhythm. She said that this is the poet. The poet is somebody who strums that lyre and he’s connected to the natural world and makes things happen.” And adds: “of course, the second thing about him is Eurydice, which took me a long time to figure out, was the anima within, the muse, and Orpheus achieved his ability to make music from that.”) Orpheus’s spell (the writing, the Martian invasion voices) is so complete the decapitating onslaught of the Maenads only loudens up the score. A detail I never noted before: even after the rafting down the river, head doing its O sole mio’s, limbs strewn about, it lodges in a backwash cave, and persists in its announcements, naming each day and each night to the point that Apollo’s got to tell him to “stow it, pal; just shut the hell up.”

What Sewell posits is poetry as a complete instrument of inquiry, one that includes the body in its ruckus. Johnson says to O’Leary rather off-handedly: “I think there is no mind / body split, but that is deeply engrained as an idea in the Western mind since Plato, etc.” A perfectly Sewellian remark. Sewell:

Prose has as its aim to establish a form of words which shall be equivalent to experience, the self participating in the construction being disregarded. To examine an inclusive mythology we must turn to language’s other mode, poetry. Here the inclusion of the participating self (poet or reader, it is all one) is open, deliberate, an active ingredient in what goes on. Poetry is the most inclusive form of thought we have yet devised, a conscious call upon those resources of myth which underlie all language and all thinking. If the self is involved in any working system of thought, whether it is recognized or not, poetry with its recognition of the self’s cooperation, is in fact nearest to reality. Exclusive mythology, in its preoccupation with abstract form, embarks on a wholesale game of make believe by the exclusion of the self. Poetry, metaphor, mythology are highly realistic and down to earth. It is logic and mathematics where are the imaginative and fantastical exercises.

Which amounts to nothing less than a call for an overturning of the dominant “objective” “scientific” sensibility. And a defense of the lyric. I love that aside “(poet or reader, it is all one)”—putting the boot avant la lettre to all the ink spill’d in argument for the “writerly” text’s liberatory ethos for the hapless reader. Of course, swell’d with Johnsonian fervors last night, I turn’d back to the Bettridge and Selinger-edited Ronald Johnson: Life and Works (National Poetry Foundation, 2008), rather than pursuing the Sewell. Pored over O’Leary’s absolutely moving account of “apprenticing” himself at the age of twenty-four to Johnson, “Gilding the Buddha: My Apprenticeship with Ronald Johnson.” Ah, reading, its sidelong pickerel feints and dashes, skirting the obvious, nosing deep—it’s like Johnson’s Kansan sinkhole call’d St. Jacob’s Well, legendarily “bottomless.” One saunters (like Thoreau) a circumspect outline all about that bottomlessness, reconfiguring one’s guardians, one’s angels:

no one can see the end of at the Well of The Bottomless,
I have placed parallels of bright guardians
“along with the trill
of the Nightingale,
and the call of the European quail” 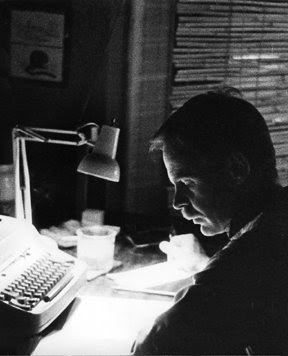