LXXXVII
Down I go blackly into my cringe-minimal assayings of the world
Verbal.


LXXXVIII
Is we to fall to puling and disarray in form of status reports, as if
We is something of stationary noticeable bulk made to be wheel’d
Hither and thither like an oxygen tank, and not a man capable of
All manner of rut and strafe, an autonomous prototype vehicle
bestrewing great Magellanic fields with cubic kiloparsecs of cloudy
Sperm?


LXXXIX
That the brother of Theodore Dreiser, a man who made art of a kind
Out of sheer clumsy doggedness, and is likely one of the reasons one
Avoids the word “yet,” a man named Paul Dresser wrote “My Gal
Sal” in 1905—that’s the sort of thing one learns listening to the radio
Sunday morning, peeling an orange. One’s fires smolder, ash’d up
With little coats of ash, each containing a single hard pellet diminish’d
To burn a hotter fury, banal upshot of matter’s essential gaseousness.
Simplicity’s toll exact’d like a lurch into a ditch. All the years of fielding
The hot grounders, making the underhand’d flip to second for the out,
Moves reeking with the irrevocability of limit, the impassive sustenance
Of the binomial, toggle and switch. Drear absorption in mechanicals
That refuse to account for that dime-sized splash of sweat that plummets
Off the pinch hitter’s arm, the way the wind-rill’d jersey throws down
A momentary shape of long-fang’d wolfishness along the searing white
Line. “They called her frivolous Sal, / A peculiar sort of a gal.”
Oh the unsong’d billions of events swallow’d whole by the hog-
Querulous grandiosities of events evident and distinct made by just such
Subsuming (without compunction)—the way a single word stuck in the box
Of a sentence engineers the thing up along the ridges of high canny
Excellence with nothing beyond faith and folderol and a sturdy tendresse
In its delivery “system,” and how dirt in that system makes it go unnoted
Yet.

Donc, the whole of my weekend “output” pitoyable. The straits of demands various and seasonal.

Kerouac, slipping into tensile Whitman viscosity of the stretchable universe, says (Visions of Cody): “I am here in the same moodway as Cody, fast, talk to everybody, no ‘dignity,’ speed, kicks (I only know, that is, I strictly know what I know and that’s why sketching is not for my secret thoughts—my own complete life, an endless contemplation, is so interesting, I love it so, it is vast, goes everywhere—).” Is it simply result of reading Whitman (a little, of late) that he floods every other particular I see, Kerouac, too? See “Fish-Shape Paumanok”—

Starting from fish-shape Paumanok where I was born,
Well-begotten, and rais’d by a perfect mother—
O to go back to the place where I was born,
To hear the birds sing once more,
To ramble about the house and barn and over the fields once more,
And through the orchard and along the old lanes once more.
. . .
I am integral with you, I too am of one phase and of all phases.
I too Paumanok,
I too have bubbled up, floated the measureless float, and been wash’d on your shores,
I too am but a trail of drift and debris,
I too leave little wrecks upon you, you fish-shaped island.

“Once more” and “I too” and “perfect mother”—isn’t something like the whole boyish history of American letters copped by all that? See Leslie Fiedler’s Love and Death in the American Novel—and throw in Twain’s “lighting out for the territory” motif (here: “a trail of drift and debris”). See, too, jazz structures (reprise, chorus), bop (blues) longings for re-integration and return. Kerouac, soon’s the next page:

I’m going to talk about these things with guys but the main thing I suppose will be this lifelong monologue which is begun in my mind—lifelong complete contemplation—what else on earth do I really know unless I’m depriving myself of kinds of knowledge that would bring out those qualities in me which are most valuable to others; not me, although I keep thinking what’s good for me is equally good for any of my intelligent friends—Last night in the West End Bar was mad, (I can’t think fast enough) (do need a recorder, will buy one at once when the Adams hits New York next March then I could keep the most complete record in the world which in itself could be divided into twenty massive and pretty interesting volumes of tapes describing activities everywhere and excitements and thoughts of mad valuable me and it would really have a shape but a crazy big shape yet just as logical as a novel by Proust because I do keep harking back though I might be nervous on the mike and even tell too much.)

That epithet “mad valuable me,” the recorder—pure Whitmanic mania. (To note: Kerouac’s grandiosity is in deference to a possibility, the secular beatific blessed vision of a whole, “the most complete record in the world.” There is no mere size-queen giganticism to it; he is not “working on a project,” he is not out to make something noticeably (self-satisfy’dly) “big.”)

When the recorder itself (“the matcheen, the machine”)’s rev’d and running, the concern (in the mouth of Cody Pomeroy, the Neal Cassady maquette) becomes less one of “the compleat”—Cody’s mostly obsess’d with the authentic (versus the “skeletonized thing” of rehash). (Is the source of Ginsberg’s “first thought, best thought”—express’d where exactly “first,” and when—why do I think it’s writ somewhere as a dictum of a mid-’seventies July 4th?—is its source right here in Cody?) Out of Visions of Cody, Cody yakking (about retelling a story about a bed):

So I have to tell him, I’m just sayin, those words, remember certain things led me to think of all this, here, which wasn’t anywhere, as I said, it’s just like even now, as I told in the story about the bed . . . I didn’t really feel it was anywhere but it wasn’t any-thing. In fact it was—what it actually was, was a recalling right now on my part, a recalling of me having either told about or thought about the bed concretely before, see, so therefore I, all I did now was re—go back to that memory and bring up a little rehash of, ah, pertinent things, as far as I can remember, in little structure line, a skeletonized thing of the—what I thought earlier, and that’s what one does you know, you know when you go back and remember about a thing that you clearly thought out and went around before, you know what I’m sayin, the second or third or fourth time you tell about it or say anything like that why it comes out different and it becomes more and more modified until it becomes any little thing that you say. . . 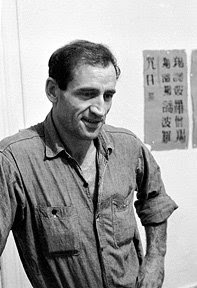