Some Notes on Lyn Hejinian’s “The Distance”

The River at Delhi

LXXVII
The fields completely denuded now, and the fresher green
Isn’t in evidence much, a pentimento of green under the rough
Straw-color’d coarser grasses that’ll slough off with the push.
Denuded of snow I mean. Push of green. Cecilia
Bartoli is barking out a series of high-pitch’d notes, an implacable
Stairway of notes descending into some lower ruminant region
Where the oboe signals for the tenor’s story about the wolves of
Gubbio, something like that. Home, I flopped down to read about Grace
Hartigan’s Pallas Athena portraits (classical temper’d air the result of
The tutelage of Barbara Guest). It’s possible that getting overly caught
Up in thinking about that (and how the sky’s shiny whiteness look’d
Like the belly of a smallmouth bass) made me fall to sleep briefly
Enough that, waking, I recall’d the gruff-impeded voice (with a hint of
Slobbery looseness that probably got mistook for mere
Lasciviousness rather than a shy man’s radical impetuosity) of James
Schuyler reading “Hymn to Life.” Particularly where he says something
About “spring hints and wintry arrears” or compares the sizes of
Monuments, or, with a nomenclature born out of love of the world’s
Smaller inhabitants, the furry and the succulent, mute onlookers to crazy
Human doings, refers to the “mouse-eared chickweed,” a hardy returning
Thing.

10. One’d do well (I suspect) to trace and record (thinking of the lumbering dinosaur “concordances” assembled in pre-computer-rife days) all the references to music in Lyn Hejinian’s “The Distance” (in Saga / Circus). Though I don’t immediately assign Hejinian to the highest ranks of “writers with an ‘ear’” (I think her complicated rhythms occlude any too splendid tonality—she’s a drummer, polyrhythmic, off-beat, jagged with hard salients and plush with sibilants by turns), I think she attends to music’s possibility for sheer meaning-registration to a T. (Yeah.) She puts it more clearly (part XXIV):

It leaps
From under a sheet and mumbles a sound that might have been a word—
It was probably not. It is late
Afternoon before it hesitates. It says something
Inseparable from what it doesn’t say
But of course that would be the case—we’re talking about music.
A buzzer goes off.

That saying of “something / Inseparable from what it doesn’t say” is a kind of saying of the all, isn’t it, a fine-tuned nigh-invisible dialectical spin? (I see I fall into a visual perception / interpretation of the phrase: I am picturing a card turn’d rapidly, spun between two strings. On one side of the card a basket; on the other a ball. The way the spinning puts the ball in the basket.) Elsewhere (part XII) Hejinian speaks of “the sound in the sounds” and notes (part XVIII) how “the distance . . . / Presses against the distance / With the force of music—loud with drums—nothing / Interrupts us—we are in an interruption” and parallels that state to “clarity / Which is perfect and perfectly refuses / Dialectic.”

11. Is (musical) sounding itself—beyond aural décor, beyond ornament—an investigatory “tool,” a means of thinking? It is, in “The Distance,” associated both with the sea and with the distance. Here (part XIX):

The sea
Is never silent—it subjects one to sound—the at the only name I know
For the distance. It has noisy spans.
They rumble and splash as the ropes pong
Against the stanchions, the decks roar
With cold. I know these words.
My thoughts are dead without them.

And, in a lovely stretch (part VIII): “It’s not quick / Thinking that will save us. The constant commentary of the sea is so slow / The simplest remark can take it years / To utter.” I begin to commingle the tropes (I think it’s right to perceive the turns and turnabouts so): the sea, sound, the distance (and the vessel call’d The Distance), thinking, writing—all truculent undertows ongoing, white noise out of which things emerge, get examined, plunge back. Another example (the tenor of the metaphorical vehicle cut loose):

She is called the Distance and we go where she goes and arrive
Willy-nilly at times and places of whose existence we’d known nothing before
And which therefore, though we come upon them inevitably, we reach
Involuntarily. There
Is always somewhere and always in or at it
Something—whether material or musical—

Metaphorical thinking. (I persist in sensing some upheaval of Hejinian’s means here. In a seemingly autobiographical sketch, recalling an aunt who call’d champagne “sham pine,” Hejinian, labelling the aunt’s airs (and flights?) those of “a mock soldier and a real fool,” claims: “I took things literally; I equated the literal with the authentic.” No longer?)

12. What to do with the lines that gender metaphor-making? “We are used to being reviled as makers of metaphors / And feared. Men have accused us / Of witchery. . .” (Part XI).

13. It’s hard not to read some parts of “The Distance” as simply (simply?) enumerating the ups and downs of Lyn Hejinian’s writing life. So often there’s the buoyant “sense of well-being, excitement, and resignation—all of these / At once but separately”—that rakes at one’s familiar. Or, there’s a kind of (wryly humorous) assessment (of a career? Of a troublesome period of doubt?):

Whited-out, I despair
Of getting myself right and if that’s not the despair
Of the vain I don’t know what is.
Humorlessly the humorless cook has been trying
To force me into explanations. I communicate
Nothing. It could be I’m lazy,
But no one has said as much. I have a stack of pages to my credit, after all.
I’ve drawn elevations, projected horizons, balanced rocks
On waves, and I can declare that in both there is as much past as future. But what
Of the present? I’m projecting horizons I can’t see. I might as well be writing
Novels, it being the point of fiction as of science to enable us to perceive
How others live, how other things are.
They exist like us, alone.

“They exist like us, alone.” How to read that? With a tone of, what, dismissive reassurance?

14. I thrash and reiterate. Cannot quell the swoll’d up wave-lashings of the piece, cannot make it into anything pocketable. No need for that. Still. I did not explore the way history loops through “The Distance,” or a war is somewhere out there, or all the places where a thing is wrapped around by itself (“Doubt grasps / At the very thing / It doubts”) or the sentences that one puzzles together (or dissects) like a tangram (“Life can’t be studied / As if it were the nonlife of something / Lived by someone studying.”) I like this (amidst much else, it should be obvious, I can’t stop quoting for the pleasure of putting the words down, letting words heap up vociferous and sightly). I like it largely for its sense of balance (rocks on waves, life and “onslaught of / Meaningfulness”) (Is there a pun in that first sentence, “my life” and My Life, the way the writ inevitably inflows into (torques, diseases) the writing and the life?):

The first element
To impose its influence on me was my life. But life cannot stem
The onslaught
Of meaningfulness. I’ve committed
That to paper, ‘that of which one cannot speak,’ ‘I’
Registering a boundary. That’s sentimental
Which is what all ruptures generate
And all gaps demarcate
And there’s no ‘and so’ nor ‘but’ nor ‘meanwhile’
That can limit the irony. Irony is the limit. 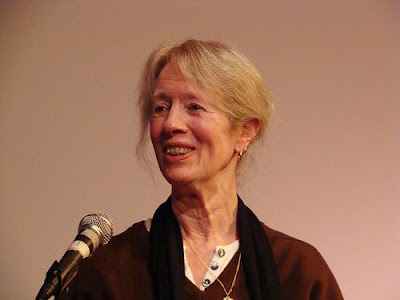