Jeff Hilson’s Stretchers (Reality Street Editions, 2006) collects two earlier Writers Forum chapbooks of twelve (2001) and twenty-one pieces (2002) with an additional twenty-one new “stretchers” (it is a Hilson-invent’d form) and a terrific essay call’d “Why I Wrote Stretchers.” Some “rules” and constraints glean’d out of the essay: “Each stretcher is nominally a 33-line unit,” a decision made for reasons “ultimately banal, based on [Hilton’s] age at the time of writing the first set.” “The poems incorporate a lot of found material . . . much of it (though by no means all of it) verbal detritus heard or seen on journeys through this city.” “Pillaging cheap secondhand texts for material enforced another kind of reading which was partial, discontinuous and manic.” “Page 33 of texts became for a time a focus.” “The opening is a measure for the rest of the stretcher not necessarily in terms of content, but certainly in terms of (line) length. This is what gives stretchers their shape. If stretchers have a constraint it is that they can’t be too wide.” “All spelling mistakes are deliberate.” “Each stretcher tells a story and each story contains many other stories.” Hilson calls the stretchers “ruins, constructed ruins,” and he “tried whenever possible to avoid the ‘effects” which line ending can produce . . . They are tatters, ragged flags.” Too, there’s a fine considering of “Artaud’s famous letter of June 5, 1923, to Jacques Rivière” wherein (in the Bernard Frechtman translation) Artaud writes:

I suffer from a frightful disease of the mind. My thought abandons me at all stages. From the simple act of thinking to the external act of its materialization in words. Words, forms of phrases, inner directions of thinking, simple reactions of the mind—I am in constant pursuit of my intellectual being. Hence, whenever I can seize upon a form, however imperfect it may be, I hold it fast, lest I lose the entire thought.

And adds, of the “ungainly phrases . . . ungainly expressions”: “I have not questioned them. They come from the deep uncertainty of my thinking.” Hilson, of the opening line of each stretcher, notes that each “‘sounded’ right . . . though mostly they were those imperfect forms of which Artaud speaks. They ‘bothered’ me as a ‘bewilderment of noise,’ a phrase turned over and over in my head. The writing down of the opening line momentarily stilled the noise, gave it some sort of clarity, though the necessity of deciding what to do immediately after getting it down made it impossible to dwell there for long.” A terrific descrying of the writing impulse, its doggish lock-jaw’d seizure and its demands and correspondences fit and “unfit.” Here’s the first of Hilson’s stretchers:

. . . the sawing man I fear for his legs
red white red white and he has years
this road they will dig it and widen the pave
tho it is not oxford street it is said
the rich must now walk on that side too
for graffiti there’s dogshit it’s a kind
of writing can be scried an inventory
taken of say colour consistency and
I won’t have this neighborhood
fears of a mass break-in nor pay
for inside when you can have sound
from over there (where was angry)
the phrase “phenomenological night”
and hedges such as do you know
what I mean the word hedge is new
and used everywhere by ladies like
albert ayler’s music for circus and
as in hedge-school and hedge-bird
and hedge-priest as in hedge-bantler
on the right or wrong side of the
hedge takes a sheet off the hedge or
is on the hedge regardless of others
the hedge-creeper he’s a creeper crept
into a hedge for the hedge-police
would catch him for his creeping and
the hedge of hawthorn was as a cloak
to hide the creeper gone aside from
the straight way the shifter and shuffler
his means of protection as in the dancers
bottom right of bosch’s garden their blind
owl-headed dance buried in a tusked bud
schal or schil rind and quarrel these
briars and brambles will protect you . . .

All the stretchers begin and end with ellipses, evidence of being scoop’d up out of the Voloshinovian stream of speech unceasing. The sense of burrowing down in a distance (or, with cue off free-jazz innovator and tenor saxophonist Albert Ayler, blowing a while) and getting into “hedge-story” (hedge a fine semi-permeable word, keeping out and giving way à la fois, a place of concealment and a boundary, and a word sock’d into all manner of phrase and proverb, “to take a sheet off a hedge,” meaning—I learn—“to steal openly”—Hilson likely tossing one eye at the O.E.D. amidst the onslaught of making.) That Hieronymus Bosch makes a cameo turn suddenly makes “The Garden of Earthly Delights” into a musical romp, its own kind of fury of blowing. Is schal “scarf” and schil “peel” or “rind”? The hints of reproach for misdeeds, the hiding, something in “the straight way the shifter and shuffler / his means of protection” (not “means of production” thought that echoes in there too) reminds me of lines of free-jazzist John Berryman (working, too, off hand-made charts), and I see (looking) that I am concatenating two “Dream Songs”—1 and 29—thinking of “Huffy Henry hid the day, / unappeasable Henry sulked. / I see his point,—a trying to put things over.” And “He knows: he went over everyone, & nobody's missing. / Often he reckons, in the dawn, them up. / Nobody is ever missing.” It’s eye-opening (in entirely different ways) to read Hilson’s fleet missive of the first piece’s “history” (I quote lengthily: it fucking soars):

Stretchers began partly as a response to Chapter 1 of Lights Out for the Territory where the author Iain Sinclair quickly crosses what he calls “Dog island” dismissing it for its lack of graffiti because “there’s no surface rough enough to take the pen.” The Isle of Dogs—faux-isle as Sinclair notes—is home to many of the stretchers and I, an invader on the wave of the area’s “redevelopment”, house-sat there for over 15 years. I took offence at Sinclair’s totalising attack on the isle’s “smooth” Thatcherite credentials and began, petulantly, to think about all the mounds of dog shit there as a kind of interruptive writing which induced in the walker a state of constant paranoia: “for graffiti there’s dogshit it’s a kind / of writing can be scried an inventory / taken of say colour consistency” I wrote in the first stretcher. It’s as simple as that. The word “swipe” occurs a number of times in Lights Out for the Territory though never the result of a white Reebok passing through one of these pliable deposits. The meeting of shoe and shit seems to me as good a way of thinking about the stink of transaction as some flat plastic moving through a PDQ machine. Both leave a permanent stain on the fetishized object. But I get beyond myself. “Trapped in a isthmus of signs, not language,” Sinclair could have found a whole new language not only by reading the walls but also the pavements, pavements smeared by shit and cracked into Cobbing-esque pages by years of neglect and truckloads of super-slim soldiers feeding the area’s “regeneration.” O Brave New World that has such language in it!

“I get beyond myself,” indeed. That’s just unbelievably great. And stretcher-story’d itself. Later, Hilson talks, too, about Mark Twain, the opening Huckleberry Finn report on The Adventures of Tom Sawyer’s being “mostly a true book, with some stretchers.”

I wager the later stretchers move with even greater velocity and turbulence. Hilson begins using the parenthetical mark as a kind of virgule / caesura (with a tendency to point to the aside, the aside to the aside). Here’s one out of the final section of the book:

. . . go litel guns of april yr
pop pop for grief (repeat
the queen is not dead long
live zombie closedown
long live the arch long
live our stiff sons & all
yr shiny cunts long live
the young sailors stick it
in every night for the r r p
all over pink and stepping
on it with their wonderful
life of lights out (sleepy
head we salute you and
your fierce boys which
buried the wren which is
a common stutterer and
nothin but a tweeny which
got caught up in a bush
singing one of the f-family
& what if you could see
this in your house & what
& then what as being nearer
as the sun setting in that
the cold in it (one person
and another there there
under the stair one by one
dropping or marching or
even stalking like a long
legged bird which is in the
field (or between standing
& stamping it does drop
& rushes in with brick
& stones . . .

A love of repeating—“pop pop,” “there there”—evident in other stretchers too. And the tiny catalogue of “long live” echoing (in its wry speed and carouse) Frank O’Hara (I’m thinking of “we don’t like Lionel Trilling / we decide, we like Don Allen we don’t like / Henry James so much we like Herman Melville / we don’t want to be in the poets’ walk in / San Francisco even we just want to be rich” among others.)(Or am I getting O’Hara out of “we salute you and /
your fierce boys”? who except he so casually uses “salute”?) No matter. It’s a terrific book, narrow to the hand and tallish and flexibly put together for innumerable readings. 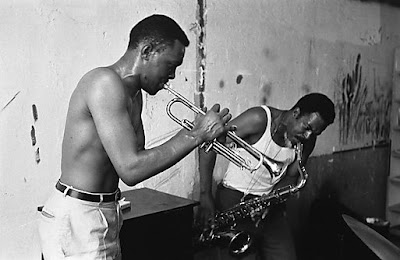 LXX
A dog laps
the dry lip
of the moon-
mimicking park’s Mare
Imbrium, unpester’d, I
see that. A
hinny she-ass
cross rips gobs
of pokeweed out,
Isle of Dogs,
mille neuf cent
soixante-neuf, oh
fuck off cunt
with the invent.
A gent with
a boater like
a platter topping
a pucker’d seersucker
tosses a cheery
ta-ta rear-
ward descending off
the double-decker.
My working title
is “To Prats”
and is dedicatory
“to the phenomenological
right.” That means
any of you
object-orient’d round-
heads who fail
to see corporeal
need in making
a thing up.

Probably evident enough that the Isle of Dogs (I cannot picture the place, or even where the place’d possibly be), though prior to that a dip into Merrill Gilfillan’s River Through Rivertown (The Figures, 1982) provided me with Mare Imbrium (Gilfillan calls it “Sea of Lip” and I commenced a vivacious wonderment regarding that word imbrium, got to “overlapping” &c.) though where the dog enter’d, aucune idée. Jeff Hilson says (in one of the “stretchers”) something something “phenomenological night”—I misread it initially as “right” and so hopped a train of thinking that led to my wondering if the “experimentalists” (obligatory nod to difficulties with all current applicable “names” for “us”—or “them,” depending on one’s “stance”) didn’t, coming out of what? the Objectivists? the ongoing inexplicable preference for metonymy’s partial approach as opposed to metaphor’s relational one?—didn’t, I say, put the kibosh on the imagination (“making / a thing up”). I know it’s the case for the collector’s (and assemblagists) of details, the bus rider school. Arguably it’s the case for the collector’s (and assemblagists) of lingual muck, the Google school. The conceptual punters’ too-too study’d “critique” of creativity and the imagination (it’s not, it’s boy petulant nay-saying, tantrum-material, as American as snake oil or con royalty of the Duke and the Dauphin pedigree), that’s just rehash’d (just examine the clothes) radical chic feeding institutional insecurity (sort of like Lenny Bernstein “entertaining” the Black Panther Party and the Mau Mau of Roxbury). Oh, well, hardly any of that’s in the poem.