LXIX
Henry James with herpes zoster—
I cringe a little at
the term “revisit” coyly apply’d
by galoots in scruff-casual
kit (say, scat-black leather
at the departmental bash, or
cowboy boots embroider’d and tool’d)—
“I see an absolute need
to revisit Maisie’s doings with
the indomitable Mrs. Wix”—announces
one (without “unpacking” it) and
all I see’s need’d is
for James Brown to commence
shouting “Maceo . . . Maceo . . . Maceo,” clown-
reckless with the mike stand,
“embrouillé” in cape and cord.
And Maceo keeps blowing choruses,
he’s a machine, girds up
shenanigan and grunt. “Miss Barker,
new amanuensis, practices typing at
the Remington. Shingles always act
to deploy one’s own moral
snobbery,” says The Master James,
if I recall rightly, though
I’d likely put Woonsocket, Rhode
Island in Massachusetts, so maybe
I had better look again.

Read a chunk of Jack Kerouac’s Doctor Sax, mouth-open, breathing. I recall I bought my copy off a remainder table somewhere near Ft. Lauderdale, Fla. in 1972, a hardback Grove for one dollar. And never did read it. (I got a Black Cat paperback of Satori in Paris with a remainder punch-hole in the corner of the cover, pick’d up in Ithaca, I think, same “era,” maybe Grove sluff’d off a booty in that period, I don’t know.) I’d gone down to Florida with a guy by the name of Nick Rorick, he and I were writing poems that spring in a class with Jim Bertolino, Rorick out of Toledo, had a rust-color’d Datsun wagon (I think) and a slip’d-away high school girlfriend down there, living in a bungalow with a new boyfriend and working at a Burger King. L’Invitation au voyage meant injecting oneself into some sad impossible pulsating despair of no-recovery, no-reconciling cover’d over with bounteous stupifiants and intoxicants, a whole ten days or so of a cornucopia of leaveners, drug-city Ring Around the Rosy. (I do recall missing out a sack of cocaine because, tired of the cramp’d digs and constant horseplay, I’d trek’d off to a local branch library (Oh, la) and sat at a table perusing J. D. Reed’s Expressways and a tiny pile of William Carlos Williams.) (Too, I recall rheumy yellow-eyed jokes-abound with Murine under black light—tequila, salt and shot and lime suck—thinking I’d swim straight to Africa before the mescaline hit, and the ocean water growing terrifyingly warm as if it were no longer touching my body causing me to turn about and thrash mightily straight to shore.) (And trying to stay unreasonably straight for one night so’s to muster the energy to manhandle the Datsun wheel home (Exterminating Angel sap-scenario of being helplessly caught in the bedrug'd bungelow.) Somewhere in there I bought the book.

Beyond the joys of pure rhythmic clatter and shift, isn’t there in Kerouac a breeze willingness to come spoutingly close to nonsense, as if the present American vernacular simply cannot contain what he’s saying. I love the moments—kin to a blues guitarist stretching a string, pulling out a long blue grace note, or air-thrashing amp-tight in full-feedback, making the electronic overload do the talking—where Kerouac simply makes up the words, little splurges of talking in tongues. Phrases like “spluttrous inheld explosions of dont-laugh” or “lamplit oil house flimmered in a glub of night trees” or “incarnate dirt behung in drapes of grain by level deep doop dung” or “spermatazoing in all directions” or “a rosecovered cottage flat on the dreaming lurps and purls of the Merrimac” or (swimming in that Thoreauvian stream now bedung’d):

—where regularly you saw lumps of human shit floating—I have nightmares of swallowing a cud of crap when I get up on my half rock and point hands to dive, by God I learned to dive by myself by half submerging to my waist—but there’s these turds floating in the river of time and I‘m ready to sprowf myself one up, flubadegud—

Think how precise “half rock” is, and “point hands to dive” and how “sprowf” rejects the thing it ingests, a visceral gag-reflex of a word: it’s the all-assault precision of Kerouac that allows in things like “river of time”—just another springboard (abstract) cantilever’d out over the all, another dive into it. Does it—Kerouac’s racing pulse, picking up whatever sound-confab comes along the ear-ways—fit in against Clark Coolidge’s sense of Free Jazz—“these guys made a time where there was no strong or weak beat. It was all like one-one-one-one-one-one-one to infinity. In other words you could play anything at all over that time, you could go anywhere and not worry about how to come back”? The other thing, the pure velocity of Kerouac’s writing (“open-mouth’d, breathing”), how it’s stripped down to a clatter of imponderably stark single-syllables, hard-edged, knows its tempo impeccably. Here, a miniature ballgame in a bottle (metonymy wins):

. . . high grass waved in the redness, Lousy piped from third base, flung me the double play ball, I pivoted on a hinch and flung around back to first with a hitch and dip of my shoulders and a whomp into first high hard straight,—Scotty at short on the next tap scoops up his grasscutter with a motion as still as an Indian about to shit, holds the ball gravely in his meat hand before I know it and is flipping me a softie over the keystone which I have to come in charging synchronized with the Scotty ball a foot off ground, which I do with meat hand and still running (and with passing foot-tap as sack) flick under my left side (with all my might to join the firstbaseman’s mitt with my straightline loop of reasoning hurl—which he (G.J., eyes semiclosed, cussin, “That fuckin Jack sinks me on purpose with his dusters”) scoops mid of earth with a flop of his long leftleg and his other bent in for stretch . . .

Clipped short i’s for quickness: so “hinch,” so “hitch and dip,” so “still as an Indian about to shit”—all that writing accumulating with a “reasoning hurl,” that is, the writing-body, instinctual desperado, working perfectly out of high practice (and so: in on act). 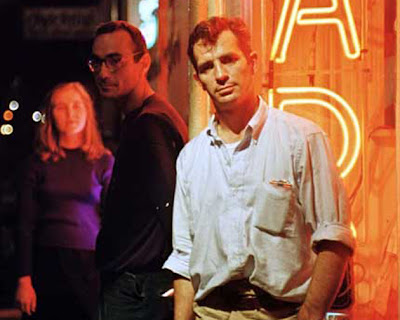