LXXXII
Or the sun, yellow yolk of an egg, slides up into the pan of
The sky. Crocuses open in a single day, perform local musters
And manœuvres. A day of general yard work is declared. We
Pull down the dry pea vines, collect the winter-down’d limbs
In twine-awkward bundles, rake leaf-debris out of the beds.
The present tense, we go over it again and again, using a different
Verb. A small black dog with a snaggle-tooth (it pokes out like
Cigarette butt) goes by, by the name of Ranger. Possibility of what
The organism perceived itself being being annihilated led directly
To its sense-rendering lexical inventions with compensatory stifling
Of usual song. We turn the worm-clench’d compost up, scoop
Muck (with odd oak seedling unfurling) out of the gutters. Car radio
Strains of Eddie Harris plowing that reedy tenor down under
Les McCann’s long-legged piano lope, “Shorty Rides Again.” And up
In the hundred year old oak with its constantly furrow’d brow, red-belly
Splutter.

Impertinence of Monday morning, the weekend shot, the day unseasonably cold, though clear, liquid ball of sun with the deep orange—blood orange tint of the egg too “gone” to consume—of expect’d afternoon finery. Unh. What a weekend is good for: a veering. Uncover’d a terrific book about whaling (amongst other things): Logbook for Grace, by Robert Cushman Murphy. Murphy, just out of Dartmouth, aged twenty-five, in 1912 ships out on the U. S. whaling brig Daisy (dying days of the industry under sail). He collects roughly 400,000 words of notes (he’s collecting specimens, observations, and data for the American Museum of Natural History and he’s writing a log for new wife (they’d marry’d a few months before departure) Grace Emeline Barstow: out of the notes’ll come the unsurpass’d two-volume work, Oceanic Birds of the South America (1936), countless articles, and, in 1947, the Logbook. The voyage lasts a year, the Daisy beginning at the Caribbean island of Dominica, working its way north through the Sargasso Sea to roughly the latitude of Charleston, South Carolina, east across the Atlantic, south to the Cape Verde Islands, back across the Atlantic and down along the coast of South America to South Georgia Island, and back north mid-ocean. Here’s what Murphy calls the “motley assemblage” of books he brought along:

What I find stunning is the breadth of Murphy’s knowledge and interests. (In the dragging listless hot days of going north (in order, apparently, to catch good winds and weather to go south) through the Sargasso Sea, he reads (and assesses) a good number of Shakespeare plays (and a number of books of the Bible), he quotes Dante, he recalls some verses of Latin. (The Ridgway Nomenclature (nothing I recall seeing word of): Murphy reports examining the skin color changes of a dying dolphin: “The mouth and the side fins were heavily edged with Antwerp blue,” and adds (rather jocularly): “These hues are not figments of imagination, but might better be called “pigments of precision”! I noted them by direct comparison with the plates in Ridgway’s Nomenclature of Colors.) Some large part of the book’s appeal lies in Murphy’s palpable delight in and observations of natural history (though match’d by details of crew behavior, and whaling “technique”). So one learns of the Dominican Hercules beetles (call’d the “spin-saw insect” by the locals): the name out of an island legend that the beetles “clamp their long jaws on the bough of a tree and fly around it like a whirligig until they saw it off.” Or reads of the behavior of terns call’d brown noddies foraging over a shoal of porpoises, how the birds rarely “plunge into the water but merely stoop toward the surface and, with inconceivably swift coordination, seize in midair the tiny fishes that leap out to escape their submarine enemies”:

The porpoises were after big fish, the latter after little ones, some of which the noddies caught on the bounce. Among them were also twenty-three man-o’-war birds, equally on the lookout for anybody’s disadvantage. Thus does a fierce competition in the water and the air above work toward a kind of cooperation. No wonder that sailors imagine a sort of league between porpoises and birds, because they play both ends against the middle.

Is it Pound’s injunction to “look” (the “Minute Particular,” the “Luminous Detail”) that one sees in reading Murphy? Recall the story of Louis Agassiz’s insistence on describing (not naming) as a way toward knowledge—in Pound’s ABC of Reading:

The proper METHOD for studying poetry and good letters is the method of contemporary biologists, that is careful first-hand examination of the matter, and continual COMPARISON of one “slide” or specimen with another.

No man is equipped for modern thinking until he has understood the anecdote of Agassiz and the fish:

A post-graduate student equipped with honors and diplomas went to Agassiz to receive the final and finishing touches. The great man offered him a small fish and told him to describe it.

Post-Graduate Student: ‘That’s only a sunfish.’

Agassiz: ‘I know that. Write a description of it.’

After a few minutes the student returned with the description of the Ichthus Heliodiplodokus, or whatever term is used to conceal the common sunfish from vulgar knowledge, family of Heliichtherinkus, etc., as found in textbooks of the subject.

Agassiz again told the student to describe the fish.

The student produced a four-page essay. Agassiz then told him to look at the fish. At the end of three weeks the fish was in an advanced state of decomposition, but the student knew something about it.

By this method science has arisen, not on the narrow edge of medieval logic suspended in a vacuum.

Here’s Murphy’s description of what he calls “an unearthly little fish, the size of your thumb”—the mousefish, or sargasso fish—that hides in the weeds of the Sargasso Sea:

I found two of these mousefish or sargasso fish, strange little composites of mouth, belly, and excrescences. They are painted with facsimiles, and fringed and pimpled with reproductions, of various parts of the weed. Two tasseled fish poles on the head are probably used as bait to lure prey toward the gulping mouth. They have both arm fins (the pectorals) and foot fins (the pelvics), and the latter stick forward under the belly like spread feet perpetually ready to hit bottom. The arm fins work like hands, bending at a wrist and folding ten long finger rays around anything of which they wish to lay hold. As they clamber around in a clump of sargasso weed, like lizards in a thicket, it is no wonder that they are difficult to see because the pattern of brown, orange, gold, and white resembles both the vegetation and its other animal inhabitants and, moreover, the fish can change the basic hue of the skin to match the general tone of the background and can even imitate the detailed pattern of the weed.

(The Sargasso Sea “forms an area as big as the United States, all enclosed within the currents of the North Atlantic.” Murphy says the water there is “clearer than any pool or spring on earth,” “no mouldering fleets of galleons caught in the tangles; neither are there twigs or straws afloat, nor silt suspended in the water.”) 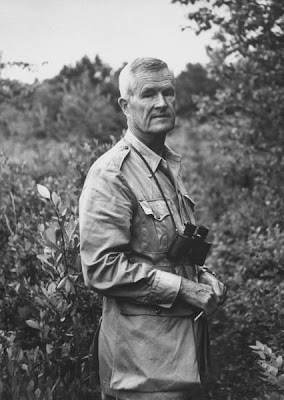