Some Notes on Lyn Hejinian’s “The Distance”

LXXVI
High maudlin hincty,
that’s one way
to put it.

a veil, a
“never heard the
likes of that.”

Impresario with cheroot,
with cravat, with
a direct line

to ignominy’s kitchen
(dishing out hash-
browns and reds).

“Girl, you work
that Facebook” is
one thing I

a habit of
mind.” He puts
no board flat

against another & achieves
an uncommon rigidity,
support’d by nails.

1. In the opening lines (in the first number’d section) of “The Distance”—in Lyn Hejinian’s two-poem book Saga / Circus (Omnidawn, 2008)—is an implicit nod to William Carlos Williams’s “no ideas but in things” follow’d by an emphatic (and rather uncharacteristically petulant (a foot-stomp for Hejinian)) dismissal of the powers of metaphor:

Knowledge grows
But it has to be connected to things.
That connection is usually best achieved
So they say
Through perceiving similarities. No way!

Why, then, is the poem chock’d full of figure? Nigh immediately one encounters “forbidding clouds of hemlock and pine, a forest that was / Like a terrestrial sky.” If the story is a particularly gender’d one of a woman “Banned from ships as if I were fate / Herself”—note the personification in the opening lines—for whom “it came about / That the ban to my surprise was lifted / Suddenly one fall / And I went to sea after all,” is something being suggest’d regarding the gendering of perception? And what exactly is it?

2. I start’d with “The Distance.” (I’d read—and heard Hejinian read—some parts of “Lola”—the “Circus” part of Saga / Circus in the Belladonna-print’d chapbook of that title. It—the look of it—is Williamsesque, too: the Williams of the jumbled chapters of the experimental prose works, Spring and All or Kora in Hell or The Great American Novel.)

3. Is it “merely accidental” that “The Distance” comprised thirty-seven number’d sections? Hejinian’s My Life in its first (Burning Deck) version contain’d thirty-seven chapters (each of thirty-seven sentences).

4. Hejinian makes it plain in “The Distance”’s second part that if—in the new found world of the ship (the ship, too, named The Distance)—things seem knowable with a kind of animated immediacy (“The planet seems young—raucous, ravenous, quick, and wet. The planet exists / With gusto. Things fall to it and sink, things are rooted in it / And rise,” it is the emotions (“Obscure emotions”) that remain beyond the epistemological horizon, veil’d, undefinable. Hejinian:

It’s impossible
To clear the way and come within
Sight of my subject. Obscure
Emotions cling to it—obscuring emotions. The analytical imagination
Naturally undertakes analysis of the imagination
While the emotional imagination does what, emote? I’ve tried to give emotions
The slip
By attributing them to other people
Named Felix, Sasha, Nils, Miroire, and when a new one
Rises I will call it Sam
Or Angelique, an iffy strategy
At best.

6. Late in the poem—in the thirty-sixth section—there’s a rather disturbing reply to the “iffy strategy” of naming (and mustn’t it, too, “apply” to metaphorical larking, knowing things by similarity?) Emotion, in Hejinian’s terms, comes to seem a void:

There’s only an inside to an emotion, there’s nothing
On it to grasp, nothing
To be seen of it, it’s nothing
But a structure without a form, a structure incapable of producing
A form, I feel all that I feel but there’s nothing
There, nothing
Could be there: an emotion is held
In an absence together only
With the strength of an interior—anterior—presence.

I hear Cordelia / Lear in the repeat’d “nothing”—both Lear’s “Nothing will come of nothing” and Cordelia’s “I cannot heave / My heart into my mouth.” There is, too, something of the same thrilling integrity to Hejinian’s lines (here and elsewhere), thrilling in a poetry world of Gonerils and Regans.

7. Too, I hear John Ashbery (particularly the Ashbery of “Self-Portrait in a Convex Mirror”). Think of lines like these:

and the thoughts
That peel off and fly away at breathless speeds
Like the last stubborn leaves ripped
From wet branches? I see in this only the chaos
Of your round mirror which organizes everything
Around the polestar of your eyes which are empty,
Know nothing, dream but reveal nothing.
I feel the carousel starting slowly
And going faster and faster: desk, papers, books,
Photographs of friends, the window and the trees
Merging in one neutral band that surrounds
Me on all sides, everywhere I look.
And I cannot explain the action of leveling,
Why it should all boil down to one
Uniform substance, a magma of interiors.

Put that next to, say, these lines of Hejinian (out of section XXIV):

We are a tilted species
Dipping and lunging forward, swinging our baskets
Of eggs, stuck to our shadows
Which gravity in turn sticks to life
Throughout the long days that night disarrays.
The fog is taking shape, it is forming
Gulls and longshoremen, dolphins and cities
It sweeps from a sliding circle
Whose circumference lies beyond the edges of the field
Of vision by which we are engulfed. It leaps
From under a sheet and mumbles a sound that might have been a word—
It was probably not.

8. Hejinian’s working a terrific line, one that’s willing to go “out” to magnificent ends, or stop short, break off, entirely, blissfully flexible. I want to call it a glacial line—it picks up everything in its path (and’s capable of eventually depositing it anywhere). Never compell’d before to attend to the line-breaks: here, the highly enjamb’d lines work up ambiguity, irony, wonder, by turns. “But I am throwing off conviction, bound / To regard the sea.”

9. Troubling, still, the workings of metaphor. If Hejinian (presumably attempting to plumb an emotional state, or identify with it) writes—in a whole slew of quick-outing “feelings” (disbelief, ambivalence, scorn) in section X—of:

thinking of the hateful
Regret rescued from a log somewhere
Off Tierra del Fuego three years ago and now
Confined to a stinking cage
Which she (Jane thinks she’s female) filthies (she even shits
In her water dish) and into which I stare
Without being able to discover any grounds at all
For affinity.

And it continues, later—“we are stuck / With Regret”—and I want to ask how that’s any different from, say, John Bunyan’s Christian allegory Pilgrim’s Progress with Hypocrisy (companion of Formalist) or Timorous (companion of Mistrust) or Pliable trying to avoid the Slough of Despond? 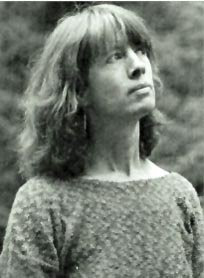