LXXXIV
“The sun is a locked door.” That’s Lyn Hejinian again. One’d do
Well to collect all the receptacles of the heavenly bodies. Soleil
Cou coupé. Self-ignited pyre. Benzene rinsings. Is it Stephen
Crane who hangs the red sun up in the sky like a wafer in undeflect’d
Tint of canny Christian minstrelsy? One’d say bronze grommet, bolus,
Buckler. One’d say chicken. Funny how I listen’d today with casual intensity
To a soup of “content” supply’d by the usual denizens of the scriptorium—
The one with the pale blue boots, the tall one (he sound’d tall), the one
With a girlish voice (whose proposals seem’d to get quash’d pre-
Anticipatorily by dint of mere delivery—that and, it’s likely, the sexual
Pecking order, the recording made thirty years back when the cultural
Capital of the participants ran fluid and uncongeal’d, opposed to the no
Doubt temporary but somewhat “stiffen’d” positions of the present
Moment wherein the girlish voice’s accrued it capitally, by the bundle)—
And the whole savage parade tuck’d me down into the dander’d realms of
Glib impertinence. To say tree in lieu of Paulownia (with its tall
Upright panicles of mauve or white flowers, a tree named for Russian princess
Anna Paulovna (1795-1865), queen of the Netherlands) makes the rope of
Seeing slap loosely along its pulley, hauls nothing (or everything) forth.
The two goons of Horace, dulce et utile nowhere in that constraint-
Free and meaning-constructing tree. Oh perennially woody tree of the palpably
Inert, earth-nuzzling tree bury’d in swamp-plumbing impiety, post-
Radiant sinecure of the soulless rut, Mr. Nowhere Tree. “The sun is a
Hammer.”

Part of Pound’s logopoeia was that some words lead you to expect certain words following others, and so you should as a poet try to disrupt that habit.
I don’t try to write paraphrasable poetry, but what good poetry is paraphrasable? Something like Beckett’s Unnamable is the most unparaphrasable book I can imagine, and that’s its great worth and beauty. It actually is those words, and it can’t be other words. You can talk endlessly around it, but that’s not what it is. You can say that it’s about a guy who isn’t sure that he’s got anything more than a mind. He makes up a few stories and they don’t quite work out, and he ends up saying, “I can’t go on, I’ll go on.” That’s the plot. Unless you want to talk very elaborately about the way the pronoun shifts work, that’s about as close to a paraphrase as you can get.

(And where’s that Robin Blaser line: “The whole thing: just trying to be at home. That’s the plot”? Is that in The Holy Forest? It’s a terribly fine shrug-seizure of domestic clarity presence and acceptance, ungodly placid, I love its seeming admission of a tiny aspiratory route—that is decidedly enormous, the “whole thing.”) (I am jamming: looking for a stitch to drop. If I sully the early evening hours with the number’d categorical sass of “A Year” and plop down into Kerouac’s Visions of Cody with two freshly-brew’d cups of coffee and go at that for some hours and tumble out at five-thirty into nowhere rainy-buffalo’d morning: means no clear cut meadow to pitch a tent in.) I did (Coolidge, again) study a little “at” The Rova Improvisations (Sun & Moon, 1994). The genuinely taciturn (a “sense”) Coolidge remarks:

These writings were begun in the process of preparing to compose the liner notes for ROVA’s album, The Crowd. They exist as two parallel surges of improvisation. The first written while listening to all the tracks of ROVA’s albums in the order of their recording. The second while reading through those initial writings. One written in the hollows of the music. The other in the silence of the words.

I say “at”—meaning two things. One is to notice how nearly all the writings of the second order expand, as if there were more elbow-room to seeing (words on page) than to listening (ROVA music leaving little word-debris in the “hollows.” The other is to try to decide if Coolidge compleat’d the initial “surge” before turning to the second. And did he keep the page of the first present (a reference iconic) during the second bout? Mechanics, yes. The desire is to see (in the pieces) glacial marks (scrapings, deposits) of the compositional strategy. Look, here’s one call’d “The Removal of Secrecy” in its two (tempt’d, Beckett-head’d, to say, “fizzles”):

the one in which he finally meets
Spiny Norman
words sprouted, caked
up from roars of the tube
waves peace of the reason
that no lights truly match
the difference is the human

One’s hesitant to clad any of that in attempt’d paraphrase. What moves I note (meaning source-to-target manumittings I “follow”—how one phrase releases another in its unbound trajectory): some combo of “penciling” and “animalia” outs the cartoonery of “Spiny Norman,” and the mutual small shifts of the final lines—“then they are people” and “the difference is the human”—that’s (to me) more Coolidge responding to (imitating) the logic of the first version (in similar vernacular), a different kind of bump. (None of what I say considers the relation between original music and first surge, or trace-memories of original music in second surge, obviously. Yesterday I did plow around to uncover some ROVA pieces and listen’d in—shrills, hums, bumped, a line—inevitably writing to music falls into its easy-grace sonambule vocab, of course. The other “danger” is the onomatopoeic, that Coolidge avoids.) One hits the wall of words: “sprouted” (out of animated Norman); “tube” out of (for me) “code light” (cathode rays illuminating some recess in my 1950-60s childhood, the TV picture collapsing into a sentient all-seeing dot slowly dying); “peace of the reason” with no counterpart, thinking rational temerity “don’t rock the boat,” thinking imaginary typo (embraced) for “season” . . . (One’d do something if he took a piece of writing and wrote “off” (“in the silence of the words”) it in innumerable successive waves, devotional and transformational, I mean hundreds of “one-offs” all beginning with a single (ancestral) piece.)

I have read your book d’un trait. There are lots of wonderful things in it (by the way, you often use the word “wonderful,” as you do in real life). You have given your “I”’s copulation-mates such formidable defences—leather and steel, gonorrhea, horse-gums—that the reader (or at least one reader, for I would have been absolutely impotent in your singular little harem) derives no kick from the hero’s love-making. I should have as soon tried to open a sardine can with my penis. The result is remarkably chaste, despite the frankness. 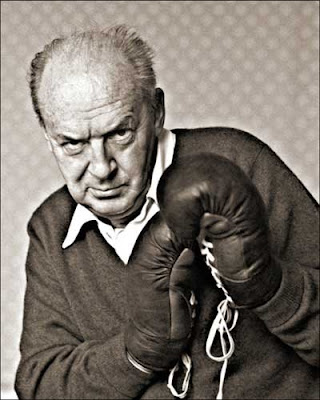