LXXXV
Phrase level fittings. Giancarlo running through the Mendelssohn for
The umpteenth. And if I were sitting against a lordly tree with a notebook
Reverencing the masterwork—“though it hung off the gallows pole”—
Like that nappy gap-tooth man who stab’d a cocksucker for shouting
“I am the tempest!” and “providing onerous unnecessaries.” Ah, the human
Ungodly beast, bulwark and effacer of us all. Final curtain tragedian.
Coming to the point. A whittler’s discourse. Noncommittal nodding.
And if I were elbow-prop’d and moony against a wisteria’d balustrade
Overlooking a grand oceanic quay where Senegalese boys routinely out-
Manœuvre’d the douaniers. Night’s brisk commerce. Sass-inflect’d way of
Snapping a butt into the street. Dog pawings of sleep. What to construe
In the ruck of scuff’d particulars, what opposing armies to exalt, all of
Us tagalongs, spur tracks, orphans. There’s a story Melville only
Browsed through a book of Emerson’s “in Putnam’s store,” though
Mardi is all plenitude and lack, bold scribbles of trash-
wrack’d genius, holy-loathsome pull’d down out of the Zeitgeist.
And if I were pound numbly. Portuguese concierge. Hôtel Résidence sur la
Terre.

Saturday night is when those things that haunt us beyond our speech and the formations of our thoughts suddenly wear a sad aspect that is crying to be seen and noticed all around and we can’t do anything about it and neither could Cody; and to this day he, older and after all this time, goes now haunted in the streets of Saturday night in the American city with his eyes torn out like Oedipus who sees all and sees nothing from the agony of having lived and lived and lived and still not knowing how to conjure from the pitiful world and the folks around some word of praise for something that makes him grateful and makes him cry but remains invisible, aloof, delinquent, complacent, not unkind but just dumb, the street themselves, the things themselves of life and of American life, and the faces and hopes and attempts of the people themselves who with him in gnashing map of earth pronounce vowels and consonants around a nothing, they bite the air, there’s nothing to say because you can’t say what you know, it’s a void, a Demosthenes pebble would have to drop way long down to hit that kind of bottom. [Kerouac’s Visions of Cody, composed c. 1951-52]

And even should his start off, his heart that is, on its waltz, in his ear, tralatralay pom pom, again, tralatralay pom pom, re mi re do bang bang, who could reprehend him? Unfortunately we must stick to the facts, for what else is there, to stick to, to cling to, when all founders, but the facts, when there are any, still floating, within reach of the heart, happy expression that, of the heart crying out, The facts are there, the facts are there, and then more calmly, when the danger is past, the continuation, namely, in the case before us, Here there is no wood, nor any stone, or if there is, the facts are there, it’s as if there wasn’t, the facts are there, no vegetables, no minerals, only Worm, kingdom unknown, Worm is there, as it were, as it were. But not too fast, it’s too soon, to return, to where I am, empty-handed, in triumph, to where I’m waiting, calm, passably calm, knowing, thinking I know, that nothing has befallen me, nothing will befall me, nothing good, nothing bad, nothing to be the death of me, nothing to be the life of me, it would be premature. [Beckett’s The Unnamable, 1958 in the Grove Press edition]

34     Then with balls swoled up one hung low leaving the action snake no biggern at, Oi, the lone woe of Lee Lucky his basketa pittykats earthquaking peoples balls outa sight & leaving nothing but tremble-under-the-bed, the grace in Orlando turned out to be a gentle wee heatwave & a little shit (O shut up and say it!)

Sliding around (typing around—there’s an enormous amount to be learn’d about writing by the simplest acts of transcription) a hunch. In the index to Kerouac’s letters, two mentions of Beckett: one (June 7, 1957, to Ginsberg and cohort) refers to “that dumb Rexroth article . . . in New World Writing no. 11 where I’m ‘in his small way’ peer of Céline and Beckett”; the other (September 1960, to Ferlinghetti) postscripts “I’m enjoying Beckett’s books.” I’d consider’d (intend’d) to pull down some flashes of Clark Coolidge, too (particularly out of The Crystal Text for Beckett-echoes), and, uh, didn’t. Et puis, one’d look vainly for evidence of Beckett’s reading Kerouac? I’d put down money he didn’t. And why? 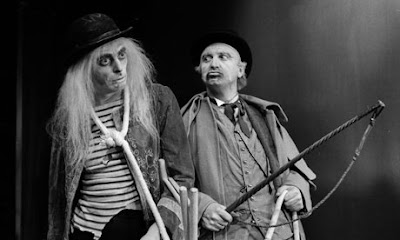