LXXXIII
Dumbly: the plod whiteness of the clamshell vault of sky. The
Chemical vault. Green nub shoots, the cankerous arrivistes
Of spring. To heck with floody dam manœuvers, steering muddy run-
Off into ditch-canals, to hell with splashing after pollywogs and peepers.
Out with gooey kid remorse and goon-squad stories: the skunks rout out
The grubs, we see the evidence, torn roots, the spindly monocotyledons
Of a dying republic, and every ass is toxic. All the bank’s assets mount
Up to nothing but a kind of pig’s dignity and there’s no recourse
For loss: except to re-run the same grainy loop of counterfeit film
(Slo-mo stutter-stop up to the moment of the soundlessly ripping fireball
And the “scooter man with the bandanna” peeling off down the rue Obligado)
And to the leave it to the public trust (or some appoint’d rep, some stony-
Robed figure of Justice, chest pierced by a broken-blade sword blind-
Fold slipping down to expose one bale-deadly piratickal eye) to shout
“There he is again!” and call it the makings of a new fucking common-
Wealth.

Oh I don’t know. Seemingly caught in a steady downpour of furtive diminishing time, constant scrambling, misused moments, sack’d hopes. Concert offering of Aaron Copeland’s Appalachian Spring last night, its way of working by the phrase, scattering the phrases around the instruments, sense of frenetic doodling and enforced abeyance (something sexual about the waiting) and only in a few late measures of whole loud orchestra togetherness and abandonment into the Shaker Joseph Brackett’s 1848 “Simple Gifts” melody, a momentary cohesion and drifting off to part-playing, lulling, somnolence. Home, I tender’d my remaining minutes over to Kerouac (again, more or less), scruffing through some few pages of Visions of Cody (I did wake briefly at the sound of it hitting the floor, and decided to snick off the light). Earlier, I’d dabbled around in Victor-Levy Beaulieu’s Jack Kerouac: a chicken-essay (Coach House, 1975). And Beaulieu’s reading Visions of Gerard (and falling asleep): “(that tremendous reader’s fatigue hammers away as I read steadily on, because how can you sleep when Gerard is dying in his father’s old house? How can you sleep when white phantoms leap on you to take away the little bit of life that’s left you?)—so this was the sentence that stayed in my eyes: ‘None of it is even there, it’s a mind-movie’) and then the book fell out of my hands, I went to sleep. . .” And I think of Kerouac-comrade Philip Whalen’s “A continuous fabric (nerve movie?) Exactly as wide as these lines…” and New American Poetry note that “This poetry is a picture or graph of a mind moving, which is a body being here and now which is history . . .” and I think of O’Hara’s “You just go on your nerve. If someone’s chasing you down the street with a knife you just run, you don’t turn around and shout, ‘Give it up! I was a track star for Mineola Prep’” (which is another way of “a body being here and now”) and I think: isn’t that the dialectical crux of the whole smear of phenomenon (and writing)? That whiz-bang (alternating current jumps) skittering that goes up (popping sparky wires where the trolley car’s tenders—whatever the stretch’d up steel-frame “paws” are call’d—bounce along the guy lines) as the body itself flashes between presence and the movie it’s making. Volatility of immediate tangible present slipping away versus the steadying wreck of the intangible moving in (replacing the real). It is all action.

(The other thing one notes, reading Beaulieu (or oneself), is just how ravagingly strong Kerouac’s prose is, its natural tendency to gobble everything around it up into its maw so that one’s own words become Kerouack’d, he shellacks any nearby style to match the sheen and hue of what he puts down. Nous sommes tous des Kerouacs.) (I keep trying to figure dates of composition for Kerouac, like where / where / how did that movie metaphor rear up? and somehow it seems Kerouac wrote everything in one bash of simultaneity, no sequence, no “developing.” Ann Charters in a note append’d to Old Angel Midnight (that distillate of Kerouac, and the wildest) says “By April 1, 1956, the first date in the [Midnight] notebooks, he had been writing spontaneous prose for five years and was in possession of a highly flexible, original prose style.” And a month later Kerouac’s saying to John Clellon Holmes of Midnight: “I don’t know what to write any more, I’ve been finally doodling with an endless automatic writing piece which raves on and on with no direction and no story and surely that wont do tho I’ll finish it anyway while doing other things . . .”) Funny to see, thumbing (I am all thumbing impressionistic scoops today), a start-stop bad pun interjection of Kerouac’s—the kind of the some of the Language boys absolutely riddle they “texts” with. It goes:

And Kerouac’s got sense enough not to make a tic of it. 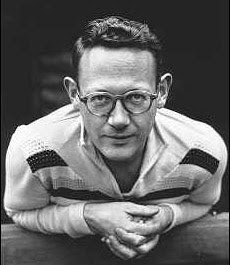