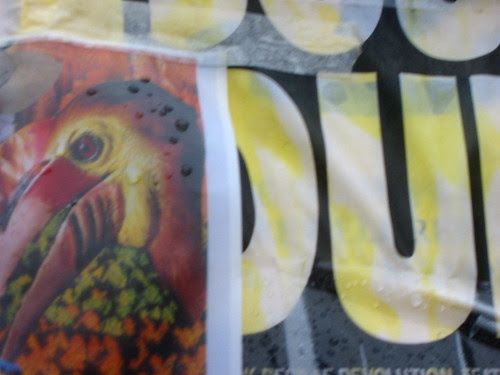 LXVIII
Push’d to the verge
of the century’s unrehearsed
moments, the mind’s tick-
and-swivel commerce with
the world’s appoint’d ongoingness,
vigorous as a city
with its overlay of
razor wire, the compound
leaves of ailanthus—the
“tree of heaven”—signage,
the ordinary glare of
men with little or
nothing to do, no
oilfield, no roustabout, no
fucking half-green tomato
to manhandle off into
its shabby slat-and-
wire box, the kid’s
greasy scooter in hock,
the wife going off
with catatonic slow-mouth
march, time’s own sleek
fly doo-dad frippery
put up in bunches,
conserved against sly reciprocity,
framed for its onus
in tableaux vivants subdued
and redact’d, and scowling.

Pull’d an extemporaneous haul down to Cleveland Sunday in slash-frenzy rain the whole way there—slipping down to Toledo to cross the wide mouth of the Maumee and cut east along pure black bottomland along Lake Erie, flats of Sandusky (isn’t Merrill Gilfillan a native of the parts?) with its shot at the Erie Islands (who puts in at Put-In-Bay? somewhere there there’s a monument to Oliver Hazard Perry of War of 1812 fame, Catawba Island, Kelley’s Island, and the Basses, North, Middle, and South), and Lorain (where we pause to think of Toni Morrison), and every ten miles or so the tires’d catch a puddle and surf a foot or so to keep one honest), and the whole way back, rain, too. With a dippy saucer-shaped “collecting” umbrella (it required occasional emptying), I bumbled around Wade Oval making photographs of a Frank Gehry mess (the only thing I find worthy about Gehry’s structures—design’d by squabbling up a few sheets of sketchpad and examining the “planes”—is the point where the bricks curve, and Thomas Jefferson did that (for reasons economical, a single-brick thick wall with curves equal in strength to a double-brick thick wall straight) with the serpentine walls in the early nineteenth century), the new East Wing of the Cleveland Museum of Art, and the thrilly odd unexpect’d particulars. In the museum: a terrific few hundred photographs by Lee Friedlander, up for examining. Stunning (to me) to see how a Friedlander vernacular’s infiltrated the work of us hobbyists, with its cityscape overlays and reflectings, its pictures of pre-framed pictures (televisons, signs, newspaper kiosks, &c.) Its excess (Derridean sirens calling out something about the “supplement” and I turn my back, too proud.) Friedlander:

I only wanted Uncle Vern standing by his new car (a Hudson) on a clear day. I got him and the car. I also got a bit of Aunt Mary’s laundry and Beau Jack, the dog, peeing on a fence, and a row of potted tuberous begonias on the porch and seventy-eight trees and a million pebbles in the driveway and more. It’s a generous medium, photography.

Isn’t that lovely? Sequences. Of rectangular truck mirrors (generally cutting the picture plane down the center, effecting a kind of classical tripartite organization, one of a parade, single figure band-member in left panel, marching bunch in right, and the center panel recording—minuscule, delicate, otherworldly—what’s behind Friedlander, a dog and doghouse in a tiny wilderness. (Increasingly, Friedlander seems to try to make photographs more and more fiercely textural—a series of cherry blossoms in Japan, thickets with fences intertwined and something beyond all that flourishing detail: skrim, object, and backdrop. The photographs merit more sheer looking than any I know.) (I am less attract’d to Friedlander’s visual punning—the aligning of the foreground’d triangular sign to mimic in reverse the pyramidal structure in the distance, the somewhat humorous interjecting of the photographer’s shadow, some of the “public sculpture” series, the doughboy in Stamford, Connecticut seemingly aiming across the street into the Thom McAn shoe emporium, woman pushing a stroller, only the kid turning back to get the joke, &c.) One emblematic Friedlander? A work label’d “Waddy, Kentucky, 1969.” Three frames in an interior: one of a cowboy (portrait-format) on a television set, one of a framed photograph hung on the wall (dimly lit room), one of a window (framed by gauzy white curtains)—through the window a man (possibly the man in the photograph) is tinkering with an unidentifiable vehicle (farm machinery). No color, ever. (Though the exhibition did include a half-dozen portraits for record cover and such, Friedlander shot—working commercially, early—Ruth Brown, Miles Davis, Aretha Franklin, and an unbearable young and sweet-looking John Coltrane.) Alors. 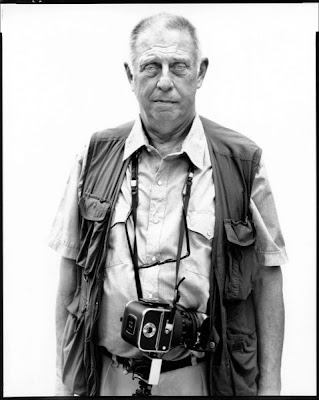 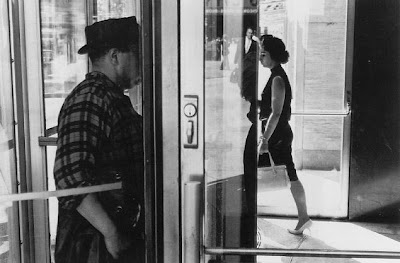 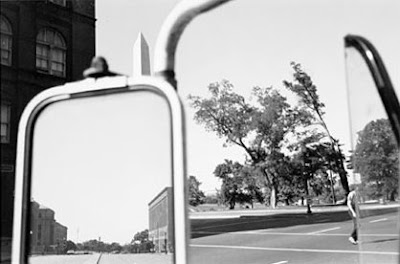 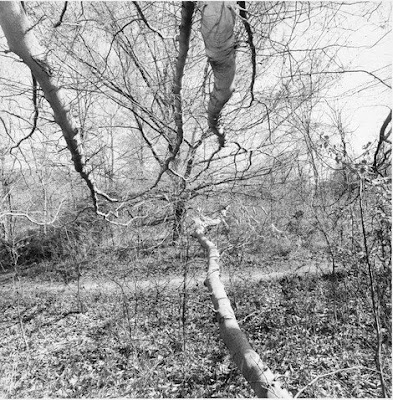