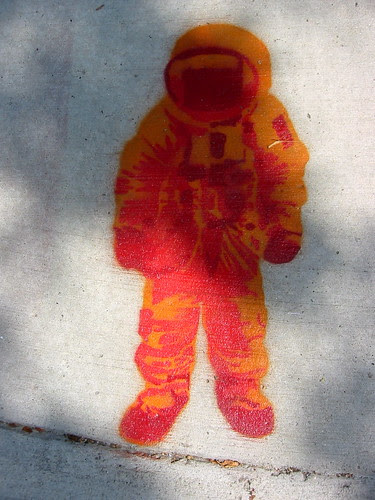 4
A
Box of pure inflect, the
Way one knows a harangue
By a Bible-thumper long
Before one ascertains a single
Word, or is pummel’d by
Loss and its dull blue
Idiocy by another’s farewell monody
Sound’d through a hubbub of
Imprecise and relentless leave-takings.
So one knows the weather
By its impertinent changeableness, the way it scuffs up a perfectly blue sky with drab-looking clouds, and furrows. I scrub out a frying pan and slice a tomato. I pour orange juice into a glass the color of insect-trapping pitch. I look up segotia in the Webster’s: not there. Teetering seems of what is enough. How to assemble a thing that dips into and curdles up the sour whey of time’s meagrest onslaughts (moments it is not “there” at all). I’d better rouse the sleeping boy again. Or the way it is a stopcock for a mind’s rummaging: I know time is not stopped because a sequence of words avails itself of me, my little motor, even if one string’ll get stuck and repeat. Tableaux vivants. Meaning language at a standstill, though well-lit, though in period gear, though reeking of greasepaint and rouge and lime “smoaking” up the loveseats in the boxes and the domed ceiling d’orée’d with stars.
The fetch of the transfigurable,
That’s what makes us tick.
Tedium is the aesthetic strategy
Of the stars, malign whimsy-
Workers, apparel’d in caustics and
Fires, don’t bother with stars.
There’s a burgeoning necropolis of
Stories uninhabitable, nobody’ll ever get
It all down. An orange
Cat hits out at air
And withdraws. Is economics a
Natural phenomenon maim’d by statistical
Over-advantage? Global-figure warp
Speed. I carry a bowl
To the sink.

The Grand Piano #6: mopping up. Ted Pearson segues off Rae Armantrout’s Siren-stomp and ducks into a Greek smithy shed to bang together a latticework of connections and relations: the Siren songs versus silence, that demandingly “empty signifier” filling with one’s own desires; the Sirens and Hélène Cixous’s “the language that women speak when no one is around to correct them”; the Malatestan reversal of Ecclesiastes inscribed near the tomb of the terrifically-named mistress Isotta degli Atti: tempus loquendi: tempus tacendi, what Pound took to repeating in the late botch of Venice (evidence of Pearson’s deft Hephaestan smithing: he notes Malatesta’s intertwining I and S—Isotta and Sigismundo—replacing the usual “sacred monogram” IHS, and riffs: “The H Malatesta places under erasure stands for hoc, ‘this’—from the motto of the Church Militant, in hoc signo vinces, ‘in this sign, you well conquer’—a canny instance of lettristic play we can take to mean ‘not this.’” A fine example of writing Derrida, Pound, Malatesta, Rimbaud, Silliman, Cixous, and Isou—at least—all on one sheet of paper, and proceeding to squabble it up into a toss-ball lacking only a target.) Most of Pearson’s piece works similarly, running high cotton exchanges on “language beyond speech” among some classical stalwarts (Sappho “struck dumb by lust” versus Catullus simply struck dumb), and others. All to resuscitate, long-windedly, though with moments of chilly finesse, the story of the languaged body (and how it tangles with the body of language (“Words’ materially, no less than our own, derives from the very particles and waves that allow us to speak, hear, write, and read them” in one of the more schoolbookish formulations.)

Ah, materiality! One’d think, to listen to some late-century yatterers, it only recently conceived and noted. Think of Sir Philip Sidney’s talk of “fittest raiment,” of poets “not speaking . . . words as they chanceably fall from the mouth, but peizing each syllable of each word by just proportion according to the dignity of the subject.” That obvious sensed weightedness of the word-materiel (reminiscent of Demosthenes talking with ’s mouth full of pebbles): pure materiality. Pearson quotes the Williams of Kora in Hell (“a thing known passes out the mind into the muscles, the will is quit of it, save only when set into vibration by the forces of darkness opposed to it”) and concludes: “Whence, from the actual body that writes, the subject sings of desire.” What if the “will . . . quit of it” is akin to the sapping Doxa, or leveling habit, whatever allows words to “chanceably fall from the mouth” inconsequent and weightless? (I am arguing with myself here: between writing as involuntary physical act of the body, that lightning rod pulling words out of the aether rather indiscernably; and that same involuntary lack of “will” leading only to the spurious and sententious, the unmistakable slush of the period style indistinguishable.) I do like Pearson’s gist of “What, after all, is a literary work if not a lexicon cast in disarray? At issue is what we literally make of language’s constitutive disorder—including statements.” Only question is why “statement” is singled out as a discursive singularity. Seems so male prerogatory assertingly pushy, no? (Pearson quotes Watten: “Language . . . must be the relation of an inadequacy, of a statement to itself. But statements are what I wanted to make.”)

Alarmingly, Tom Mandel quotes Ned Sublette (The World That Made New Orleans) talking (rather indirectly) about the “avant-garde” as “a site . . . of culturally encrypted communication.” I say “alarmingly” as a partisan of Peter Bürger’s vaunting of an historical vanguard defined by its desire to posit little difference between art and everyday life, to whittle down that boundary, realign art’s practice with that of lived life. And Mandel: “the word encryption did get me thinking about places we encode with margins, even frontiers, to mark out what is ‘not for them’ in a world that is ‘not for us.’” (The t-shirt: “You wouldn’t get it, it’s a L=A=N=G=U=A=G=E thing.”) So it’s predictable, where Mandel goes, reminiscing a Chicago youth: Bughouse Square for its Wobblies and cranks; The Sutherland Lounge (in a “black mohair suit . . . wearing shades at night and with my hair combed straight back”) for Miles Davis; and the Gate of Horn for the inaugural Big Table reading (founded in 1959, after “the University of Chicago suppressed an issue of Chicago Review that included work by Jack Kerouac, Allen Ginsberg, and William S. Burroughs.”) Nothing of any consequence occurs in any of the vignettes: a walk down a tenement hallway, through “a service door reinforced with wire screen” and out into an alley (and back); a walk down another (Sutherland Lounge) hallway and out to interrupt Miles Davis mid-cigarette (“That’s all right, man” in “inimitable gravel”); not finding the door to whatever hallway’d lead to “the post-reading party” (“I had the briefest of talks with Ginsberg, only a couple of sentences, and I remember nothing of it.”) Along the way Mandel reports how a “young pianist” says to him: “You really want to be black, don’t you.” And how he, too, consider’d himself (if only partially, a little wryly) “beat,” writing poetry that “reflected in a confused way the influences of Eliot and Pound, Ginsberg and Brother Antoninus, and the poets of the forties I read in Oscar William’s Pocket Book of Verse, especially Gene Derwood.” Cred talk. Mandel’s the “youngest,” one (with ’s friend P__) of “the only Caucasians” (in the Sutherland).

In a “Coda,” Mandel relates an imaginary conversation with Miles Davis wherein Davis talks about CIA meddling in Black Mountain, in Jackson Pollack’s Life magazine notoriety, in Davis’s own kicking of heroin. And, after Mandel theatrically (and brusquely) says “in about forty years, I think I’m going to write

Like participation, perhaps resistance
has been forced upon us too,

Miles instructs: “write it when you know it, and it’ll have a chance.” And adds: “That word you took from your friend’s book title—encryption—that’s an art, man.” Slender jokes about too tight suits, and curtain, man. Is it the presumptuousness of Mandel’s indirect aligning of himself (and the Language boys) with black resistance movements that I find intolerable? It is. And to see it come with a gerry-rigged Miles Davis stamp of approval. One turns one’s back against it.