The Grand Piano episode: What is one to make of this? Barrett Watten, early in the writing he’s muster’d up for numéro six, attaches a footnote to the sentence: “Proofs for the second edition of In the American Tree had just arrived, along with a request for a new introduction to Tjanting. The footnote reads:

The first version of this essay, from early in The Grand Piano process, was published as the introduction to the second edition of Ron’s Tjanting (Salt, 2002). In it, I rearranged the paragraphs from my introduction to the first edition (The Figures, 1981) and interspersed them with newly written material. In this version, I have substituted fourteen stanzas from Progress (Roof, 1985) that mention “body” or “bodies” for the paragraphs of the first introduction, and interspersed seven new, titled sections that question the relation of “body” to “language.”

Chiaro? The “essay” (assuming that means the piece one is reading) is titled “The Turn to Language” and, yes, one recalls vaguely something like that, though damn’d if we’d look it up. I do recall that method: stretching the dough of one’s skimpy “output” into saliences it never meant to address, that is, turning in (recycling) the one and the same ten-pager to several different profs. We outgrew the practice.

Snark city breakdown, what’dja expect? Truth is, one’d probably’ve ignored the whole precious thing if Watten hadn’t subsequently made a point (in one of the “seven, new titled sections”) of how, oh, (beyond) rad and (post) zesty such a re-use ruse is (all the while managing to pat ’s own back):

In Total Syntax (my first critical work, and the first of our school to appear) occurs a careful distinction between technique and method. By technique I meant the sum total of constructive devices that make the work, while method was the extension of technique as an engagement with the world, in the public practice of art (mapping intension and extension as entailments of the work). The work does not remain on the page but is the beginning of a series of acts, of which “interpretation” is only the first. Interpretation could also be deferred and thus constitute the agency of the work, always deferring its interpretation in becoming the site of endless (and public) consternation and projection.

For the “say wha?” crowd, Watten reiterates: “. . . the nonidentity of these terms was what I wanted to stress—that technique is the beginning of a series that provisionally arrives with the work, while method is its conscious re-presentation in different contexts, toward meanings that could never have been foreseen.” (Isn’t, I am thinking, leafing through my zoological specimen books, there a kind of parasite that for sustenance latches on with a powerful absorptive “mouth” to—not its own kind—but its own self?) Watten then claims the technique / method distinction “paralleled much theoretical work of the 70s,” naming Barthes, Eco, Roman Ingarden and Wolfgang Iser. (Uh, yeah, precisely.)

So one supposes that the theoretical comb-over excuses the bald expedience of the practice, then what? (Or, for those who like to nod knowingly: “What then?”) The totality of a work’s “always deferring its interpretation in becoming the site of endless (and public) consternation and projection” recalls a little too strongly, I’d say, recent claims for the requisite endlessness of the “war against terror.” Vigilance without end, deferral sans cesse. One must “attend” to language writing now and forever. The monumentalism of Watten’s proposal is staggering. The final section, titled “Site,” begins: “The body is in pieces; language constitutes a new order of reality; the work is constructed; what can be said of its agency?” (At what point is it appropriate to stop politely overlooking the hints of fascism inhering to such rhetoric?) There follows a fantasy of language writing as kin to the Chinese “classic text, hidden by scholars in dangerous times only to be dug up later.” Watten recalls a “Chinese funerary inscription” reading “The clean air comes from the mountain of things” and, bizarrely, launches into a story of a site, half-shrine, half blogspot:

In Chinese, wen xian would be that mountain, to which all literary production adds; imagine oneself at the heights! This is what history ought to provide, for the careful and long-lived scholar. I think the provenance of history will be otherwise: I can only imagine a return, not to a snow-capped mountain, but to a site that has been constructed of the traces of what has gone before. Such a site would be the work of art as reembodied: in my own case, Progress and Total Syntax; with us, I hope, The Grand Piano. A site continues to create the moment of its method through the technique of its construction, which could be both literary and archival. The site persists; it is a place one comes back to. It makes sense of the time in which it was first intended and all that has happened since. It is material: the primary responsibility of a site is to maintain it. It is virtual: we need to maintain a form of continuous activity on the site. If the site were material and virtual in this sense, we would still need to facilitate its being seen or read. I intend to construct a site in this way, as a work whose meaning is a prospective return. The clear air comes from such a work, as it inscribes the condition of its making as available to other times.

Spooky, no? I picture Mussolini’s sterile cube unassailable, the menacing “Colosseo Quadrato,” high up overlooking Rome. If one approaches it, is one likely to be accosted by “facilitators” to its being seen or read? Reception and its control: “literature,” for Watten, ’s never ceased to be about reception and its control. 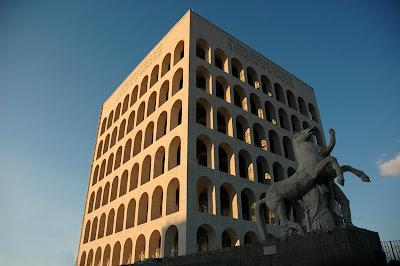 
I want’d to note one other thing. Watten tells a story of the body (“the body in pieces”—or in pain—he busts two bones in one leg in it). It is a story of driving back to Iowa City after visiting Robert Grenier at Franconia College, late November 1971, with Bob Perelman and “a Slovenian poet” who’s at Iowa’s International Writing Program. There’s significant Watten distrust of “the Slovenian” (who insists on driving)’s driving ability; there’s a sotto voce exchange between Perelman and Watten regarding that ability (“my distrust of the Slovenian’s driving skills was questioned by Bob—in the basement of his parents’ suburban home in Youngstown (pool table and hanging lamp)—an early instance of ‘who’s driving the car’; so I let him drive.”); there’s the requisite vindicating fuck-up by “the Slovenian” who skids out on an icy overpass (“not being used to American highways”) and rams a guard rail, precipitating Watten’s injuries. Throughout: “the Slovenian,” nameless, wholly Other’d by lack of name. And, this: “The Slovenian, who has gone on to a relatively big career by Balkan standards, as a workshop poet of moderate notoriety (due in part to the status reserved for international figures of the Brodsky, Heaney, or Simic variety), insisted . . .” Is there more than a mild whiff of nativism there? What are “Balkan standards”? (How do “American highways” differ?) Watten’s broad-brush’d contempt (what “variety” is “Brodsky, Heaney and Simic”?) indicates pettiness, fear, bristly aloofness, a stunning kind of narrowness. “The Slovenian” obviously refers to Tomaž Šalamun, a fact confirmed by Steve Evans’s piece on Bob Perelman written for The Dictionary of Literary Biography. Oddly enough, there the crash is precipitated by a truck suddenly swerving into the car (in Watten’s version the car is “narrowly missed by a truck immediately behind”). One so adamantly concern’d with “agency” ought to ascertain cause with undeniable certainty.