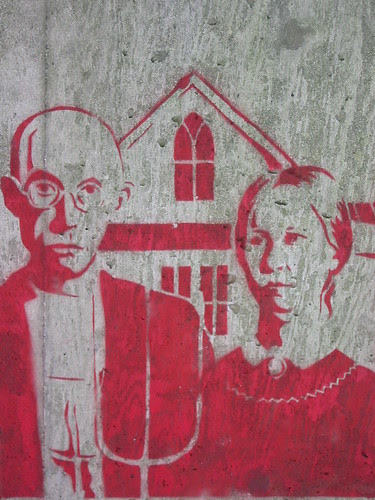 2
Hurrahs for the finite transitory bop of context, reckless and permeable like a Sting T-shirt, its way of letting meaning’s osmotic sluice “have its way” with a thing: so the writing gets taint’d by no retro-fittings, slovenly and torn like a man call’d Cy. Ah, the justificatory ways of erring, whole schools of erring! Angel gibberish, immaterial and nervous. If one’s longing for a signature that’ll lodge itself in a furrow of unspaded earth: paint with paints. Writing is for buffing up the post-honorary and musical like a soul-shouter grabbing ’s crotch.
Everyday I sing the blues
And everyday the black red
Gardenias carry down a celestial
Writing to earth, yellow coronas
Of it, epicurean and beggarly
Both, the way of all
Things. Every day scoots off,
A firecracker in its teeth,
And one square mountain repeating
Its dullard’s gape at sky
That is measured only by
Its passing, it and a
Tree that is a stand-
In for a tree. What’s
A profile for if not
To flaunt? Just now out
In the kitchen I sliced
A cucumber the long way
After paring off its bumpy
Skin, examined the whitish seeds—
Benign uncials sunk in pulp—
With rudimentary indifference uproot’d, with
A sense of vernacular green
Tossing out its primeval taunts.
I did not. Angels puckering
Up in the paintings of
Old Masters made me say
It—the natural world is
Not a book, it refuses
To speak to any of us, and rightfully so. Even if yon torrid apricot of a cloud ought arrive in a fleecy coach to bend my ear with homily and cream, I’d feign not cotton to it! Everyday one reads a page or two of Capital. or some lines “left upon a Seat under a Yew Tree.” And everyday ones writes back, digressing noisily like a jay, or cutting through blue air with a blue slash, oh you interpreter! One story begins with a boy and a girl in a piney woods, off the trail where the downed limbs bank’d up with brown needles make a place for what begins with a pratfall and ends with shyness at the sheer quiddity of things. Everyday haeccity. “Landscape plotted and pieced—fold, fallow, and plough” is what Hopkins writes, a tiny escutcheon of delight with God himself placed at
Fess point. I confess too:
The everyday is uncountenanced and
-Able, it moons up crater’d
And yellow, quince-hoary and
Orb’d, radical in its whelming.
City workers with squared-off
Shovels throw down piles of
Gravel, a stage of street
Repair, and repair to curb
To squat behind thermoses, green.
A truck left in reverse
Beeps a continual cadence of
Warning, unalloy’d it falls into
The understory of noise, or
Is itself punctured, made scrim
And backdrop by one man’s
Sudden yell, or a quieter
Voice talking into a cell-
Phone in the seemingly too-
Animated way one recognizes now
As merely an effect of
The absence of a visible
Interlocutor. Things do occur though: fit conniptions and brisk connivances that mock the continuum, its filial poise, it gracile bent, its toss. “In spumous heave a slavish river runs”: normal history in the bob contingency.

Here’s a moment to cherish: the decision of two members of the self-appoint’d avant-garde, Steve Benson and Carla Harryman, BART-crossing the bay, industrial Oakland to San Francisco, to “some little street in the Mission District” in order to improvise for a “professional respondent to performances-in-progress” (elsewhere call’d a “grant-supported evaluator”). Ah, “I am ashamed of my century / for being so entertaining / but I have to smile.”

Harryman considers briefly, too, the material dispersal and subsequent “registers of communication” of fragments of a poem by Kathleen Fraser, “Bresson Project: ‘Forget you are making a film’” (out of Il cuore: the heart: Selected Poems, 1970-95). She needles the meaning of the second half of the title rather endlessly:

Oddly dated-seeming questions for one who talks of “laboratory-like collaborations” and “structured improvisation—a formal strategy that lends itself to constructing connections.” “Forgetting” sounds positively Romantic. Think of Coleridge’s infamous “fragment, not recoverable, composed, in a sort of reverie brought on by two grains of opium, taken to check a dysentery, at a farmhouse between Porlock and Linton.” During that “profound sleep, at least of the external senses,” Coleridge reports he “could not have composed less than from two to three hundred lines; if that indeed can be called composition in which all the images rose up before him as things, with a parallel production of the correspondent expression, without any sensation or consciousness of effort.” It is Spicer’s Martians dictating. It is akin to Hejinian’s quoting how “Gregory Flaxman, writing about Gilles Deleuze’s work on cinema, remarks, “One must think without an image,” which is to say one must think in such a way that thought outraces forethought (expectation).”

Too, Harryman dislodges a “disavowed” Barrett Watten prose-poem (out of Opera—Works), a dullish piece that begins “Dreamed last night that I had to fuck the fat lady” (I kid you not). Harryman attempts to argue that it exhibits evidence of “a ‘coterie’ poetics of the seventeenth century”—aligning its (minimal) moves to those of “young John Donne and the Inns-of-Court poets who, in reaction to petrified decorums, a culture of sentimentalism, and the nasty politics of the court wrote works characterized by satirical edges, intellectuality, lack of sentimentality, plain direct speech, and argumentativeness—not to mention masculine aggressivity.” That—minus the intellectuality—it does. Whether it is, too, an “attack on certain products of rationality such as Claude Levi-Strauss’s structuralist analysis of exogamy” I’ll leave to Piano readers amenable to that sort of thing. “Coterie can be a useful literary term, as Michael Davidson commented from the audience, after my delivery.”

Harryman’s final pleat in a drapery that hangs there rather truculently, bestir’d by no wind, is a mostly rote reading of an excerpt of an Erica Hunt piece call’d “The Conservation of Volume,” publish’d in Harryman’s magazine QU in 1980. Here is “petrified decorum”: “the work challenges the reader with a refusal to stabilize identity”; quoting Nathaniel Mackey, the “work ‘inhabits descrepancy,’ engaging the ‘imperfect fit between word and world’; “Unpredictability moves through the familial , interpersonal, social, and political spheres breaking the instrumental line of her narrative into bits of a contingent new language.” The work itself, with its “forty-three gloves without mates and in different colors, pinned with dummy pins opposite the stove” sounds not half so deserving of the kind of semi-somnolent critical buzzing Harryman offers it. To what end in the grand scheme of the Piano? Pas aucune idée.