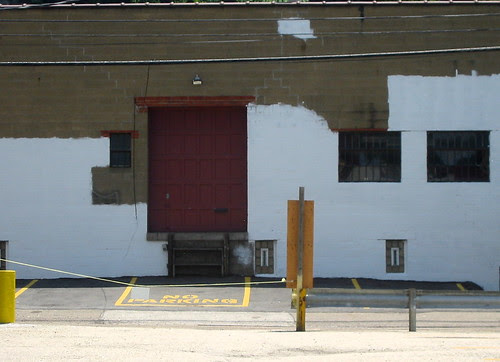 The antirrhinum’s a flower, malleable and porous, “gubber’d and gravid” one longs to say, seeing the tubby bee so gracelessly butting at its fatty “lips” (yellow’d thighs fatted up like a varsity member’s): genus of the snapdragons. I read it in a book sodden with words. Or “sudden.” Effigies of things that bend out under that naming, just as the snapdragon bends out under electrical wires running off a pole twined about by trumpet flowers where hummingbirds hang in the air buzzing like “molecular models atomic,” the kind of syntactical rip-rap Milton’d laid down had that particular (scientific) vernacular got dispatch’d “then.” They are poking long bills into the tubular orange flowers. “Long bills tubular.”
There’s a new spirit raking through
these marble ruins like a mistral, it’s making
us snap our nerve ends cat-o’-nine-tails-ishly
against one another’s imponderable
lack of grace, grace never holds up under
scrutiny. More strange is the dilute way
the roseate afflatus that is the sun balling
down into the ocean out beyond
the columns tints everything with the rinse
and patina of its sinking, mournful
and magnificent like a big horse dying in battle.
The pain is impersonal and abrupt,
I know no better words for it.
Cold breezes rake one’s neck.
Tiny orange carrot-nubs around a mound of duck, a succulent and variegated array, servable, serviceable. The snapdragons nodded and mumbled through the shifting loaves of air, the conversational humps. Three kids giddy in the interstices, mimicking a well-composed retardando in the grown-ups, the slurry, the gross, the fecund, the droop. The furious green light gel’d and wobbled, wore down its changeableness in mock repose, a brown study. Concertina irregular. Living to live. In the boulevard a stretch “limo” uncoiled by, two snakeskin boots angled out one shiny-black window. Blanche, one bystander call’d out, it’s fuck midnight and sun-muddy is the grave.
Arbitrary the bar-
tender one chooses
to spill out
one’s guts to
(voiceover speakeasy din)
in a liquid
moment of satiety,
the razorblade hanging
perfectly cupped in
the tensile dent
where the tall
schooner of oily
gin (and particulars)
brims up high
above the glass-
edge, calculatedly balanced.
Arbitrary, too, the
Scatman Crothers lookalike
(lexical the vocables)
one chooses to
spill out into
the street behind,
recompensed and savvy
with a sassy
jabbing right, a
roundhouse left, a
way of reciting
one’s blood apostrophes
to a new
addition (some lingual
thing) to keep
one’s spirits “up”
and prepared for
the shock of
the controlled “blast”
of a pummeling.

Notably famish’d result of limning idiocy post-long hauling it (again) north and back. A man need traverse the fishing pole punctured stretch of pre-campground highway “between” the lakes in Cadillac weekly? Though to shoot between hummocky cedar swamps deadwood impaled in a light by turns grey and copper—my heart, oh my heart! That hankering cankerous chance of a seeing a harrier spill down into still water, or something bigger. A little reluctantly I “put together” my ten or so books of poetry for Steve Evans’s Attention Span—mostly reiterating noticings made first here at the Isola. Though I love to go through the listings for what is mostly a stunning variety, a “pointings-to” what one’s overlook’d, I resist attempts to turn it into a measure of something (beyond renegade and momentary fervour-blurts, the kind of thing that ought get exchanged by being bark’d out à haute voix across the playing fields or down the mahogany bar, “Read that thing, you’ll love it.”). I recall Ron Silliman making hoo-hah about, I think, the number of appearances (across years, across gender, across ages—you know the statistician’s ruse of niggling up a chance rendezvous into a national hankering . . .) by Lisa Robertson. When it (such listing) becomes a tool of narrowing the thrall, it ceases to be useful. (Insert remark regarding the aptness of its monicker, breadth and pointedness.) That said, I do admit that I did not “admit” books to my list that I attend’d to (at cranium-soaking length, in some cases)—and did so (some’d say) “negatively.” I did not “admit” prose fiction (though I read it interchangeably and for mostly identical reasons that I read poetry: for some perceptible involuntary “rise” the language itself seems to act the voluntary agent for.) To reduce Attention Span to a way of culling out some “leaders” points down the road to group-think, reciprocity, fashion. Isn’t one definition of any intelligentsia (one trading intelligences, that is, news) “part of the population that aspires to independent thinking”? It is, it is.