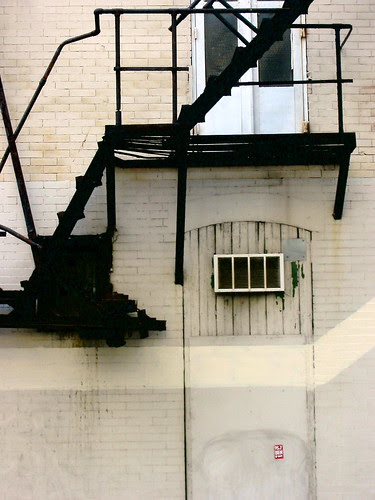 If the writing itself knows
the outcome of one’s attempt
to attenuate its motion or extirpate
its commotion, is my dogging
inspecific a route or a
rout? Determination backs off its
intended end, is a settler
in a desert where God
(that’s one word) nuzzles hazard
and sheer greenery divvies up
the enormity of the light
it cuts into manageable pieces.
At the Hôtel La Fureur
d’Aimer, the skinny torso, too,
is poop’d out. Its tongue
is loud with crisis, stubbornly
it brays out a series
of big-tooth’d haw-hawnnhs,
reminders of its jawing days
at the ur-temple of
Thugga. It is continually making.
It’s read all the books.
There’s an unfathomable lout of
a journalist, a shapeless thing
delivering an off the cuff
rodomontade to a plate of
garnishes, reifying stuff to black
olives, celery stalks, etcetera, and
we, too, a handy couple
of brickbats, eat it right
up. There’s a beer just
the pink-amber of a
wheatfield under a slate sky
in front of me, a
pine-brutal retsina by you
and one hundred leagues of
wasp-infest’d forest between two
capitals and one aimless naïf
to walk it with between us.
Off we go! Jakob Boehme
says no writer ever perceives
the truth, though the greedy
voraciousness of writing itself may
come to lap it up
off the writer who brooks
no quarrel with a pre-
disposition for the sorry fact
that beauty isn’t a métier,
and not we, nor it,
shall endure the coming defunct.

I don’t know. (“I ‘eschew’ knowing.”) Perceptibly colder out. Some assembly required. I root’d about like a peccary in the undergrowth of that thing. Made such a mess a solemn “look” descend’d down my rather imperceptible “brow.” Made the mistake of thinking I was “saying” something. Finally threw the whole idiot lot of words “back” into the barrel and dump’d again, determined to “use” each and every one. My one identifiably “smart” move: to act the bouncer (“I may be scrawny, but I’m wiry like the devil” is what, drunk, I announced to Joe Leopold, the owner of the Royal Palm in Ithaca, New York, and the regulars hoot’d) and toss the “real” out—“That shirt, a blue smocky thing a little short in the sleeves belonging to Anne Bancroft a girl’d loan’d me, she’d lived in her West End Avenue bldg.” didn’t make it, the i.d. look’d a little “funny.” A. R. Ammons says somewhere the available revelations amount to “sound and motion” and the writer’s stuck “moving / and saying through the scary opposites to death.” “Scary opposites” meaning, one supposes, any abiding stillness and quiet. To keep one’s brainbox (it is not a box, it is a wave, or a wind) constantly “indirect’d by the take.” I think of—odd combo, though think how each served as sonar operators on U. S. Navy destroyers during W. W. II—O’Hara’s “the cool graced light / is pushed off the enormous glass piers by hard wind / and everything is tossing, hurrying on up” and “joy seems to be inexorable / I am foolish enough always to find it in wind” and Ammons’s own countless championings of the wind: “In the wind my rescue is / in whorls of it” and “My subject’s / still the wind still / difficult to / present / being invisible.” The two—O’Hara and Ammons—connect’d by each’s emphasis on “moving” (the dance) as opposed to “saying” (the song). I just threw that out. Is it permissible (even if benignly stupid) to lump and split all American poets into two categories? (“Uh, there is a precedent . . .”) I mean, what, Korybantes and Orphéans? Windsocks (sock-hoppers? in that Larry Rivers portrait of O’Hara is he wearing (just) socks, or boots?) and crooners? What is undeniable is how the movers tumble down out of the Emersonian tree, that uproot’d one of “action,” its processual constant wobble and stir “out of unhandseled savage nature”: “That great principle of undulation in nature that shows itself in the inspiring and expiring of the breath; in desire and satiety; in the ebb and flow of the sea; in day and night; in heat and cold; and as yet more deeply ingratified in every atom and every fluid, is known to us under the name of polarity—these ‘fits of easy transmission and reflection,’ as Newton called them, are the law of nature because they are the law of spirit.” (“On the American Scholar”) Is Ashbery a corybant or a crooner? Certainly the reason he leap’d (momentarily) into Harold Bloom’s stable had all to do with the jazz’d “polarity” (“wobble and stir”) of “Self-Portrait in a Convex Mirror,” in its insistence that Parmigianino’s still’d painting (“pure / Affirmation that doesn’t affirm anything”) is insufficient (“The balloon pops, the attention / Turns dully away.”) “Whose curved hand controls,” Ashbery asks:

. . . the turning seasons and the thoughts
That peel off and fly away at breathless speeds
Like the last stubborn leaves ripped
From wet branches? I see in this only the chaos
Of your round mirror which organizes everything
Around the polestar of your eyes which are empty,
Know nothing, dream but reveal nothing.
I feel the carousel starting slowly
And going faster and faster: desk, papers, books,
Photographs of friends, the window and the trees
Merging in one neutral band that surrounds
Me on all sides, everywhere I look.
And I cannot explain the action of leveling,
Why it should all boil down to one
Uniform substance, a magma of interiors.

And the language boys? Corybants or crooners? (Or one-note johnnys.) 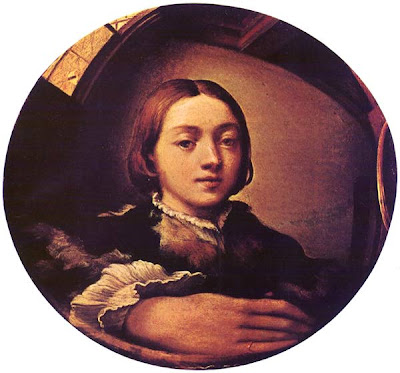