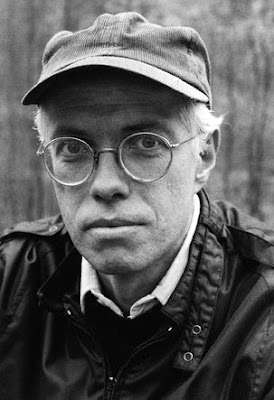 Monday of the duds. Rarely do I begin a thing and scrap it, out of cahoots with its impetus. Doggedness of the stubborn, unwilling to suborn the uncontrived gestural to the commonsensical minions. Today: brusque recommencements, serial surrenderings, a fine tawdry of restless trumpery. Result of the incoherency of sleep. Something about the origin of the list, particularly in its unwieldy wild bloat form, in the New York School. One early model, out of the Ted Berrigan / Ron Padgett collaboratory work “Furtive Days” (Bean Spasms):

I recall seeing Berrigan and Padgett—decked out, along with Tom Clark, in the mock Edwardian pinstripe and paisley of the “era”—read that in Ann Arbor, circa 1968, to accompanying guffaws and horse laughs. Some nights along in a lengthy visit. Some kind of hint of raucous possibility stuck in all the mayhem and madcappery.* The onslaught preceding a similar list of “Death, causes” in Berrigan’s joint writing with Anne Waldman, Memorial Day (1971). A formal gambit (or gamut) old enough to be found, too, in something like Urquhart’s Rabelais. Out of the chapter called “The Games of Gargantua”:

Then blockiſhly mumbling with a ſet on countenance a piece of ſcurvie grace, he waſh’t his hands in freſh wine, pick’t his teeth with the foot of a hog, and talked jovially with his Attendants: then the Carpet being ſpred, they brought plenty of cardes, many dice, with great ſtore and abundance of checkers and cheſſe-boards.
There he played.
At Fluſſe.
At Primero.
At the beaſt.
At the rifle.
At trump.
At the prick and ſpare not.
At the hundred.
At the peenie.
At the unfortunate woman.
At the fib.
At the paſſe ten.
At one and thirtie.
At poſt and paire, or even and ſequence.
At three hundred.
At the unluckie man.
At the laſt couple in hell.
At the hock.
At the ſurlie.
At the lanſkenet.
At the cukoe.
At puffe, or let him ſpeak that hath it.
At take nothing and throw out.
At the marriage.
At the frolick or jackdaw.
At the opinion.
At who doth the one, doth the other.
At the ſequences.
At the ivory bundles.
At the tarots.
At loſing load him.
At he’s gulled and eſto.
At the torture.
At the handruf.
At the click.
At honours.
At love.
At the cheſſe.
At Reynold the fox.
At the ſquares.
At the cowes.
At the lottery.
At the chance or mumchance.
At three dice or manieſt bleaks.
At the tables.
At nivinivinack.
At the lurch.
At doublets or queens-game.
At the failie.
At the french tictac.
At the long tables or ferkeering.
At feldown.
At Tods body.
At needs muſt.
At the dames or draughts.
At bob and mow.
At primus ſecundus.
At mark-knife.
At the keyes.
At ſpan-counter.
At even or odd.
At croſſe or pile.
At bal and huckle-bones.
At ivory balls . . .

And so forth, for another three pages or so. To do a history of lists, the slovenly, the careering, the capacious, the indiscrete, the extravagant, the brash, the impenitent, the unruly, the overweening, the implacable, the brash . . .


* Clark, out of Late Returns: A Memoir of Ted Berrigan (1985), recalling other homages and hijinks during that “weeklong arts festival”:

Ted spent the days in Ann Arbor paying respectful homage to the ghost of Frank O’Hara, who’d written many of his early poems while in graduate school there. There was a memorial reading of Frank’s poems, in which Ron, Ted and I all took part; Ted’s reading was quite beautiful, and not without tears. One very cold day we all walked off campus to the rooming house on South University Street where Frank had lived. It looked like any other ordinary student rooming house on any other tree-lined street in Ann Arbor. We stood there shivering on the sidewalk, trying to share Ted’s glow of holy proximity-with-the-great. It was difficult. Not everybody has that sense of the immortality of poetry.
When we left, Ted stowed in his duffel bag a large desk lamp from his room in the Union. As we waited in the lobby for the airport limousine, Ted was obviously nervous. The officious young man who acted as liaison between the Union and the festival cast a few querulous glances at Ted’s bag, which seemed to have grown substantially in size during the week of the festival. Ron Padgett, who has a highly developed sense of humor, gleefully noted Ted’s discomfiture. The limousine came, we all left, and that was that. Back in New York, Ted installed the reading lamp in his bedroom, where it served him well.
Some weeks later, Ron wrote a letter to Ted on some stationery he’d taken from the Union. He signed the letter with the name of the young student liaison-man. In the letter, he charged Ted with stealing the lamp, and requested restitution. When Ted got the letter, he immediately wrote an anxious reply to the Union man, saying “I didn’t steal that lamp!” Ron then revealed the joke to him. Furious, Ted vowed to get even. I don’t know if he ever did. (His relationship with Ron always surpassed normal human understanding.)