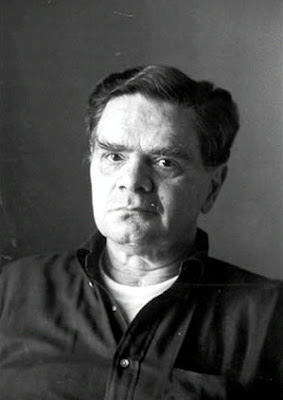 I am glad I did not send you the analysis of your, Frank’s, John’s and Kenneth’s poetry: it would have annoyed you because it was of necessity comparative. Of yours I think that what is good, as well as an accuracy of word—“Words present to us little pictures of things, lucid and normal, like the pictures that are hung on the walls of schoolrooms to give children an illustration of what is meant by a carpenter’s bench, a bird, an ant-hill” is an accuracy of sentiment; and that when you are not good, it is because you censor your emotions, in the interest of Verlainian purity of lyrical integrity; that when you are not good, you are being influenced by your Christian Science background, and that when your emotion is most accurate you do not censor your emotions, but that the emotion is that of that wild party of High School, full of drinking and fucking.*

Aptly quoting the Proust of Swann’s Way (“Words present . . .”), the kind of “lucid and normal” vocabulary Schuyler uses, emblematic and sharp. (Earlier in the letter, Porter’d pointed to other “somewhat aphoristic parts” in Proust (“the parts I like”): “every big thing which we have begun by fearing, because we knew it to be incompatible with smaller things to which we clung . . . does not so much deprive us as it detaches us from them.” And: “to strip our pleasures of imagination is to reduce them to their own dimensions, that is to say to nothing.” And: “so long as you distract your mind from its dreams, it will not know them for what they are; you will always be being taken in by the appearance of things.”) Porter’s “analysis of your, Frank’s, John’s and Kenneth’s poetry” refers to the 1961 Evergreen Review essay called “Poets and Painters in Collaboration,” a review of O’Hara’s Odes, with prints by Michael Goldberg, Koch’s Permanently, with prints by Alfred Leslie, Ashbery’s The Poems, with prints by Joan Mitchell, and Schuyler’s own Salute, with prints by Grace Hartigan—all printed by Tiber Press. Of Schuyler Porter writes therein (summoning Rimbaud against Proust): “James Schuyler is contemplative and compressed; even when he says ‘I,’ the ‘I’ is a third person, as though he we invisible in the presence of his object.” (Oddly enough, it is Ashbery who reaps the aforementioned Proustian metaphor, whose “words,” according to Porter, “are separated from each other with the stiff lucidity of words in a primer . . .”) Of Schuyler’s work, Porter writes (nonchalantly repeating a phrase), and rather tentatively:

Their arguing might be clarifying
to those who know them whom they do not know
as they know us who do not know them.

You see the poet’s inventions, rather than the poet, whose art is in the degree of disinterested attention with which he follows them. He tends toward a deceptively simple Chinese visibility, like transparent windows on a complex view.

Within this head where thought repeats
itself like a loud clock, lived
the gray and green of parks before spring
and water on a sidewalk between banks of snow.

There is a stately gravity of tone, which he makes colloquial, and he has an ear for ordinary speech that turns it into art.

Past is past, and if one
remembers what one meant
to do and never did, is
not to have thought to do
enough? Like that gather-
ing of one of each I
planned, to gather one
of each kind of clover,
daisy, paintbrush that
grew in that field
the cabin stood in and
study them one afternoon
before they wilted. Past
is past. I salute
that various field.

Ending with the astounding “Salute.” (Whose “gather- / ing of one of each . . . one / of each kind” is surely kin to Proust’s words as “pictures . . . hung on the walls of schoolrooms.”) Porter quoting, too, out of Schuyler’s “Royals” (eventually collected in Freely Espousing, 1969) and “A Head” (The Home Book, 1977). Porter, in a letter dated “June 6, 1961,” to Schuyler, regarding the review: “It was only five typewritten pages, but it took me two weeks (not solid weeks) to write. I would spend literally hours just thinking whether the quotations I chose really illustrated what I had said in the review.” Sense of Porter’s deferential ease with Schuyler (combined with something like a tendency for restraint, sauvegarderie)—in the “Friday, [June] 1961” letter: “The odd thing is that I like talking to you only for what you (I hope) will say to me, that talking to you is an attempt on my part to make you talk, so I can listen, whereas I like to talk to Frank, who talks a lot, but to whom I prefer to talk over listening to him. (Rather like a thing being as “clarifying / to those who know them whom they do not know / as they know us who do not know them . . .”)


* Porter’s summoning of the “wild party” seems to echo Schuyler’s “Poet and Painter Overture” in the “Statements on Poetics” part of The New American Poetry:

New York poets, except I suppose the color blind, are affected most by the floods of paint in whose crashing surf we all scramble.
Artists in any genre are of course drawn to the dominant art movement in the place where they live; in New York it is painting. Not to get mixed up in it would be a kind of blinders-on repression, like the campus dry-heads who wishfully descend tum-ti-tumming from Yeats out of Graves with a big kiss for Mother England (subject of a famous Bocklin painting: just when did the last major English poet die? not that Rossetti isn’t fun . . .). The big thing happening at home is a nuisance, a publicity plot, a cabal; and please don’t track the carpe. They don’t even excoriate American painting; they pretend it isn’t there.
Considering the painters’ popular “I kissed thee ere I killed thee” attitude toward Paris, admiring, envious and spurning, and the fact (Willa Cather pointed it out a long time ago) that the best American writing is French rather than English oriented, it’s not surprising that New York poets play their own variations on how Apollinaire, Reverdy, Jacob, Eluard, Breton took to the School of Paris. . . .

(I never noticed before: how the irascible humor, the gregarious asides, the gloves-mostly-on taunts mimic the piece (“Personism”), unused, that O’Hara contemporaneously wrote for the Allen anthology . . .) 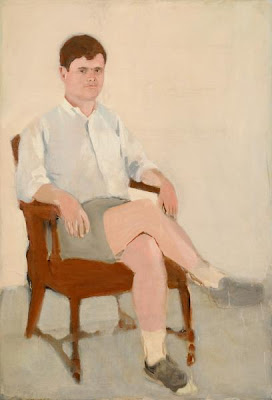 Fairfield Porter, “Sketch for a Portrait of Jimmy Schuyler”