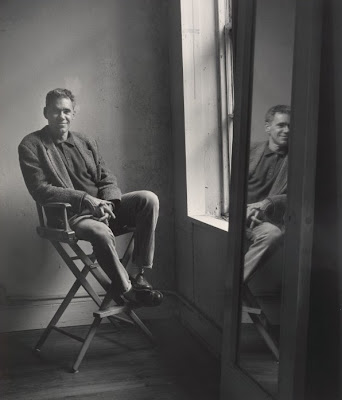 One painting I am totally tickled pink with is a recent Whippoorwill on sofa: as instantly “clear” as Manet, and as minutely fine as a small Degas ballet class: (well, almost). . . .

Painting-wise I have been through so much since I last wrote I hardly know where to begin.
For a while it was mostly a matter of doing very tight and accurate painting; alternated with deliberate attempts at minimal boldness.
Several of my new works are so good it is almost scary. But, alas, good in such a way that they are first and foremost “good painting,” timeless, and by nobody in particular.
However, the past three ones have picked up a lot. The first of which was two small paintings of Whippoorwill where I let myself “draw” a lot, indulging quite heavily in “black and white.” (And only with one large brush and turp.)
Good day No. 2 was my first successful large painting, also of Whippoorwill, using lots of oil and lots of “dash,” with much transparent overpainting, which worked beautifully for getting the pinks and blacks, partly seen and partly “felt,” under Whippoorwill’s thin white coat of hair. He is lounging on the olive green velvet sofa with two patterned pillows. Very focused in. (No eliminations.) Very French. And also a bit, alas, Sargent. Nevertheless, primarily because of its size, I consider it a breakthrough.
Good day No. 3, today, was one small brush, no medium (not even turp). A small painting again, of Whippoorwill again. Where I started out rough, focused in to very fine, and then did some very successful eliminating. The three stages of which I’ve often felt was the process for me (now) but today, for the first time, I was able to bring the tightness back to something as hard-hitting as rough without it’s being rough. A bit, perhaps, like some Degas race track paintings I have seen, where details are somehow more “felt” than actually seen.
And so, right now, I am feeling nicely optimistic. . . .
Perhaps most rewarding these days has been learning (inch by inch) Whippoorwill’s anatomy so totally un-scientifically. Altho I could not carry on a two-minute conversation on the matter, I feel that were I to dissect him there would be no surprises. So much so that the temptation to regard this as “superior” knowledge is very much with me, if I didn’t know better. . . .

. . . Your letter spurred me into a spell of trying to do some larger paintings: actually, two, both of Whippoorwill on a putrid green velvet sofa downstairs, the putrid green of the sofa (so much of!) being one of my biggest problems. However, thanks to what light does to old velvet, one of them is O.K. Rather, thanks to exaggerating that a bit. But, aside from any real basic desire to paint big, my biggest problem probably concerns my preoccupation with an “even” surface, which becomes quite a chore on a large scale. Which probably has something to do with what you were talking about as to oils being basically a bit “dirty” to Americans. But, actually, I don’t mind being rough, or even sloppy, so long as I am totally, and evenly, so. This, however, is not something I’m willing to “accept” yet.

Anne [Porter], by the way, greatly admires your writing. She says the best modern prose writers are you and Gertrude Stein. I read your Jamaica diary out loud, to many laughs, and she said Joe’s writing is clear because he really wants to tell you something, he isn’t trying to conceal anything, like most writers. It’s true. There’s never any fuzz about what you write.

Joe Brainard to Fairfield Porter (out of the letter Lewallen dates “[Vermont, summer 1974?]”)**:

. . . I am sorry about my spelling. I have an odd history with words tho, beginning with nobody being able to understand a word I said: bad pronunciation. Which made me not too fond of words (slow reader, bad speller, and bad studderer) all of which is over now, except that such things do leave their marks, even if perversly so, as in my writing. And as for spelling, that the one thing I haven’t cared enough about to try and improve.
But, actually, I’m no as bad a speller as I appear in letters. To write fast is the only way I enjoy writing. And from experience I’ve learned that to re-read a letter usually means I don’t send it. And so I compromise myself by not having to make the choice.
Words being what they are (pretty fuzzy) I supose we could go on talking about “arrogance” till dooms day. And probably the whole thing (difference) lies in that I can only concieve of arrogance as a temporary state. Like being especially happy , or especially depressed. I cannot conceive on such a thing as an “arragant person.”

March 7th
This morning we went to the agricultural fair in Lucea. Morris Golde said to be sure and go to Lucea. It was only eighteen miles away and a beautiful drive. The fair itself, tho, wasn’t much. Mostly it was empty. There were some pretty pastel decorated cakes. Some 4-H girls all in green. And some other kind of girls all in red and white checks. Loud Methodist music from a Methodist booth. Big pink and orange velvet pillows. And Christmas cards sewn together into wastebaskets and wall pouches. Men pee a lot in the open. The young men here have beautiful rear-ends. There really ought to be a better word for rear-end than rear-end. Bottom. I don’t like bottom, either. Or fanny. Or seat. Or posterior. At any rate, their rear-ends really are beautiful; high and tight and full. There is something very superior about them, and of course, sexy. I just remembered ass. I don’t like ass either. The women here, I must admit, are not so beautiful to me. They really do carry big bundles on their heads.

March 8th
If Jamaica is not as beautiful as I thought it would be, I am not disappointed. I didn’t really expect Jamaica to be the way I thought it would be. And, in all fairness, it’s only a small part of it I am seeing. There are a lot of allspice trees around here. I always thought that allspice was all different spices mixed up together but it isn’t. It’s one single spice called allspice. Also there are pimento trees. Not the red kind you buy in jars but a spice called pimento. As I understand it, Jamaica is the only place in the world that it grows. There is a certain kind of fruit tree around here that if you eat the fruit before it is completely ripe, it will kill you. The flowers around here are not so hot really. Perhaps it’s the wrong time of the year. Some of the leaves, however, are really fantastic. This one bush I especially like has big shiny red and black enamel-like leaves.

Fuzzy words arrayed without fuzz. Clarity of paint. Because I love the paintings of Kenward Elmslie’s whippet Whippoorwill. 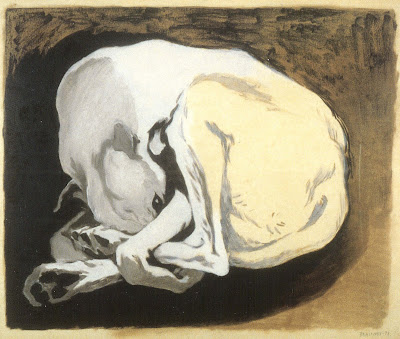 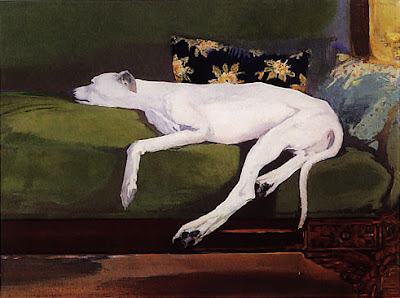