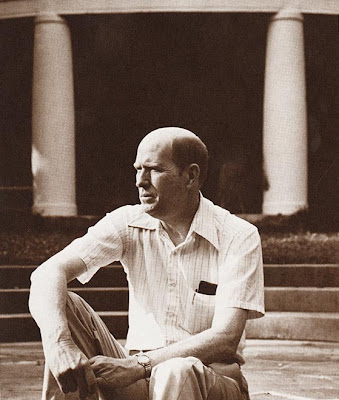 The name Ezra is one of those private associations which poets would be much kinder to leave out. I take it from the name of a classmate in elementary school. His name was Ezra Smith, like me a country boy in a wooden school. I think he was killed in the war. But, to me, anybody with the name Ezra would never do anything but wander. I think of the character as wiry, evaporated, leathern, a desert creature, much soul and bone, little flesh. Too, the word itself is just a little twisted, restless, but soft and mystical to the ear. After having used the name for awhile, I went to the Book of Ezra to see if I could find interesting parallels but found none useful. In 1951 I knew only the name of Pound and was saddened that his name might interfere with me. I know Pound better now and like him. I like to string things together too—trying for “aggregates of unity” as found in nature and event, rather than overall unity, which always seems to me imposed and too artificial. What line to take between nature and art. Because any selective unity (it’s very hard to find any other kind) is bound to be partial, to leave too many things out of account . . . and like Pound I can’t stand to leave anything out. One of my poems says:

I stray. There is reason to think now that there is some Pound in me. . . .

The mind can’t perceive except by limiting, by blocking things off, by naming them. The moment the line has been drawn, fidelity to nature is impossible, because it has no sharp lines, but only the massive events of transition. This is the heart of the problem. If art is the opposite of nature, if art is the means by which wholeness can be realized in the fragment, then aren’t we making a mistake to loosen the form that is to hold the wholeness? It’s just a question, as you’ve seen from quoted fragments of my verse, I’m preaching the opposite doctrine. But, as I said, I’m beginning to feel uneasy about it. There are no ends in nature. But art has a beginning, middle, and end. I can start to work immediately on the second hundred cantos, etc. . . .

Recalling, unmistakably I’d insist, Fenollosa’s lines out of “The Chinese Written Character as a Medium for Poetry”: “A true noun, an isolated thing, does not exist in nature. Things are only the terminal points, or rather the meeting points of actions, cross-sections cut through actions, snap-shots. Neither can a pure verb, an abstract motion, be possible in nature. The eye sees noun and verb as one: things in motion, motion in things . . .” The impossibility of a purely processual verse, like any force perpetuum mobile. Think of Ammons’s poem “Written Water” (out of Lake Effect Country)—with its echo of Keats’s “Here lies One whose Name was writ in Water”—how it conjures a rising out of stasis (and statement) into a purity of constant change:

at last from that death into communion with
things, the flowing free of
grave trenches in rain, the
indifferent and suitable toppling

of stones, the wiping out of
borders and prints, stains, inks;
so that I can abide the
rinse of change as the fountainhead’s

As Ammons put it early (in the “Foreword” to the 1955 Ommateum): “While maintaining a perspective from the hub, the poet ventures out in each poem to explore one of the numberless radii of experience. The poems suggest a many-sided view of reality; an adoption of tentative, provisional attitudes, replacing the partial, unified, prejudicial, and rigid; a belief that forms of thought, like physical forms, are, in so far as they resist it, susceptible to change, increasingly costly and violent.” 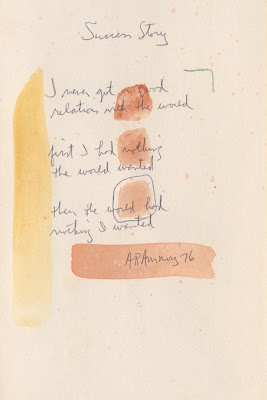