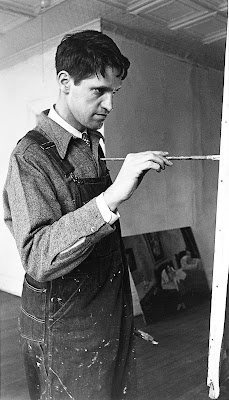 Claustral and nonce is the day, sense of being shuttered up with my druthers. (Oh, for the simple horse badorties to say something affably jive like—James Schuyler, in a letter to John Ashbery, 14 October 1968—“maybe I’ll rustle up a batch of Chewy Noels, as featured in Fanny Farmer.” Or garrulous and bode—Kenneth Koch, in a collaboratory piece “To James Schuyler” writ c. 1956 with Fairfield Porter—“my inspiration needs a Frank.”) I think of Emerson’s glum tidings (“Experience”):

It is very unhappy, but too late to be helped, the discovery we have made, that we exist. That discovery is called the Fall of Man. Ever afterwards, we suspect our instruments. We have learned that we do not see directly, but mediately, and that we have no means of correcting these colored and distorting lenses which we are, or of computing the amount of their errors. Perhaps these subject-lenses have a creative power; perhaps there are no objects. Once we lived in what we saw; now, the rapaciousness of this new power, which threatens to absorb all things, engages us.

No objects but in books, their collateral means, disseminatory and abrupt. My wordless critique.

William Arrowsmith, out of a review of “Nine New Poets”* (The Hudson Review, Summer 1956):

I could make very little headway in understanding Mr. John Ashbery’s Some Trees, the latest volume in the Yale younger poets series, and I take some comfort from what I take to be Auden’s similar difficulties in the Introduction. Whether Mr. Ashbery is, as Auden suggests, in the tradition of Rimbaud and bent upon a new rhetoric, I cannot say for sure; but Rimbaud is here complicated by Stevens at his most opaque whimsical, and, whether or not there is a new rhetoric, Mr. Ashbery certainly strangles any normal rhetoric or syntax of English poetry. At least apart from two or three poems in the customary idiom of English poetic communication, I have no idea most of the time what Mr. Ashbery is talking about or being, beyond the communication of an intolerable vagueness that looks as if it was meant for precision. What does come through is an impression of an impossibly fractured brittle private world, depersonalized and discontinuous, whose characteristic emotional gesture is an effete and cerebral whimsy. (“He is sherrier / and sherriest. / A tall thermometer / Reflects him best.”) Of the poems I can claim to understand (“The Instruction Manual,” “The Mythological Poet,” “Illustration”), I can report a good, though dry, ear, a nice discrimination with language, and a sensibility typically concerned with the liens between public and private, though the liens are normally the more tenuous ones of nostalgia, regret, loneliness, and a half-spoofing whimsical sense of not belonging. Whether these skills are sufficient to sponsor the devotion necessary to tracking Mr. Ashbery into his private lair, I doubt; my own patience at least wore out after several weeks of trying.

Surely one of the earliest, and finest, readings of Ashbery’s style. Printed, too, in a 1991 number of Boulevard. (One wonders if Stephen Burt’s hooplah’d essay “The Elliptical Poets” (1999, though a shorter, earlier version called “Shearing Away” appeared in Poetry Review (London) in 1998) mightn’t have found its beginnings here in Porter’s letter.)


* The nine: Friday’s Child by Wilfred Watson, The Hatch by Norma Farber, The Irony of Joy by Robert Pack, Good News of Death and Other Poems by Louis Simpson, Birthdays from the Ocean by Isabella Gardner, Some Trees by John Ashbery, Exiles and Marriages by Donald Hall, The Moral Circus by Edwin Honig and The Deaths at Paragon, Indiana by John Woods.

I
We see us as we truly behave:
From every corner comes a distinctive offering.
The train comes bearing joy;
The sparks it strikes illuminate the table.
Destiny guides the water-pilot, and it is destiny.
For long we hadn’t heard so much news, such noise.
The day was warm and pleasant.
“We see you in your hair,
Air resting around the tips of mountains.”

II
A fine rain anoints the canal machinery.
This is perhaps a day of general honesty
Without example in the world’s history
Though the fumes are not of a singular authority
And indeed are dry as poverty.
Terrific units are on an old man
In the blue shadow of some paint cans
As laughing cadets say, “In the evening
Everything has a schedule, if you can find out what it is.”

*** Porter is referring here to Ashbery’s “Poem” in Some Trees. Opening: “While we were walking under the top / The road so strangely lit by lamps / And I wanting only peace / From the tradesmen who tried cutting my hair / Under their lips a white word is waiting / Hanging from a cliff like the sky . . .” 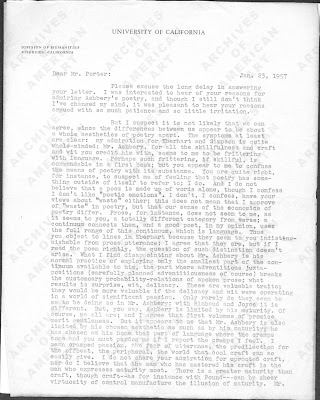 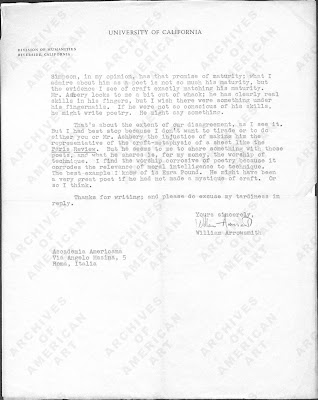