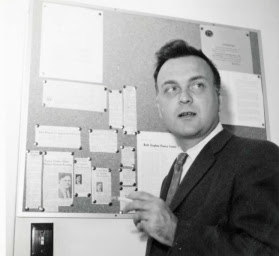 Jack Spicer, out of a 1958 letter to Robin Blaser (quoted in Lisa Jarnot’s biography Robert Duncan: The Ambassador from Venus):

The trick naturally is what Duncan learned years ago and tried to teach us—not to search for the perfect poem but to let your way of writing of the moment go along its own paths, explore and retreat but never be fully realized (confined) within the boundaries of one poem.

Continuing (made parcel of Spicer’s Admonitions): “This is where we were wrong and he was right, but he complicated things for us by saying that there is no such thing as good or bad poetry. There is—but not in relation to a single poem. There is really no single poem. . . . Poems should echo and reecho against each other. They should create resonances. They cannot live alone any more than we can.” And Duncan, out of the unpublished “Introduction to a Bibliography of the Works of Jack Spicer,” a work instigated in 1973 by Andreas Brown of the Gotham Book Mart, and pursued by Duncan for several months in 1974 “producing,” according to Jarnot, “pages of criticism and memoir as well as the poem ‘Over There’”:

I had led the way toward the serial poem that was to be the governing concept of Spicer’s and Blaser’s later work with Medieval Scenes in 1946, which I wrote, making like my parents, who in their Hermetic mysteries had received messages at their séance table, setting up now a table where I proposed in ten consecutive nights to receive ten consecutive visions that were also messages in Poetry.

(Is there an ongoing quarrel regarding the origin of seriality cached in “Over There”? “In one / imagination     there is a bond     secret to my understanding     that fate the structure of rime imitates commands.     Beyond my Medieval Scenes you went to distil from the sensual ripening the poison of an alcohol whose fumes have toucht poetry with rages and hallucinations I but refer to you ate. At the bile of Narcissus you croucht to rework his mirror as if to prove a window or renew the useable surface.” Is right acknowledgment for the initial reconnaissance of the serial work the source of the later Spicer / Duncan battles?)* Duncan in the “Introduction to a Bibliography. . .,” notes, too, the impermeability of the two’s research and study in that early period:

For the next two years, Spicer and I all but saw each other every day, days of intensive talk and study and writing toward what we thought of as a “Berkeley Renaissance.” We wanted a learned poetry, learned not in the terms of the literary world but in the lore of a magic tradition and of a spiritual experience we believed to be the key to the art. This was the period of Spicer’s elegies of a black Calvinism, the beginning of his life long contention with God, the Father, and of my orphic “Heavenly City, Earthly City” and of my “Medieval Scenes.”

And, in the 1980 Preface to Spicer’s One Night Stand & Other Poems, Duncan quotes parts of a piece Spicer wrote “in a symposium on “The Poet and Poetry” in Occident in 1949”:

The proudest boast made about Orpheus was not that his poems were beautiful in and of themselves. There were no New Critics then. The proudest boast was that he, the singer with the songs, moved impossible audiences—trees, wild animals, the king of hell himself.

And comments: “the Spicer of these early poems was at war with the doctrines of the New Critics that would see the poem as a thing in itself”—seeing in that refusal of the “thing in itself” (“the well wrought urn”) seriality broached. (Spicer, out of the same Occident statement: “The truth is that pure poetry bores everybody. It is a bore even to the poet. The only real contribution of the New Critics is that they have demonstrated this so well. They have taken poetry (already removed from its main source of human interest—the human voice) and have completed the job of denuding it of any remaining connection with person, place, and time. What is left is proudly exhibited in their essays—the dull horror of naked, pure poetry.” It’s that refusal of “the human voice” that makes the New Critics plausible kin (denied) to the Language poets.)

* Talking of the extent of the feud between Spicer and Duncan, Jarnot quotes an anecdote (dated 25 August 1997) by Spicer circle poet Harris Schiff, nineteen years old and attending the 1963 Vancouver Conference:

So, Jack [Spicer], for one reason or another—I think he thought it was quite a joke— . . . told me to stay with Creeley and have him take me around to go to the festival. And then he said, “I’d like you to look up Robert Duncan and ask him a question for me.” So I said, sure. . . . I was really a very innocent young man. I had no idea about poetry feuds. . . . There was a big . . . Saturday night party, and I told Creeley that Jack had asked me to deliver a message to Robert Duncan. . . . I’m pretty sure I had some drinks, and . . . I’m sure everyone else there was blasted. So Creeley introduced me to Duncan and said, “This is a young friend of Jack Spicer’s from San Francisco.” And I said hi, and I said “Jack asked me to ask you a question,” and he said, . . . “Oh yeah, what might that be?” And I said, “Well he wanted you to tell him if you could tell the difference between poetry and cable cars,” and Duncan said—I don’t remember his exact words, but what comes to me is “Why you little son of bitch, get the fuck out of my face. How can you come here and do that?” I had no idea what had just transpired. I never saw Robert Duncan again. And Jack wrote . . . to apologize for the poor manners of the poets in Vancouver.

Jarnot remarks: “Spicer, who had once said ‘Poetry is only for poets. Cable cars are for tourists,’ proved again that he could raise Duncan’s hackles, even for a distance.” Jarnot is likely referring to a letter Spicer wrote to Foot magazine (quoted in Ellingham and Killian’s Poet Be Like God), refusing to submit poems because one of its editors—Philip Whalen—was receiving ten dollars to read at the San Francisco State College Poetry Festival. That editor, Spicer writes:

. . . is as aware as I am or you are that 1) SF State College would like to turn all poets into cable cars. 2) A poet is not a cable car. 3) If a poet is gradually becoming a cable car he is gradually ceasing to be a poet. 4) He is telling others, who are too young to know better, that there is no difference between cable cars and poetry. 5) Poetry in a funny and metaphysical sense of the word is a Union and making it or yourself (which happens first) into a cable car is scabbing on the Union which can’t be broken but sure as hell can be scabbed upon . . .

A slightly different version—“And Duncan really got really pissed off and just said, ‘Fuck you. Get out of here, you little creep.’ And Jack just thought it was a funny thing to do. Which it was, you know?”—of Schiff’s story (“interviewed by Kevin Killian, May 6, 1991”) is found in Poet Be Like God.
Another report (see Jarnot’s Robert Duncan) of “the fireworks between Duncan and Spicer” is George Stanley’s (18 February 2006):

It was a grand feud—a transcendent feud—ultimate issues were at stake. It was conducted at a distance . . . —Duncan never came to Gino and Carlo’s, where the Spicer circle met, and I think Jack was persona non grata at 20th Street—not that he would have wanted to attend anyway—so the ripostes were carried back and forth by the young—like me. I recall something like this: someone told Jack that Robert had recently written a great poem. Jack said, sarcastically, “How many Egyptian gods are there in it?” That set the tone. But the great exchange was this. Jack accused Robert of having “broken the vow he had made to poetry”—this refers back to Berkeley in the 40s, I guess. I remember Robert’s reply exactly: “I never made any vow to poetry except to cut its throat, if i could make somebody laugh.”

Duncan’s reply ending up in “Pub Night,” a Stanley poem recording what sounds precisely as if it comes out of North Beach Spicer circle doings:

This i record
that listening to you talk, my mind half on you
& half on the variousness of what you were saying
it struck me
that love is true, not just real, not just a
sentiment.

I was afraid i might forget this, so i grabbed
a cigarette pack that was lying on the table,
tore off the top, & wrote:
“Truth has a double
value: obverse / reverse”

(A couple of days later i find it
in my pocket
& i tape it in my writing book, under this
quotation from Duncan:
“I never made any vow to poetry
except to cut its throat, if i could
make somebody laugh.”

Putting the two—Spicer and Duncan—next one another, a just referendum. Stanley, toward the end of the poem:

& by “obverse / reverse” i mean
one Truth, i hope, not two,
not a scattered, shattered love
falling through endless darkness
but a mystery, plain & simple . . .