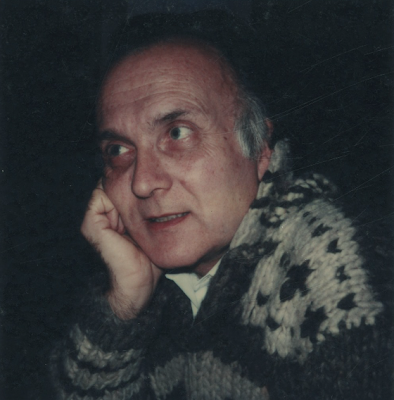 Speech indomitably poised at the fons et origo of poetry. Stories of working with “the materials of poetry”—“vowel sounds . . . consonant clusters . . . syllables.” “We will be detectives not judges . . . Elements of movement, what is often calld ‘metrics.’ The syllable, the word the phrase, the line, the paragraph, and the sentence.” Sense of a glottal workout, a tangibility of voice. How odd, in retrospect, that there’d be any commerce between Duncan and the dumb (“naturally incapable of speech”) cerebral upstarts of the “I HATE SPEECH” juggernaut. Upshot of the difference: Duncan’s interrupting Barrett Watten’s 1978 (apparently somewhat “labored”**) talk about Zukofsky at the San Francisco Art Institute. One measure of the difference between the two poetics: Watten’s baffled (or obtuse) comment (drawing Duncan’s anger) in talking about Zukofsky’s statement concerning “A”—“In a sense the poem is an autobiography: the words are my life”—: “This was an incredibly difficult thing for me to understand—how are the words your life? Your words are one thing. Your life is another.” As if one’s own particular lingo were but a shabbily constructed backlot movie set, erected and struck at will at the director’s behest . . . or refusal.

Intrigued by Frank O’Hara’s “In Memory of My Feelings,” published in the autumn 1958 issue of the Evergreen Review, Duncan wrote to the New York poet suggesting that he and O’Hara might share some common ground. Irritated with Duncan’s affected tone, O’Hara returned the letter via Donald Allen without a response. Duncan’s miscommunications with the writers of the New York school—tempered by a friendship with John Ashbery—were never to be resolved. O’Hara expressed his view of Duncan to Jasper Johns in 1959: “Among those poets of the West Coast Robert Duncan seems to have the esthetic position that Kenneth Rexroth occupies in the press and there are several books of his poetry around which might be interesting to go into—I can’t stand him myself, but he is their Charles Olson—to me his is quite flabby by comparison, but maybe because I’m on the East Coast.”

Dated 15 July 1959. Recall O’Hara’s deft assessment of Olson in the interview with Edward Lucie-Smith (Standing Still and Walking in New York). Replying to a query about the “usual dichotomy . . . between the raw and the cooked or between the academic and the Black Mountain, or between Lowell and Olson,” O’Hara refuses both***:

Actually I don’t really see what my relation is to them one way or the other except that we all live in the same time. I think that Olson is—a great spirit. I don’t think he is willing to be as delicate as his sensibility may be emotionally and he’s extremely conscious of the Pound heritage and of saying the important utterance, which one cannot always summon up and indeed is not particularly desirable most of the time.

I love the casually perfect weightedness of that “great spirit”—“spirit” summoning up Olson’s insistently breath-determined poetic (“And the line comes (I swear it) from the breath, from the breathing of the man who writes, at the moment that he writes, and thus is, it is here that, the daily work, the WORK, gets in, for only he, the man who writes, can declare, at every moment, the line its metric and its ending—where its breathing, shall come to, termination”) with a slight vengeance (almost as if O’Hara might’ve rather sassily said “a great blowhard”).

* Louis Zukofsky, similarly, out of the 1946 “Poetry / For My Son When He Can Read” (Prepositions), after quoting Gower’s “Be attent, / And time that is so briefly spent / With your fine fancies quaintly eche: / What’s dumb in show I’ll plain with speech”:

How much what is sounded by words has to do with what is seen by them—and how much what is at once sounded and seen by them crosscuts an interplay among themselves—will naturally sustain the scientific definition of poetry we are looking for. . . .
Moreover: granted that ‘the business of every science is not to prove but to explain its subject, in order that men may know what it is with which the science is concerned’; and that the ‘common speech’ is that to which ‘children are accustomed by those who are about them when they first begin to distinguish words’; and that, therefore, grammar which springs from this is but a ‘secondary speech’;—those like us, son, ‘to whom the world is our native country’ (as it was to Dante and Shakespeare) will declare (in substance with Gower’s lines in Pericles that have been quoted here) with Dante writing of the common speech, that ‘the exercise of discernment as to words involves by no means the smallest labor of our reason.’ ‘Since we see that a great many sorts of them can be found,’ and that (anti-climactically) what he said ‘on the pre-eminent nature of the words to be used may suffice for everyone of inborn discernment.’ For starting, simply, with Dante’s intent to explain and make plain—with ‘combed-out’ and ‘shaggy’ words, or as when breathing the new life he warned against metaphor whose discernment is lost in the making—it appears that the scientific definition of poetry can be based on nothing less than the world, the entire humanly known world.

** Hard to know. In spite of there being two recordings of the event in public archives, Watten, Jarnot notes, refused permission for any quoting of the talk. The Watten lines included are derived from a 1984 Poetry Flash piece by David Levi Strauss, “On Duncan & Zukofsky on Film: Traces Now and Then.”

*** O’Hara, out of the same Lucie-Smith interview:

I would rather be the sort of poet who would do, you know, the great thing of, you know the story about Max Jacob leaning out his window when Picasso is passing by the Bateau-Lavoir and Picasso calls up and says “Max, come out.” And he says “I won’t.” He says, “Why won’t you?” And he says, “Because I’m in search of a style.” And Picasso walks down the hill and, as Max Jacob pulls his head back, says, “There is no style.” That is the sort of thing that is, you know, like living and interesting.