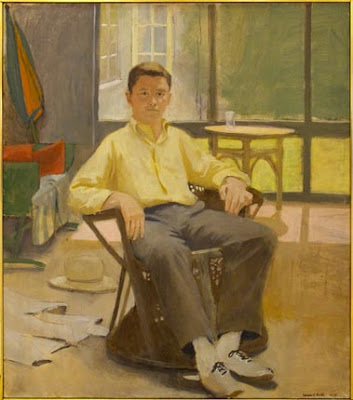 End of the week energy sap and paucity of means. No wonder some of the formerly robust joints hereabouts end by endlessly putting up old movies on their drab marquees, or ransacking the death notices willy-nilly. (Why do I recall, Ann Arbor Blues and Jazz Festival c. 1973, the emcee’s ire at the presumably honor-inflected applause garnered by a string of announcements of musicians lately deceased: “Don’t clap for them after they’re dead. Support them while they’re living!”) The daily collop and caterwaul never gets any easier: hauling up some mean fleshy particulars out of the brain bucket with the brain bucket. (I think of a line out of Thoreau’s A Week on the Concord and Merrimack Rivers that James Schuyler epigraph’d “The Home Book” with: “It seemed insensibly to grow lighter as the night shut in, and a distant and solitary farm-house was revealed, which before lurked in the shadows of the noon.”)

I keep rereading, out of The Home Book (1977), some prose poems unfound in Schuyler’s Collected Poems. One, called “Father or Son,” is included, lineated, in Schuyler’s Other Flowers: Uncollected Poems (2010) under the title “Love’s Photograph (or Father and Son).” Here’s one, initially riffing off King Richard’s riffing lines in Shakespeare’s Richard II (“Down, down I come like glistering Phaethon* / Wanting the manage of unruly jades / In the base court—base court, where kings grow base / To come at traitors’ calls and do them grace. / In the base court. Come down—down court, down King, / For night-owls shriek where mounting larks should sing . . .”):

Down, like glistering Phaeton reaching our town the day the cops initiated no-knock. You are yourself, you are of land of unreaped corn, unpicked prunes, cherries, farm fruit. The wish you wished a kindergarten day ago (stained cut out paper tulips, in paper pots, loving your face) came true sophisticated abed morning, whose Negro friends, fraternizes with Jews, artists. One way to see what you ate is to vomit. Regret, depression, fear, the Moerae girls, harmonize, you cannot not live. The telegram you called back Western Union to cancel: I forgive you; or was it on Easter eggs (green the green crack on vegetable-dyed greenish white)? Drunkard, paper claws up the floor; burn it up. Fierce relaxations. Afraid. Of—poverty? Lovers wait your letters, your kisses, posthumous works wait other lovers. Password: loathing for what was envied for.

Schuyler’s “down” wonderfully ambiguous, syntactically adept. Both a noun, something in the air (fluff off a cottonwood tree, aimless plumage), something come of the “land of unreaped corn” (sheer gone potential of every childhood seeping in to fire regret). And a clipped adjectival descriptor, self-addressed, a pep-talk inaugural “down” meaning “you are down”—though indubitably “yourself” (see wry joke made about the cops’ new no-knock policy congruent to such an ordinary malaise). Density and repetition (“green the green crack on vegetable-dyed greenish white”): sense of an indefatigable and abrupt will to precision. (Not unlike “Fierce relaxations.”) Eliding whose effect is not speed (“came true sophisticated abed morning, whose Negro friends, fraternizes with Jews, artists”) and adjectival pile-ups (“stained cut out paper tulips”). (Schuyler’s “Father or Son” begins: “Detected little things: a peach pit basket watch chain charm, an ivory cross wound with ivory ivy . . .” and, too, pictures a boy “ever on ice skates on ice-skate-scratched ice, an enlarged scratched snapshot”—the subtle poise of the stacked-up details a measure of the intensity of Schuyler’s attending (and of the demands of our own).) Is it the final “key” phrase (“Password: loathing for what was envied for”) that points back to O’Hara’s poem of exhaustion and regret? (And whose tone, like Schuyler’s here, is somewhat ambiguous.) I am thinking of “A Young Poet” with its ending—

Where is the castle he should inhabit on a promontory
while
his elegies are dictated to him by the divine prosecutor?
It is
a bank on 14th Street.
While we are seeing The Curse of Frankenstein he
sits in
the 42nd Street Library, reading about the Sumerians.
The threats
of inferiors are frightening
if you are are a Negro choosing your own High School,
or a painter too drunk
to fight off a mugging,
or a poet exhausted by
the insight which comes as a kiss
and follows as a curse.

(Schuyler’s “the day the cops initiated no-knock” akin to O’Hara’s “police who follow him, as he should be followed, but not by them . . .”)

Another (or two) of the Schuyler Home Book prose poems, sans commentaire:

I
Gladioli slant in the border as though stuck not growing there and around the square white wood beehive the bees drone like the layers of a bulb at the center of which is a viscous shoot. Small green apples hang from the small trees and under the skinny boughs ducks a skinny boy in wool swim trunks steering a lawn mower. Damp blades of chopped off grass and clover leaves stick to his shins. The mower ceases, the bees whirl their routes higher and he drinks from the nozzle of a hose. The gravel spurts under the wheels of a car, which, coming from between the lilac hedges, discloses itself as a laundry truck.

II
Out of the gray bay gray rocks, close spaced and each a little black green north tree forest. This became denser until it was the color of a hole. The trawler anchored and they scrambled ashore in an inlet closed by a little white sand beach like a Negro’s very white palm, the guide experienced and dignified last in laced boots with moccasin bottoms. The clarity of the water relicted a dead tree while he boiled great lake trout in a galvanized bucket on a resinous fire. A green flame. Everyone planned to change his “way of life” until he tasted the fish, which was tasteless. Scales on the dull sand like garbage, or rain. It began raining, a drop at a time, big as cod liver oil capsules. The two boys’ knees lichened and their shrills faded high and out into the falls of shot grouse curving into a November wet matchstick field. Burrs, unfinished houses.


* Phaethon—meaning “shining” in Greek—being the mythical son of Apollo, the sun-god, he who borrowed Apollo’s sun-chariot and—inexpert, brash, and weak—nearly slammed it into the earth, prevented only by Zeus’s killing thunderbolt. 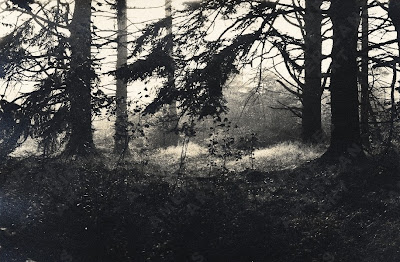 James Schuyler, “Woods”
(So designated, and found among the Fairfield Porter papers, Archives of American Art, Smithsonian Institution. Dated “between 1950 and 1991.”)