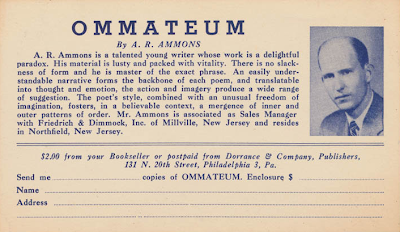 Gusts of the obligatory. Kept by the body’s demands, its hoof-flail and bucking, its fevers and spittles, the self ties itself to its pommel, and rides what’s uncontainable out. Hither and thither skittering, random access, the largesse of simple mayhem, matutinal dismay. Taut focus whilst, Sunday, the blow begins. Thus the weekend. The paraphrase is the poem. There’s that terrific thing A. R. Ammons quotes to Denise Levertov in a letter (2 September 1963) found in the new Chicago Review 57:1/2, Hugh Kenner talking about Yvor Winters’s “Fallacy of Expressive or Imitative Form”*:

Re Winters, I think he’s simply rationalizing his distress at non-reusable forms. His mind runs toward packaging, and a “form,” to his way of thinking, comes from Container Corp. All ad hoc formalities are Imitative and therefore Fallacious. Look up Williams’ poem about the cat stepping among the jamjars; and note that it contains, exactly, a single declarative sentence, which printed as prose would serve as its paraphrase; but that the poem, despite the fact that it contains the same words in the same order as its paraphrase is not identical with its paraphrase; and the difference between the two is what I call the poem’s form. Nothing to do with stanza pattern or lineation, though these serve as indications that one doesn’t look at the sentence but at the poem. Difference rather of direction. The sentence records information; the poem on the contrary enacts, i.e. gets from its own beginning to its own ending with the same gingerly efficiency as that cat dislodging nothing. . . .

Lovely. (In The Pound Era (1971), Kenner says of the poem: “It is one sinuous suspended sentence, feeling its way and never fumbling. Its gestures raise anticipatory tensions, its economy dislodges nothing.”) Pertinent, too, is Ammons’s “canto”—later called “Identity”—that he quotes and writes of (5 September 1962) to Levertov (who’s beginning to accumulate and arrange lines for the 1965 essay “Some Notes on Organic Form”—“I see craftsmanship not as an ability to plan campaigns but as being able to jump the right way in all the unguessable emergencies of writing”). Ammons, of “Identity”:

One of the submerged metaphors in the poem applies to writing poet, though the poem is really about any form of knowledge, experience, or existence. Texture, though, fits nicely in the texture of the web: the problem of pre-setting order is mentioned, and whether order shouldn’t be realized from the surroundings, the freest medium accepting the firmest order. . . .

an order of instinct prevails
through all accidents of circumstance,


though possibility is
high along the peripheries of
spider
webs:
you can go all
around the fringing attachments

2)   the possible settings
of a web are infinite:


if the web were perfectly pre-set,
the spider could
never find
a perfect place to set it in: and

if the web were
perfectly adaptable,
if freedom and possibility were without limit,
the web would
lose its special identity:


and that
order
diminishes toward the
periphery
allowing at the points of contact
entropy equal to entropy:

I think the web here is the constellation you mention. I call it a “field” as Olson, I think, does—using the scientific meaning of classical vs quantum fields. Fields of order occur out of random: it’s the freedom to occur from disorder that makes possible new fields, new things in new fields. If we imposed upon random a classical field then we would violate to some extent the actual, total operation of the field. This is an old, old problem, and it applies to so many areas, and is actually the central problem of my cantos. . . .

(Ammons redacts a lyrical midriff’s—between “the possible settings / of a web are infinite” and “if the web were perfectly pre-set”—including the somewhat mystical tag “I will show you / the underlying that takes no image to itself, / cannot be shown or said, / but weaves in and out of moons and bladderweeds, / is all and / beyond destruction / because created fully in no / particular form . . .”) Nearly all of Ammons’s recurrent motifs there in “Identity” in nuce: center : periphery, one : many, the uneasy arc of the salient unraveling.**


* Winters, in “Poetic Convention” (Primitivism and Decadence, 1937) put it thus:

To say that a poet is justified in employing a disintegrating form in order to express a feeling of disintegration, is merely a sophistical justification for bad poetry, akin to the Whitmanian notion that one must write loose and sprawling poetry to “express” the loose and sprawling American continent. In fact, all feeling, if one gives oneself (that is, one’s form) up to it, is a way of disintegration; poetic form is by definition a means to arrest the disintegration and order the feeling; and in so far as any poetry tends toward the formless, it fails to be expressive of anything.

A sort of “contained wholes” “shored against my ruins” approach. Writing to R. P. Blackmur (27 September 1933), Winters called “the fallacy of expressive form”:

. . . the notion that the form should express the quality of the material, that the rhythm should follow the mood, or what-not. This boils down to the Whitmanian trick of writing loose poetry about a loose country, or the Joycian trick of going crazy to express madness. One writes well, not in so far as one acquiesces in one’s matter (which is by nature formless) but in so far as one resists and reforms it.

** Even in Ammons’s 1960 review of Robert Duncan’s City Lights Selected Poems (in Poetry)—topic, partly, of the initial Levertov / Ammons exchange (Ammons: “I had no background material on Duncan . . . I couldn’t feel much lovingkindness, innocence or sense of wonder in the man behind the work—and I like to see that, reserving the fact, of course, that an innocent man who can’t write poetry doesn’t help poetry either. . .”), the preponderant concerns are much the same:

Mr. Duncan has taken up the central order-disorder position from which he can regard all being, if he likes, or only selected, representative parts of being. His poems are illustrations, objectifications of the interchange between order and disorder, accompanied by the appropriate emotions, which are more nearly suggested than realized, of amazement and love at the sight of perfect order, awe and fear at the possibilities of new forms (sometimes monstrous) arising from disorder, and grief at the processes of decay, disintegration, and return. Art—specifically, poetry—is a part of this large concern, and references to poetry or to the poet occur in nearly every poem. Duncan’s relationship to poetry, to the creation of form, becomes the symbol of order and change operating in all aspects of reality.
What that relationship is can best be suggested by thinking of Mr. Duncan as a ballet teacher. He stands at the bar, before a wall-size mirror, assumes a stance, and explains both his image and the emotions that should be evoked: “Note the configuration of that hand. That means disdain. Now, this thigh-line, on stage, will suggest emotional agility.” Etc. The imaginative students probably get through the machinery of the emotion occasionally to the actual, on-stage emotion. But Mr. Duncan never goes on stage. He analyzes and reports the materials of the experience as well as the reactions to the materials. 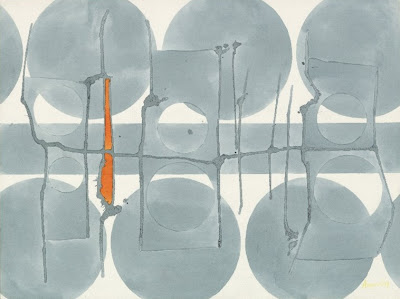