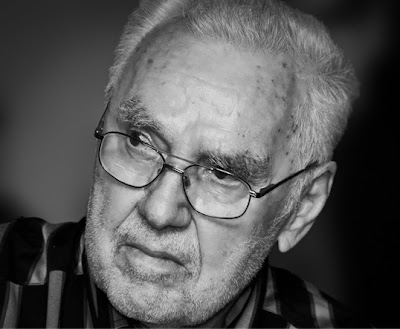 A diffusing cold, proprietary and vague. Wheedling off with the rubble of any attempt at a heaping up. Recall Marianne Moore’s remark: “You recall Ezra Pound’s remark? ‘The great writer is always the plodder; it’s the ephemeral writer that has to get on with the job.’” A nowhere remark, unlocatable except in Moore’s own Predilections. Kin, one thinks, to Moore’s insisting that “gusto thrives on freedom.” Only to be pinched a little: “Humility is an indispensable ally, enabling concentration to heighten gusto.” So ungodly and judicial, fervent and wry, under the furrowed brows of the clouds we go . . . a hindrance to naught but ourselves. Fools to be dogging the hustings so.

Walking the dog in the pre-dawn, a sprawl of ash-colored ribs, rows of clouds racked up against the sky. Half of a moon piercing out like a thorn. (Dr. Johnson, under “lantern,” moues inexpertly: “it is by mistake often written lanthorn.”) A morning of indifference and whim. “Nothing in that drawer.” (That deepening sense, too, of the inutile: “They need not my Commendations, unless I would, according to the Proverb, Shew the Sun with a Lanthorn.”)

Read a little of Robert Kroetsch’s What the Crow Said (1978). Prairie fabulism, the brash indeterminacy of weather:

There arose such swarms of horseflies, in the unexpected calm, that whole herds of milk cows, kicking up their heels, went through barbed wire fences. Horses galloped in wide, echoing circles around the dry pastures. Pigs, with no sloughs to wallow in, rooted frantically in the dust. Dogs leapt from the ground, seeming to snap at the air itself. A few citizens of the Municipal District, unable themselves to cope with the flies, fastened makeshift tails to the backs of their trousers or skirts and learned in a matter of minutes to switch them back and forth. Women, especially, took to wearing over their eyes forelocks in the manner of horses. One elderly gentleman figured out how to twitch his ears and the muscles of his thighs. And yet, for all the precautions, the afternoon constituted a veritable bloodletting.

(Of the forelock: there’s both Milton’s “Hyacinthin Locks / Round from his parted forelock manly hung / Cluſtring” and Spenser’s “the ioyous time wil not be ſtaid / Vnleſſe she doe him by the forelock take.”)

Scribble and lurch. The blithe inadequacy of the word. The moment seized by its predecessor, or its following. Something of the mere bothersome itch to continue. Against the unfathomable morass of insouciance and despite, a noun. Recall Samuel Daniel’s remark: “Nor muſt we thinke, viewing the ſuperficiall figure of a region in a Mappe that wee know ſtraight the faſhion and place as it is. Or reading an Hiſtorye (which is but a Mappe of men) and dooth no otherwiſe acquaint vs with the true Subſtance of Circumſtances, than a ſuperficiall Carde dooth the Sea-man with a Coaſt neuer ſeene which alwayes prooues other to the eye than the imagination fore caſt it) that preſently wee know all the world, and can diſtinctly iudge of times, men and manners, iuſt as they were. When the beſt meaſure of man is to be taken by his owne foote, bearing euer the nearest proportion to himſelfe, and is neuer ſo farre different and vnequall in his powers, that he hath all in perfection at one time, and nothing at another.” There’s, too, that lovely phrase or two of Thoreau’s that Clark Coolidge quotes in “Arrangement”: “Perhaps I can never find so good a setting for my thoughts as I shall thus have taken them out of. The crystal never sparkles more brightly than in the cavern . . .” Thoreau needling a note he’d begun a day earlier (27 January 1852):

The poison sumac with its stems hanging down on every side is a very agreeable object now seen against the snow
I do not know but thoughts written down thus in a journal might be printed in the same form with greater advantage—than if the related ones were brought together into separate essays. They are now allied to life—& are seen by the reader not to be far fetched— It is more simple—less artful— I feel that in the other case I should have no proper frame for my sketches. Mere facts & names & dates communicate more than we suspect— Whether the flower looks better in the nosegay—than in the meadow where it grew—& we had to wet our feet to get it! Is the scholastic air any advantage?