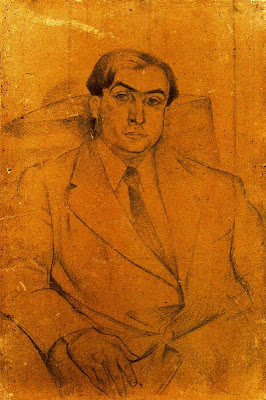 Ted Berrigan talking in 1973 with George Oppen about the source of a kind of resistance to Oppen’s works (“I never saw anything wrong with them, but somehow my attention wasn’t being gathered enough”)—out of Talking in Tranquility: Interviews with Ted Berrigan (1991):

TB:   You know, there’s another thing about your works with me; it’s that in the early sixties in New York, the young guys had Louis Zukofsky jammed down their throats. . . . And I reacted very strongly to that; and I was determined not to like any Zukofsky works unless I really liked them. And at that stage of the game, vast amounts of Zukofsky works were being unearthed and presented—for example, the Catullus, which I have to say that I do not like one bit, much as I thought it was a great idea, what he was doing with them; but I didn’t think they were funny enough . . . because, I mean, it’s a funny idea, and I figure if you’re going to use a funny idea, it should be funny!

(To which Oppen demurs: “Well, Louis does usually think things are funny in his own way.”)

Zukofsky’s Catullus (and a short history of translating “phonetically”) comes up in Berrigan’s 1972 Vort interview, too, in talk (with Barry Alpert) of Ron Padgett’s “Some Bombs” (Bean Spasms):

TB:   “Some Bombs” is all Ron’s, although I have a work called “The Secret Life of Ford Madox Ford” which is written exactly the same way Ron wrote “Some Bombs.”

TB:   He took six poems by Reverdy from a book called Some Poems, that’s where he got the title “Some Bombs.” And that gives an illustration of how he translated; he translated them phonetically. Ron’s French is pretty good whereas my French is quite low, not very good at all. So when I went through and did the same thing Ron did, my poems are slower and heavier than Ron’s. They have a lot more direct highly conscious meaning relating to the specific circumstances I was in—which is all obscured in the versions themselves but you can get the feeling, the feeling is very heavy. They were very negative poems; I was very angry.

TB:   Louis Zukofsky has done them exactly like that. I tried reading the ones he did of Catullus, but I thought they were sort of despicable. He got lost in a trap somewhere in between accuracy and in working the way he was working. All his high seriousness is in the middle between the two poles of accuracy and playing, and it seems to me that all the high seriousness should be in the playing. He should play as seriously as a little child does, and the accuracy should fall in very light and naturally. It seems to me that his poems are like gallstones or rocks in your kidneys.

BA:   There wasn’t any deliberate parody of him in your work?

TB:   We never heard of those. We did ours back around 1960, 1961, 1962 maybe. I’m not sure exactly when we did them, but I know that there was no deliberate take-off on Zukofsky. In fact at the time we had a great contempt for Zukofsky. It was impersonal. We had Frank O’Hara and a tradition on back through Apollinaire, and we thought that Zukofsky and all the people that were talking about Zukofsky were rock-heads. We were sort of enlightened later by Aram Saroyan and Clark Coolidge who all came out of Zukofsky in a certain way, and who had a lot to show us when they came out. We were the rock-heads in a way but we didn’t have much to take from Zukofsky. We were a little too flippant for that. No, I think the man is very respectable, a very respectable poet, but I think he’s dull and a sort of nit-picker in a way that Aram Saroyan isn’t, although everybody accuses him of being one. Maybe I’m too close to Zukofsky in one way, and a little young on the other hand to really get him. I get it out of Aram Saroyan and Bob Creeley.

Number one “bomb” (out of “Some Bombs”) by Ron Padgett, “after Reverdy”:

On intends
On Intends Creek
-cest a “whyso?” of the newt
The montage swallows a toot
Twos “suh” key oinks purrs the butt
Gene Autry sleeps

I’ll send the Lautréamont coat, “Do, Monday
Awnglish Dan’s a true key at the frond paws
One east tents with sin alley-oop
The sill is fond

One recalls, too late, Berrigan’s reproof of “if you’re going to use a funny idea, it should be funny!” The source of Padgett’s piece seems to be Pierre Reverdy’s “P. O. Midi”—out of Quelques poèmes (1916), collected, too, in the 1945 Gallimard Plupart du temps: 1915-1922. Some few of the “bombs” muster some laugh-credence put next to the French original (I like particularly “Gene Autry sleeps” for “Les autres dorment” and “a ‘whyso?’ of the newt” for “un oiseau de nuit”):

Oddly enough, Padgett’s stanza breaks, assuming he’s strictly adhering to Reverdy’s, mimic those in a 1967 Flammarion edition of Reverdy’s works—it called, too, Plupart du temps—wherein a page break occurs after “Les autres dorment” (in the Gallimard it occurs after “On descend l’autre côté du monde”). Is it conceivable that Padgett and Berrigan’s experiments in translating phonetically took place later that Berrigan’s “around 1960, 1961, 1962 maybe”? I doubt it. Bean Spasms is dated, too, 1967. And Alice Notley records that

On the manuscript of “The Secret Life of Ford Madox Ford” Ted scrawled “1963? or 4?” The first version of the sequence was published in two issues of Ted’s magazine, “C” (A Journal of Poetry), in 1964.

(Considering Berrigan’s animus toward Zukofsky, is “C” a slightly taunting mockery of Zukofsky’s “A”? I doubt it.)

Berrigan’s version of Reverdy’s “P. O. Midi” (being the second part of “The Secret Life of Ford Madox Ford”):

Impasses come, dear beasts
Who require these looney airs so long gone from you all
O all gone to one surly, rude, humiliated

Don’t hit it either
Saying what’s so damn sweet
I am on trains       they’re all choo-choos
Ack! The Vampire! Some debut!
Lower your dress dammit!

Eat a potato she said you sober All-American

A giddy indifference, ripping through the Reverdy for what’s there to be gleaned. Though with a slyly impeccable ear (and what Notley, pointing to the final line, calls “an occasional vicious literalness.”) I particularly like how “sur la roue du milieu” rather effortlessly becomes “surly, rude, humiliated”—a terribly “Berriganesque” adjectival pile-up akin to “feminine marvelous and tough.” And how, again, Reverdy’s seemingly innocuous line “Les autres dorment” triggers—through faulty pronunciation, providing two dorment with two syllables—the rather funny outburst “Lower your dress dammit!”
Posted by John Latta at 8:16 AM