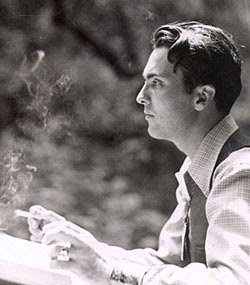 Continuing with Lisa Jarnot’s biography Robert Duncan: The Ambassador from Venus. A kind of doggedness, begun in the late ’sixties: Duncan’s life seemingly become a constant round of lectures and readings, and reported thus. Regarding Duncan’s rather bruited-about vow to forego doing another book for fifteen years after Bending the Bow (1968)—a refusal I recall’s being a kind of (possibly deemed narcissist) protest against the war in Vietnam—Jarnot quotes a 1971 document called “A Prospectus for the Prepublication Issue of Ground Work to Certain Friends of the Poet”:

(Recalling, under its ingenuous fretting about the demands of success, Bernadette Mayer’s rather more defiant “work yr ass off and don’t ever get famous.”)

Out of the 1968 Fulcrum Press Derivations: Selected Poems, 1950-1956—good biography serving to point the reader “back” (or “onwards”) into the corpus—a document that is printed, too, in the Robert J. Bertholf-edited A Selected Prose (1995), there made part of “Pages from a Notebook”:

1
Where giant wordlings interrupt the stuttering machine-gun wit; the pale insensible bland body phrases loom, as islands in the line of fire. Not targets, but meaningless casualties. Luminous blobs in a splattered nightscene; too accidental for inspiration, too clumsy for lyric.

3
My god, we thot after four minutes, how much more of this can there be? O a pure tedium. With and without ideas. A pure tedium.

4
The poet can barely lift these words. Not because they are heavy, but because he is so weak.

5
Unfolding phrases, like chairs closing into themselves. Furnitures walking, shifting sides over legs, backs. A gate closed in order to open. Irregular measures of meaning. The words, all cream and curds, all slick and sheen.
Drop and drop of acid. To permeate each custard area. A bitter cool smooth move ball bearing. A heavy wooden convertible structure.

6
A field of targets and archers. Bright black red and white concentric circles the bullseyes. Looking not watching. Sing sting sing slings of fortune. Birds fly far afield in far off sky. A shout arises. Almost. Haloo! Elegiac victories.
And all this refers to one’s extreme of youth. How extreme youth is.

7
Wide awake confusions.
Then drowsy illness. Ill, at ease.
Then—deep imageless sequence of words as blackout.
Confused, aroused;
two words startled like deep sleeping deer started up from deep thicket of words
aroused, confusion, like the breaking and smashing and trampling of a thicket of words. A weary after statement of wide awake confused aroused.

Stein-inflected, I suppose (induced sopor in the “weary after statement”). I admit it: Duncan often makes me exceedingly impatient, vitreously numb, “glazed.” The constant sense of agon, the mythic perturbatory, the excess and gush. Little or no humor. (See, for example, in a note written for a 17 March 1957 Jack Spicer reading at the Poetry Center, the complete failure to see Spicer’s humor:

Spicer disturbs. That he continues to do so is his vitality. The abortive, the solitary, the blasphemous, when they are not facetious, produce upheavals in the real. Life throws up the disturbing demand “All is not well”—sign after sign generated of accusation manifest—which it is the daring of Spicer . . . to mimic. If you do not allow that life vomits; that the cosmos with its swollen and shrunken stars, its irruptions, vomits—you can refuse to allow only by denying fact. And, in the fullness—the image of God must contain the grotesque.

A note that continues (only to voice belief in a kind of irremediable cosmic rut): “The Creator accuses as he blesses His creation. That God contains more, that God “contains” is an aesthetic that defines my critical departure from delight in Spicer’s work where the uncontaind, the isolate, appears and accuses the Creator. All partial voice screams out of very hell, divorced from the Good, truths that we can afford neither to deny nor to embrace.” Whew.) So that: reading Duncan’s earnest notes regarding “imaginary poetries” I can only turn (for relief) to something like the following—it, too, a set of “descriptions of imaginary poetries”—out of a late number (c. 1971) of the William Matthews and Russell Banks-edited Lillabulero:

I love you.
It’s difficult.
I fail.

You know what I mean.

Zowie! This Tristan Tzara
is fantastic! Like Ron
Padgett but older.

Suffering, how they were right about it
at the workshop.

Up the coast, down the coast.
Blood of the Snail, Brother
Snail,
moonlight on my roach clip.

It is like a mammoth hair
that has melted a whole rutabaga!
Opening the doors of ice,
there you are in the freezer.

10. Praise to the Lonely

The tongue inert, burnt
thong, detached
arm of a starfish . . . .
Death, song without
music, where have you been
all my life?

* Note: The above survey was transcriber from a cassette recording left in a basket on the doorstep of Lillabulero’s New Hampshire office.

A foundling. Apt. “To permeate the custard area.”
Posted by John Latta at 7:43 AM