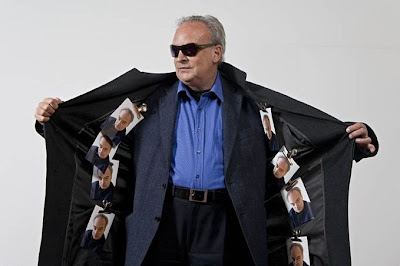 Nowadays, literature looks like a great urinal factory. This is what people smell of, more than anything! I’m always tempted to exclaim, like St. Polycarp did, ‘O my God! What century—or what world—have you made me born into!’ and to flee, covering my ears, as this holy man did whenever he found himself faced with an unseemly proposition. Anyway. The time will come when the whole world will have turned into a businessman and an imbecile (by then, thank God, I will be dead). Our nephews and nieces will have a worse time. Future generations will be tremendously stupid and rude.

Solace of roaring against the universal (inexplicit) connerie. Flaubert writes, too—to Colet, 3 November 1851—with all the audacious flippancy of a taunt, of how splendid it is “to be a great writer, to put men into the frying pan of your words and make them pop like chestnuts.” Continues:

There must be delirious pride in the feeling that you are bringing the full weight of your ideas to bear on mankind. But for that you must have something to say. Now, I will confess to you it seems to me I have nothing that everyone else doesn’t have, or that hasn’t been said equally well, or that can’t be said better.

Defiantly refusing, though, to “take on the passions of the crowd, in order to please it, and . . . descend to its level:

Rather sit by the fire and make Art for oneself, the way one plays ninepins. When all is said and done, Art is perhaps no more serious than a game of ninepins. Perhaps everything is an immense bluff.

Vila-Matas the canny skeptic, too, of that regime, its glorious diminished light:

To begin with, he’s clearly sensing that both God and the genius he always sought have died. To put it another way, without having given his consent, he sees himself now settled in a deplorable pigsty within a repugnant world.
They are all gone, as Henry Vaughan said. “They are all gone into the world of light,” is how the first line of that seventeenth-century English poem actually reads. But from the pigsty he’s holed up in now, worstward ho, that illuminated kingdom is not exactly visible . . . So Henry Vaughan’s line is reduced to a foul and miserable: “They are all gone.” End of story.

No one was further from suicide than Beckett. When he visited the grave of Heinrich von Kleist he felt a deep unease and scant admiration for this Romantic artist’s final suicidal gesture. Beckett, who loved the world of words and loved gambling, led a life where he wrote ever shorter, more minimal novels, works that were more and more stripped down and sparse. Always worstward. “Name, no, nothing is nameable, tell, no, nothing can be told, what then, I don’t know, I shouldn’t have begun.” A stubborn walk toward silence. “So leastward on. So long as dim still. Dim undimmed. Or dimmed to dimmer still. To dimmost dim. Leastmost in dimmost dim.”
He changed his language to impoverish his expression. And in the end his texts appeared more and more purged. The lucid delirium of poverty. Going through life forever hindered, precarious, inert, deformed, unsettled, numb, terrified, unwelcomed, naked, sickly, shaky, defenceless, exiled, inconsolable, playful. Beckett, skinny and smoking in his room in Tiers-Temps, a nursing home in Paris. His pockets full of cake for the pigeons. Retired, like any other elderly person with no family, to an old people’s home. Thinking of the Irish Sea. Waiting for the final darkness. “Much better, in the end, if sorrow disappears and silence returns. In the end, it’s how you’ve always been. Alone.”

(Audacity of “inconsolable” juddering up next to “playful.”) Vila-Matas writing of Sergio Chejfec’s My Two Worlds (Open Letter, 2011):

I begin as I’ll end: adrift. And I begin by wondering if novels have no choice but to narrate a story. The answer couldn’t be simpler: whether they intend to or not, they always tell a story. Because there’s not a single intelligent reader who, given something unique to read, even the most hermetic of novels, would fail to read a story into that impenetrable text. Now then, what happens if the reader is intelligent but the novelist isn’t? I remember Georges Simenon saying that it’s absolutely unnecessary for a novelist to be intelligent, quite the opposite: the less intelligent he is, the more possibilities open up to him as a novelist. He was unquestionably right, for I’ve dealt with great novelists throughout my life and none have seemed very intelligent to me.

Vila- Matas thence proceeding to except the Argentine Chejfec by a dodge (“Chejfec is someone intelligent for whom the word novelist is a poor fit”): rather precisely like Vila-Matas himself. Proceeding by means of the incidental, the divergent, the uncertain, the seemingly useless, the wayward and stray. Sentence-ry of unhesitant push, glacially up-gathering le tout, animally moving things here to there, to re-deposit. One recalls Flaubert (to Louise Colet, 15 July 1853):

The human consciousness has broadened since Homer. Sancho Panza’s belly has burst the seams of Venus’s girdle. Rather than persist in emulating old styles, we must exert ourselves to invent new ones. . . . Life! Life! To have erections! That is everything, the only thing that counts! That is why I so love lyricism. It seems to me the most natural form of poetry—poetry in all its nakedness and freedom. All the power of a work of art lies in this mystery, and it is this primordial quality, this motus animi continuus (vibration, continual movement of the mind—Cicero’s definition of eloquence), which results in conciseness, relief, form, energy, rhythm, diversity . . .