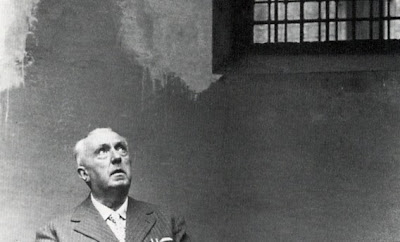 Lazy couple of days. Reading Carlo Emilio Gadda’s That Awful Mess on Via Merulana (1957), what the Italians call Il pasticciaccio. Lovely careening prose done into “supple and all-containing” English by William Weaver. The grumpy integrity of homicide detective Francesco Ingravallo (“Of medium height, rather rotund as to physique, or perhaps a bit squat, with black hair, thick and curly, which sprang forth from his forehead at the halfway point, as if to shelter his two metaphysical knobs from the fine Italian sun, he had a somnolent look, a heavy, lumbering walk, a slightly dull manner, like a person fighting a laborious digestion; dressed as well as his slender government salary allowed him to dress, with one or two little stains of olive oil on his lapel, almost imperceptible however, like a souvenir of the hills of his Molise . . .”) Gadda:

He sustained, among other things, that unforeseen catastrophes are never the consequence or the effect, if you prefer, of a single motive, of a cause singular; but they are rather like a whirlpool, a cyclonic point of depression in the consciousness of the world, towards which a whole multitude of converging causes have contributed. He also used words like knot or tangle, or muddle, or gnommero, which in Roman dialect means skein. But the legal term, “the motive, the motives,” escaped his lips by preference, though as if against his will. The opinion that we must “reform within ourselves the meaning of the category of cause,” as handed down by the philosophers from Aristotle to Immanuel Kant, and replace cause with causes was for him a central, persistent opinion, almost a fixation . . .

Gadda’s ferocity (largely directed against Mussolini—known, too, as the Turd—and the rising Fascisti dupes and henchmen; the novel is set in 1927) combined with the wayward ineluctable prose recalls Edward Dahlberg, if only Dahlberg had had such a distinct and easily discerned mark to pitch himself against. The prose, too, recalling—in Weaver’s hand—Joyce. Here, Gadda’s contempt, in a book that rejoices in dialect, for the signally singular regimen a campaign by the Milanese engineer Luigi Vittorio Bertarelli, President of the Italian Touring Club, to erect standard Italian road signs throughout the country would produce, rejecting:

. . . the peremptory assertions: Dangerous curve! Railroad crossing! Bumpy road! or of their symbols, imported from Milan. The Milanese, Luigi Vittorio, had sown Italy with the rare seed of their warning, of their “road signs.” Their outstanding signalism, one fine day, made, of the old boot, a new signal. To warn the people, to inculcate in the velocipederasts respect for disciplined ways, and, at the same time, for their own necks: to teach one’s neighbor how to live in this world: erect iron stakes in all of Italy, hoist on to them road signs enameled, through public oblation, that desire made them water at the mouth: taking as pretexts the most innocuous, the most sleepy crossings, every curve, every fork, every bump, or, as they say, every dip. The technical memento of Bertarelli, of Vitori, of Luis, in those years: then, on reblanched walls at the entrance to every hamlet, the totalitario-politico signs of the Turd: (“it is the plow that makes the furrow, but it is the sword that defends it . . . in a pig’s ass”) . . .

Found: affiche dated c. 1700 called “A Full and True Account of a Terrible & Bloody Fight Between Tom. Brown, the Poet, and a Bookseller”:

On Tueſday laſt Tom Brown’s paſſive Valour being rais’d above its ordinary pitch by a large Doſs of Brandy, and meditating a dire and bloody Revenge againſt a Bookſellor that had ſpoke a few Words to his diſadvantage: In all haſt he runs to a Cane-ſhop for an Oakenplant, but for want of Two-pence to purchaſe that dead-doing Weapon, or ſo much Credit as to be truſted for it, for he was forced to leave it behind him. Non habit quo Reſtim emat ad Suſpendium. However this diſappointment of a Weapon was no abatement to his Fury. He immadiately marches to the Bookſeller’s Shop. Charges him with ſlandering and diſſhonouring a Perſon of his Quality, and Swagers about the Shop like a Bully in a Brandy-Cellar. The Bookſeller juſtifies himſelf; ſays, ’twas no Injury to call a Spade, a Spade, nor Tom. Brown a Rake-hell, that had Trickt him of Three Guineas, in palming a falſe Copy upon him for a true one. Theſe bitter Words put Brown, and the Bookſeller to Logger-heads helter-skelter. To Brown’s immortal praiſe be it ſpoken, he gave the firſt Blow, and ſtrated back with ſo much Celerity and Conduct, that the Bookſeller, who was immur’d behind the Counter, was not able to reach him a Rowland for his Oliver. Whilſt daring Tom. made uſe of this Stratagem, and fought at a diſtance, the Fate of War enclin’d to the Poet’s ſide; but at the beſt form’d Deſigns are liable to Accidents and Mutabilities, ſo the Bookſeller by ſurprize, catching hold on the Poet’s Sleeve with one hand, ſo Batter’d his Chops with the other, that quite turn’d the Scales, and ’twas Whether for a Groat which would have the Victory. A Gentleman in the Shop taking away the Poet’s Sword, gave the Bookſeller the advantage of leaping over the Counter; which amaz’d the Poet perceiving, he Scours off into the Back-ſhop, in hopes of a Reinforcement. The Enemy with all ſpeed purſues him, and renews the Engagement. Brown, like a Gib-Cat, fighting upon his back, and the Itch, or his Fears, rendring him unable to clinch his Fiſts, he faught open-handed, and claw’d and ſcratch’d the Bookſeller’s Face, till the Blood run down his Fingers, and forc’d our Poet to wink hard, or he had Sounded at the Fight thereof.
This, with the Loſs of a Old Cravat, was all the damage the Bookſeller ſuſtain’d in a bloody Rencounter, that laſted thirteen Minuits, and twenty Seconds. Tom. Brown, of the two, was the greater Sufferer; for wanting Eyes to ward off the Blows, the Bookſeller ſo unmercifully belabour’d the Poet’s Lockram Jaws, that put his Phiz quite out of Countenance, and his Face was ſo ſwell’d and begrim’d with a mixture of Blood, Sweat, Snot, and Tears, that wou’d have pierc’d a Heart of Stone, to ſee what a frightful Figure he troop’d off in.
This is inſerted in Vindication of Tom. Brown’s Honour, and to prove, tho’ he is not fond of Fighting without great Advantage, he can Claw and Scratch like a Tyger upon occaſion; tho’ ſome have been ſo bold to affirm, he does neither.

Marked with the usual permit: “Licenſed according to Order.” Hard to determine where fluid orthography cedes the field to indifferent type-setting. Note the “Lockram Jaws.” Lockram (Locram, locqueram, locerom, locorum, lockarum, &c. after the French Locronan, literally, “cell of St. Ronan,” the name of the village in Brittany where the fabric originated): “A linen fabric of various quality for wearing apparel and household use.” And (lockum, lockrum): “A pack of gibberish.” A Thomas Brown of the period wrote a “satyrical fable” called “The Weesils” (“But in the Lion’s Court was proſperous long, / An Awful Bard, and reverenc’d was his Song; / Of Stature tall, and of right Weeſil Size”), apparently an attack on one William Sherlock, who directly retorted—“on reading the famed piece of Banter (for I can’t call it a Poem)”—with “The Anti-Weesils.” Whose “charge allegorickal” puts me (directly) to “Staring like a weasel” (Leigh Hunt) . . .
Posted by John Latta at 6:46 AM