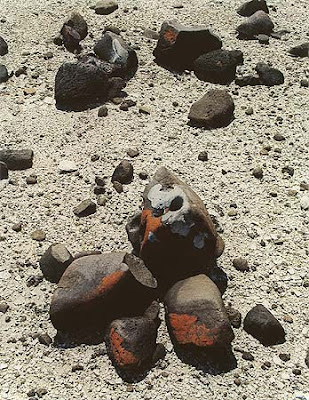 This person gathers mementoes with a perfect recklessness, now-a-days; mixes them all up together, and then serenely labels them without any regard to truth, propriety, or even plausibility. I have found him breaking a stone in two, and labeling half of it “Chunk busted from the pulpit of Demosthenes,” and the other half “Darnick from the Tomb of Abelard and Heloise.” I have known him to gather up a handful of pebbles by the roadside, and bring them on board ship and label them as coming from twenty celebrated localities five hundred miles apart. I remonstrate against these outrages upon reason and truth, of course, but it does no good.

—Mark Twain, out of The Innocents Abroad; Or, the New Pilgrims’ Progress (1869)

The scribes sank in wonderment.
This was not the hierarchical file to which
access had been deeded. It was something
far more wonderful: an opaque pebble in the grass.

As my worthy Friend Mr. Powallis of Penzance, was taking an Evening’s Walk in the Fields, he accidentally trod upon ſomething, which having all the Appearance of an human Excrement, made him immediately congratulate himſelf upon his good Luck. But upon a ſtricter Scrutiny it appeared to be a Pebble, which both in Shape and Colour perfectly reſembled what he at firſt took it for. He carried it Home to his Lady, who at firſt Sight cry’d out, my Dear, you have brought Home a                 mentioning a Word, which I am ſorry ſhou’d ever drop from a Woman of her Decency and Diſcretion. However, upon handling it ſhe was pacify’d, and diverted herſelf by now and then depoſiting it in the Parlour, to the Confuſion of the House-Maid, and ſometimes dropping it in Company, for the Entertainment and Aſtonishment of her Friends.
—Christopher Smart, out of “A Letter from Mrs. Mary Midnight, to the Society of
Antiquarians, giving them an Account of a very curious Petrifaction found
near Penzance, in the County of Cornwall” (The Midwife 1, 1751)

I aimed my Pebble—but Myself
Was all the one that fell—
Was it Goliah—was too large—
Or was myself—too small?

Demosthenes with his mouthful of pebbles had to talk without choking himself or allowing the pebbles to drop from his mouth. Verbal reverberations keep us safe, that is their interest. Emerson shows in the essay he titled “The Poet” how smallest things can serve for symbols, how every relation is picture-language. “Bare lists of words are found suggestive, to an imaginative and excited mind; as it is related of Lord Chatham, that he was accustomed to read in Bailey’s Dictionary, when he was preparing to speak in Parliament.”

It may be the future depends on an orator,
Some pebble-chewer practiced in Tyrian speech,
An apparition, twanging instruments
Within us hitherto unknown, he that
Confounds all opposites and spins a sphere
Created, like a bubble, of bright sheens,
With a tendency to bulge as it floats away . . .
—Wallace Stevens, out of “Owl’s Clover” (1936)

Patience is truly my device, as we wait
for the past to happen, which is to come into
the open. As I expect it to, daily & the ques-
tion is really what size we’re in, how much of
it is the measure, at one time. Patience is
the sum of my inertia, by which the base-line
lays itself out to the touch
like the flower in
heaven, each pebble
graded in ochre. How
to extend, anyway to decline the rhetoric
of occasion, by which the sequence back
from some end is clearly predictive. We
owe that in theory to the history of person
as an entire condition of landscape—that
kind of extension, for a start . . .

I took a pebble from my pocket and sucked it. It was smooth, from having been sucked so long, by me, and beaten by the storm. A little pebble in your mouth, round and smooth, appeases, soothes, makes you forget your hunger, forget your thirst.

—bum & zoom, leaving & yet never this awful old
this dark ocean life that hardly sees comes &
flashes on the sofa sits as Ms. Missa Brevis—
to go to try to find the rail between names.
I’ve tried painted black in a basic baggage dress
now ghost & jacket & engine now I’m surely going
fresh from qualifications to the canal and
the man in Texas I am a next
horse to be west of the pebbles almost as if
if again. I always get to change minutes.

. . . haunted in the streets of Saturday night in the American city with his eyes torn out like Oedipus who sees all and sees nothing from the agony of having lived and lived and lived and still not knowing how to conjure from the pitiful world and the folks around some word of praise for something that makes him grateful and makes him cry but remains invisible, aloof, delinquent, complacent, not unkind but just dumb, the street themselves, the things themselves of life and of American life, and the faces and hopes and attempts of the people themselves who with him in gnashing map of earth pronounce vowels and consonants around a nothing, they bite the air, there’s nothing to say because you can’t say what you know, it’s a void, a Demosthenes pebble would have to drop way long down to hit that kind of bottom.

CC wants to write his life. Any attempt to go by earlier models for how to do that would never be “my” life, which, as all might know, since it’s fact, is composition of thwarted desire with misdirected intention come right. So he puts pebbles in his mouth, thus to shape his utterance to figures having that in common with his life: not personal poesy à la I-take-the-hose-into-my-mouth-&-switch-on-the-ignition, this speaks through a medium & knows it. The medium has to be huge, as the person it gathers to contain, conceal present, prevent, explain.

But for compulsion of strong grace,
The pebble in the road
Would straight explode,
And fill the ghastly boundlessness of space.

—Coventry Patmore, out of “Legem Tuam Dilexi” (The Unknown Eros, 1877)

The water o’er the pebbles scarce could run
And broad old sexpools glittered in the sun.

A restless surface. Chewing, and spitting sand and
Small white pebbles, clam shells with a sheen or chalky white.
A horseshoe crab: primeval. And all this without thought, this
Churning energy. Energy! The sun sucks up the dew; the day is
Clear; a bird shits on my window ledge. Rain will wash it off
Or a storm will chip it loose. Life, I do not understand. The
Days tick by, each so unique, each so alike: what is that chatter
In the grass?

When the flageolets verts are finally cooked I shall be high on Mississippi rock water. The water flows over the rock leaving rich traces, unlike Alpine water that is so pure and sprightly like Fauntleroy Alpine deer, never touching rock or pebble. Pure. Yet feeble. Weak because the minerals are lacking. They only follow the tough arm of water that likes to mingle with the crowd and pick up its bitters in a dirty old smokey fist. Like Dickens.

—Barbara Guest, out of The Countess from Minneapolis (1976)


Line up all around the block, inscribe
dry red Kansas, country empty, even ‘Great American Desert’
no mapped puddle skipped a pebble, but Flood,
Flood parted ahead, let stack up time,
fast blood put out to pasture
our large argosy:

The result of the thoughts’ operating on the data given to sense is to transform the order in which experience comes into an entirely different order, that of the conceived world. There is no spot of light, for example, which I pick out and proceed to define as a pebble, which is not thereby torn from its mere time- and space-neighbors, and thought in conjunction with things physically parted from it by the width of nature.

—William James, out of The Principles of Psychology (1890)

It was a mountain creek, running over little pebbles of white quartz and mica. Let's say that every possibility waits. In raga time is added to measure, which expands. A deep thirst, faintly smelling of artichoke hearts, and resembling the sleepiness of childhood.

On the inscribed surface
of sleep.

Sweet nothing
to do with me.

As a certain bulk of Water was instituted at the Creation, so very likely a certain portion of intellect was spun forth into the thin Air for the Brains of Man to prey upon it. You will see my drift without any unnecessary parenthesis. That which is contained in the Pacific cannot lie in the hollow of the Caspian; that which was in Milton’s head could not find Room in Charles the second’s. He like a Moon attracted Intellect to its flow. It has not ebbed yet, but has left the shore pebble all bare . . .

Para thina poluphloisboio thalasses: the turn of the wave and the scutter of receding pebbles.
Years’ work to get that. Best I have been able to do is cross cut in Mauberley, led up to:

. . . imaginary
Audition of the phantasmal sea-surge

which is totally different, and a different movement of the water, and inferior.

“What is sillier than to talk about talking?” And so Demosthenes
took to putting small pebbles into his oratorical mouth,
took to marching up and down

the steep pebble-covered hills near Athens, talking pebble talk.
Perhaps he knew the fragility of words and was comforted in
spitting them, stone-like, into the silences.

It is as if all necessary eloquence could come only of rejection,
of a leaving behind . . .

Like the moisture or the polish on a pebble, genius neither distorts nor false-colours its objects; but on the contrary brings out many a vein and many a tint, which escape the eye of common observation, thus raising to the rank of gems what had been often kicked away by the hurrying foot of the traveller on the dusty high road of custom.

The CLOD & the PEBBLE

Love seeketh not Itself to please,
Nor for itself hath any care;
But for another gives its ease,
And builds a Heaven in Hells despair.

So sang a little Clod of Clay,
Trodden with the cattles feet:
But a Pebble of the brook,
Warbled out these metres meet.

Love seeketh only Self to please,
To bind another to Its delight,
Joys in anothers loss of ease,
And builds a Hell in Heavens despite.

The imagination, intoxicated by prohibitions, rises to drunken heights to destroy the world. Let it rage, let it kill. The imagination is supreme. To it all our works forever, from the remotest past to the farthest future, have been, and are and will be dedicated. To it alone we show our wit by having raised in its honor as monument not the least pebble. To it now we come to dedicate our secret project: the annihilation of every human creature on the face of the earth. This is something never before attempted. None to remain; nothing but the lower vertebrates, the mollusks, insects and plants. Then at last will the world be made anew.

—William Carlos Williams, out of Spring and All (1923)

How fearful
And dizzy ’tis, to cast one’s eyes so low!
The crows and choughs that wing the midway air
Show scarce so gross as beetles. Half way down
Hangs one that gathers sampire, dreadful trade!
Methinks he seems no bigger than his head.
The fishermen that walk upon the beach
Appear like mice, and yond tall anchoring bark,
Diminish’d to her cock; her cock a buoy
Almost too small for sight. The murmuring surge
That on th’ unnumb’red idle pebble chafes
Cannot be heard so high. I’l1 look no more,
Lest my brain turn and the deficient sight
Topple down headlong.