Lyn Hejinian’s My Life in the Nineties 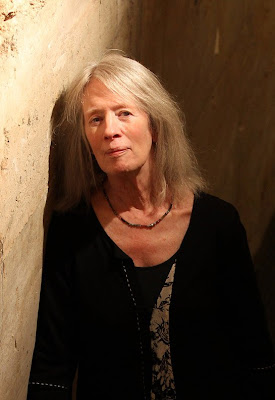 Re-read: Lyn Hejinian’s My Life in the Nineties (2003). Compared to My Life, a less wayward assemblage, less turbulent, less various, less flighty. Damped down by methodical surety (inquiry at a stasis—is that the effect of return to a presumably ongoing text?) Up out of what becomes a kind of habitual matter-of-fact (I long to invent a French idiom: la voix grise, a monotonous voice like a colloquy of pins stuck into a map, flagging a benign and routine series of maneuvers, push and retreat—), what ascends is the factoid quotable, fine-tuning into palpability its immediate surround:

“What we term a long poem is, in fact, merely a succession of brief ones,” Poe says. Little puffs of dust pop out from under the feet, emitting the odor of chamomile.

Come morning the wind in the sunlight is the color of spilling milk. But the hills are charred, houses lost, and the city stretches out, named for Bishop George Berkeley, in honor of his line, “Westward the course of empire takes its way.”

A hint of Hejinian’s own seeing of the general paucity of outcrop, the flat map, the exerted prose: “Today’s brightest spots are void, and indeed it seems as if I have to will all of all these days into memory, as if memory, which had a will of its own during childhood, was now reluctant to attend to the day, or as if the light accumulated by time was overpowering the details around us, the way sunlight blazing on a page obliterates the type.” (The metaphor itself blazing up to light up the dilemma, thus rescuing that page.) Is it the intellect tying down the body’s hatches? The sensual hamstrung by the cerebral? Hejinian:

Where as a child I used to be afraid of lockjaw with its resemblance to stubbornness, later I feared the madness that filled the gap between what I meant to say and what I did say as it widened.

Compare that to lines out of My Life under the rubric “The settling-in / that we’re / describing is a / preliminary to / being blown up”:

Sway is built into skyscrapers, since it is natural to trees. It is completely straightforward. On occasion I’ve transferred my restlessness, the sense of necessity, to the vehicle itself.

(Admittedly, as if predicting, the next sentence reads: “And if I feel like a book, a person on paper, I will continue.” Contre Mallarmé’s Le monde est fait pour aboutir à un beau livre—“Every person inevitably ends up a book.”) The extolled and diffuse “restlessness” of My Life is reduced to a single item in My Life in the Nineties—:

Perhaps one records one’s moods (“June 26: gloomy, irritable—as if grieving” or “July 5: excited, restless—distracted by potential happiness (but perhaps happiness and potentiality are the same thing?)”) not out of narcissism but in the hope that they may prove a register, indicative not only of the state of one’s psyche but also of the state of the world . . .

—a sentence undoubtedly betraying something of a narcissist bent (“state of one’s psyche” = “state of the world”?) in mid-denial. For all its seeming invariance and implacability (compared, that is, to the tense bounce of My Life, its “love to be astonished” credo and rip), some sentences in My Life in the Nineties do offer, in lieu of romp, writerly precept, the curt key: “Creating meaningfulness for the meanings this conveys is its meaningfulness.” Or: “We perceive nothing but relationships—perception itself is that.” Or (borrowed, quotable):

“Sentences must stir in a book like leaves in a forest,” said Flaubert, “each distinct from each despite their resemblance.”*

Followed by “Our borders provide us with a theater for exaggeration”—a sentence I read, in its context, to refer to the borders implicit in sentence-making itself—“each distinct from each”—and the uncontrollable comedies of sentence placement (“everyone is out of place in a comedy”).

To write, we should know everything. Scribblers that we are, we are monstrously ignorant, but what ideas and comparisons such knowing would provide! We generally lack any backbone. The books whereof whole literatures flow, like Homer, Rabelais, are encyclopedias of their epochs. They knew everything, those fellows, and we, we know nothing. In the poetics of Ronsard there’s a curious precept: that the poet be instructed in arts and crafts, blacksmithing, goldsmithing, locksmithing, &c. in order to draw up metaphors thereof. That’s what makes for a rich and various language. Sentences ought to stir in a book like the leaves in a forest, all dissimilar in their similarity.

Thus Bouvard et Pécuchet and Flaubert’s thousands of pages of preparatory notes. And, with it, nineteenth century certainty dashed. Hejinian (out of “Preface to Writing Is an Aid to Memory”):

I am pressed with questions as if posed and feverish with a peculiar greed. Incessant knowledge and the natural sciences of difﬁculty, brilliance, complexity, and generosity, to please an entire face, where sorrow by the fact is not of true greatness. Work is retarded by such desire, which is anticipation of its certainty, and hence a desire impossible of satisfaction, in the future despite the grand decision to pull it present. It is that interest as lapse of time, that wanting to put too much in, is forgetting, or the forgotten calling attention. The whole has been given away and looking out is a forgetting sent without to end all the commoner.

Or (out of My Life in the Nineties): “It is the task of art to preserve disappearance.”