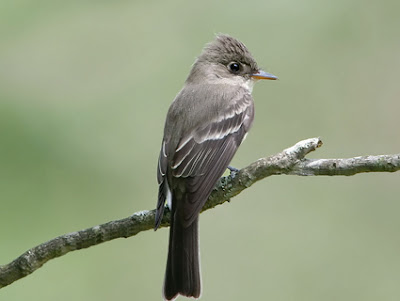 Finicking, impatient, opposed to listless. Dipping into book after book. Looking (unsuccessfully) for lines to anchor a flight. Or trigger a spell. A springboard. A palpably dumb way of proceeding. For two days examining a flycatcher—an Eastern Wood Pewee—out in the back, diving repeatedly out into its abrupt circuits off a slender upright stump. Today, though, absent. And, here: Beckett writing to Barney Rosset (11 February 1954):

. . . of trying again in English, but it’s only evading the issue like everything else I try. If there was a head and a rock I’d rather beat that against this than start the old fake stravaguing again in another proxy. It’s hard to go on with everything loathed and repudiated as soon as formulated, and in the act of formulation, and before formulation. [. . .] At the moment I have a “man” crawling along a corridor in the rock in the dark, but he’s due to vanish any day now. Of course there’s no reason why it would start now or ever for that matter. I’m horribly tired and stupefied, but not yet tired and stupefied enough. To write is impossible but not yet impossible enough. That’s how I cod myself these days.

Stravaig, to ramble. Related to extravage, to talk wildly, to ramble. (“To vaig is in common use, as well as stravaig.”) Proxy and cod. (See, too, codswallop.) Oddly, like the flycatcher’s dash and return: I repeat myself. Drawn again and again to some same words, a traceable circuitry of my digressing, my medium. No other way home. Susan Howe, out of “Echolalia in Mrs. Piper” (Chicago Review 56:4, 2012):

Birds in the mouth as merry as

any other wayling twig figment


‘Before’ has taken the place of

some rare word naked as nail—

“Echolalia represents the mind as the complete victim of suggestion or outside ideas. In the early development of her mediumship Mrs. Piper showed indications of this echolalia and its highly developed automatism as a consequence.”
—William James, “Notes on Echolalia in Mrs. Piper” (1886)

Putting the Joyce in context: “. . . all darnels occumule, sittang sambre on his sett, drammen and drommen, usking queasy quizzers of his ruful continence, his childlinen scarf to encourage his obsequies where he’d check their debths in that mormon’s thames, be questing and handsetl, hop, step and a deepend . . .” Where, even amidst the rollick, it (“debths”) loses some of its oomph, its way of maintaining (owing) origin (deep, mysterious) to end itself.

Sense of wry motility and ease of late. Tending toward the blasé recouped whatever. Inconspicuous scribbles in the margins. Refusing the push of statement, the quagmire of the singular noise. A notebook, a notebook! Whatever outs, outs. Early morning re-reading Hejinian’s My Life. Signs of Hejinian’s perennial restlessness (inquiry thwarted, inquiry “stalwart in its ceaselessness”). Her mark. “Perhaps initially, even before one can talk, restlessness is already conventional, establishing the incoherent border with will later separate events from experience.” (The way language—naming—pulls a thing momentarily up out of the phenomenal smear: in My Life language, its “recall,” is itself opposed to time: “Pure duration, a compound plenum in which nothing is repeated.”) And: “Restlessness is a form of doubt as well as a form of curiosity.” Hejinian’s restlessness is “made inevitable by language” (“Preface to Writing Is an Aid to Memory”). Quotes (“The Rejection of Closure”) Mephistopheles in Goethe’s Faust: “As long as man keeps hearing words / He’s sure that there’s a meaning somewhere.” Attempts to explicate (“Comments for Manuel Brito”) an entirely restless line (“debth”-mired) out of Writing Is an Aid to Memory (Hejinian is making distinct collage and montage, claiming—“collage is a predominantly spatial technique (developed in paintings), whereas montage (deriving from ﬁlm technique) employs devices that are related to time . . . montage preserves its character as a process”):

I don’t quite know how to explicate the line “I am impatient to finish in order to begin . . .” with respect to my uneasiness with the inadequacies of collage, except perhaps to say that the line obviously expresses a certain mental state, impatience, or restlessness, an urge not to stand still, while at the same time it assumes that there’s no progressing continuum in which “I” can participate.

I can always wait sometimes, other times impatience overcomes
me like a disease effacing the ﬁngerprints of the naked hand
on my inner nature which chance bothered to put there,
beauty scratched out, and history answered in the afﬁrmative
There really is something to try over
To the air to draw sentence forms and to hang in suspense no
further than this no more than need be . . .

Whence the repeated phrase in My Life “As for we who ‘love to be astonished’”? There’s the line, plausibly impertinent, assigned to André Maurois: “In literature, as in love, we are astonished at what is chosen by others.”
Posted by John Latta at 6:34 AM