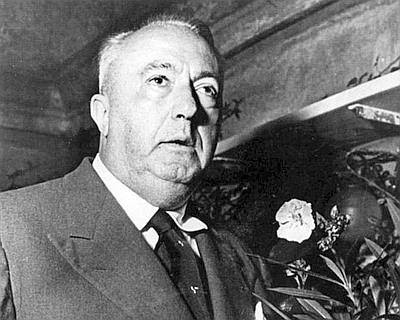 Out of Carlo Emilio Gadda’s That Awful Mess on Via Merulana (1957), two turds, each seemingly deposited in “reply” to arrival of carabinieri:

. . . there peered in, then hopped onto the chill tile floor, here and there, with certain cluck-clucks of hers, among two piles of sweaters, a surly and half-featherless hen, lacking one eye, with her right leg bound by a string, all knots and splices, which wouldn’t stop coming out, coming up: such, as from the ocean, the endless line of the sounding where the windlass of the poop summons it back aboard and yet a fringe of beard decks it out, from time to time: a mucid, green seaweed from the depths. After having hazarded, this way and that, more than one lifting of the foot, with the air, each time, of knowing quite well were she meant to go, but of being hindered by the contradictory prohibitions of fate, the pattering one-eyed fowl then changed her mind completely. She unstuck her wings from her body (and she seemed to expose the ribs for a more generous intake of air), while a badly restrained anger already gurgled in the gullet: a catarrhous commination. Her windpipe envenomed, she began a cadenza in falsetto: she pecked wildly at the top of that mountain of rags, whence she sprayed the phenomena of the universe with the supreme cockledoodledoo, as if she had laid an egg up there. But she fluttered down without any waste of time, landing on the tiles with renewed paroxysms of high notes, a glide of the most successful sort, a record: still dragging the string after her. Parallel to the string and its chain of knots and gnarls, a thread of gray wool had caught on one leg: and the thread this time seemed to be unwoven from a rhubarb-colored scarf, beneath the dyed rags. Once on the ground, and after yet another cluck-cluck expressing either a wrath beyond cure or restored peace and friendship, she planted herself on steady legs before the shoes of the horrified corporal, turning to him the highly unbersagliere-like plume* of her tail: she lifted the root of the same, revealed the Pope’s nose in all its beauty: diaphragmed to the minimum, the full extent of the aperture, the pink rose-window of her sphincter, and, plop, promptly took a shit: not out of contempt, no, probably indeed to honor, following hennish etiquette, the brave noncom, and with all the nonchalance in the world: a green chocolate drop twisted à la Borromini like the lumps of colloid sulfur in the Abule water: and on the very tip-top a little spit of calcium, also in the colloidal state, a very white cream, the pallor of pasteurized milk, which was already on the market in those days.

The old woman, decrepit though she was, must have understood at once that this unwanted olive drab-and-black visit . . . looked for all the world as if it were aiming at her house! so she sewed up, without parting them again, the two bloodless rims of her lips, the two curly hairs embellishing here and there the jawing of her chin, and left to them, to the Brothers Grim, the initiative of paying their respects, to the older and higher in rank of the two. In the meanwhile, without giving any outward sign nevertheless, she made an effort to swallow the event, this, of the three arrivals, which she most feared and abhorred in the torment of her viscera: by hastily recommending herself in prayer to Sant’Antonio di Padova loving miracle-worker for all of us, and also, however, in another plea to the good offices (automatic in her former days) of the plexus haemorroidalis medii. She arrived, in fact, at the deliberate constriction of the more celebrated rectal rings, extenuated though they were by advanced age: not entirely inoperative, though more and more crumbling with the years, were the so-called Houston valves, chiefly the super-valve of Kohlrausch, nor the semilunars of Morgagni. The desperate attempt to block the ampulla, whose constricted extreme ahi ahi ahi already the olive drab—black—silver trauma was affecting, in concomitance with the shrill whistle ahi ahi of the arriving engine, achieved nothing more that the release of a few drops, rather phobic, plonk, on the platform of Casal Bruciato: free on board, yes, F.O.B. Casal Bruciato, though some may say and, however, write C.I.F. (cost insurance free) and some P.L.O.P. The providential lack, under the crotch of the old woman, of that pair of tubular correctives of nakedness which our most exquisite reporters today habitually call “intimate garments,” allowed the event to fall out on to the pavement, unobserved by the Grims.

Gadda’s book tails off into uncertainty, without determining a culprit, odd for what is, in nuce, a murder mystery. Pertinent (maybe), Gadda’s lines at the end of a topically related scene wherein another of the “olive-drab” carabinieri, in bending to retrieve a piece of inutile evidence, “freed for public view his posterior rotundities, properly covered with cloth of the same color”:

The incredible fullness was about to burst—so it appeared—the median rear seam of the trousers: which seemed, instead, only to loosen, in the taut zigzag of a line of reluctant thread, of a blue-green color, darker than the green of the cloth. The seam being pressed beyond its capacity, the breaking point was not reached. A sharp shot re-echoed in the room instead. No: it wasn’t a revolver’s bullet. . . . The humble duty had expressed itself: that was all: certain postures favor certain nomenclatures, as if eliciting the sound from the very sources of the same.


* Note by translator William Weaver: “The soldiers of the bersaglieri (sharpshooters) regiments wear hats with special plumes of cock tail-feathers.”

** Weaver, in a Paris Review interview conducted by Willard Spiegelman (no talk of Gadda) adds a wholly different (theatrical) note to such a “stance.” Recalling Frank O’Hara in the early ’fifties:

He was a great opera lover, and he was a musician. We went to the opera quite a lot and to movies, of course, even more. At the City Center in those days, the opera, the ballet and the brief theater season were all inexpensive. During the ballet season we would go almost every night. Life became a performance when you were with Frank. Once we were walking home from the City Opera, along Fifty-seventh Street, where in those days there were antique shops, and a lot of the windows were set up as little drawing rooms and sitting rooms, and so on. We made up this game that they were our rooms, and we were inviting people in. Frank would say, Come in, Tab, and have a seat! And I would say, Sugar Ray, I’m so glad you could make it! And so we would invent little skits suited to the rooms we saw in the windows. We would play this game, changing with each window along Fifty-seventh Street. With Frank, you never knew when what you were doing and what you were talking about was going to become a kind of shared game and, really, a performance.

but when
staring into light
we think