Angel in the Forest 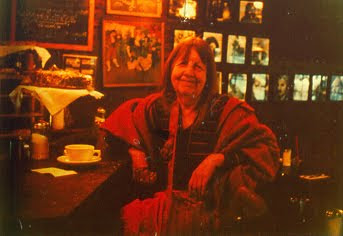 The ever-pertinent (and ever-neglected) Marguerite Young (out of the 1945 Angel in the Forest: A Fairy Tale of Two Utopias):

In a narrow defile between two mighty mountains, hemmed in by walls of everlasting ice and snow, a multitude of English soldiers, poor cotton weavers on a holiday, were slain by the long guns, English manufacture, of the Afghan raiders, safe on the clouded precipice above them. For the sake of carbuncles as big as Jews’ heads cut off at the nape, and for the sake of many other considerations, largely mundane, many Christian soldiers, with nothing but the bags upon their backs, were sent to certain death in India, and many horrors were perpetuated. There were wars throughout India and the Orient, in far-off mountain regions, jungles, deserts, at Jalalabad, Bokhara, Lahore, Rangoon, and all the places which, as names, evoked romance and deathless dreams in the England of that day. Oh, Xanadu of the soul, and caverns measureless to man! In retribution for the spoliation by nameless Moslems of the bodies of two otherwise nameless Presbyterians, Macnaghten and Burnes, the beautiful bazaar of Kabul, a city which had been dedicated to holy thought, a city of gleaming temples, clusters of bells, bearded patriarchs, and many doves of peace, was burned to the ground before evacuation by Her Majesty’s forces. Unfortunate but necessary to the march of progress. Throughout all of India thereafter, there were head-hunters, both Christian and non-Christian, acute mental sufferings, dysentery, destruction, festering sores, confusions as inevitable as the march of progress, according to some points of view.
Nor was India the only theater, Just as France conquered Algeria because its ruler flicked a fly-swatter in the face of the French consul, and as other wars for the expansion of empire have been fought on the pretext of other and less important matters, England fought a long, protracted war with China, and for no realistic reason, apparently. The Chinese “Sons of Heaven,” as they were called, refused, in 1839, to allow opium to be imported for Chinese consumption from India, where the British held a monopoly on languorous poppy fields and fäerie lands forlorn. Here was the English merchants’ opportunity—a poetic pretext for invasion. As a result of this war opium factories were opened at Hong Kong; China became a place of gossamer waftings, and the Chinese “Sons of Heaven” lost some of their old arrogance in their dealings with Windsor. “As children say the snow brings more snow, so did this war with China bring on others.” Throughout the entirety of Queen Victoria’s reign, there was always a war going on, though England grew stuffier and stuffier, more and more respectable, more and more serene—perhaps as a result of that great opiate, Matthew Arnold’s “sweetness and light,” and easy virtues in the drawing rooms at Windsor.
How different the world outside! The New Poor Law, passed in 1834, as it placed husband and wife, parents and children in separate pauper barracks, had virtually the effect of destroying the family, an institution so admired by Queen Victoria and the Victorians . . .

Turned to Young’s Angel in the Forest after reading “Miss Young, My Darling,” a chapter in Bruce Kellner’s Kiss Me Again: An Invitation to a Group of Noble Dames (Turtle Point Press, 2002). Kellner notes how he once received what Young herself called a “casually selected page” out of Miss MacIntosh, My Darling, the novel she was then writing. Kellner:

On the back of the envelope she wrote: “Brought by messenger pigeons across several seas.” It was a page of manuscript, numbered 910, but in reading Miss MacIntosh, My Darling more than once in later years, I never discovered it in print. That is no assurance it is not there, of course, buried in that dense forest of words that encourages enchantment and somnolence in just about equal measure.

“This casually selected page” recalls Stanley Spencer’s paintings, the holy redounding up out of the commonplace, everything in flux and flood:

. . . woman might be man, and sun might be moon, and dog might be owl, and turrets spoke with human voices, and men were sea-shells, and hands flew through clouded, opalescent heavens stretching endlessly like the memory of alien thought. Perhaps he had asked too much of life, too much of death, even though the very fact that he had made no demands, no unusual demands of any kind, that he had been passive and receptive, asking nothing, it seemed to him. He had been content to follow his usual routines which had been protective, setting his watch where there was no time. Or perhaps the haunted questions were the only answers as the autumn leaves fell, fell with long whirling and sighing, fell through him, fell where there was no one. Perhaps he fell, clutching at a rope of song sparrows like some mad bell-ringer forever ringing himself. Perhaps there was no creator but the temporal creation forever changing, that which was this chaos rolling like the dark flood, and he was part of it even as his dead brother was, his brother being that faceless face upon the darkening flood, and every man was every other man, and mortal was immortal . . .

Full-throated arias, untempered, socially conscientious, commingling. Kellner notes, too, how Miss MacIntosh, My Darling “appeared in 1965 to a largely negative press, mostly male, mostly bewildered, mostly angry. William Goyen in the New York Times Book Review praised it, but Time made cruel fun of it, and so did plenty of others.”

She survived that to immerse herself in a biography of, first, James Whitcomb Riley, a long ago promise to herself to resurrect the reputation of our fellow Hoosier, and then, instead, Eugene V. Debs, whose life would occupy the rest of hers and result in a manuscript of about twenty-five hundred pages. In Marguerite Young’s obituary in the New York Times, an editor at Alfred A. Knopf was quoted as saying that the book needed “just a little more pruning”; Knopf had accepted it three years before, with 1995 as a projected date of publication. It finally appeared in 1999 as Harp Song for a Radical, severely truncated to about one fourth its length . . .

All the stray manuscripts of Young ought to be printed, and as originally intended.
Posted by John Latta at 8:08 AM