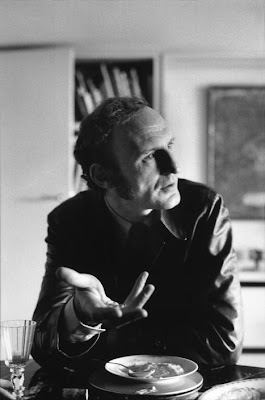 Engage—that grinding under
the hood draped over
your head is what they call teeth
masticating colossus
interrupted by spectral singularities
taxidermied into a white
formalist indifference to history
balancing out supper time
with you never mattered anyhow.

Abu Ghraib hood, no other reading for “hood” at present. A sort of American Golem underneath, the “masticating colossus” a shapeless mass of pure imperium, no less lethal for that, being “what we’ve become,” clay-made, ungainly, automatous, wholly indifferent: the vaunted “formalist” meaning “going through the motions.” Dolls stuffed fat, preening (“taxidermied”) for other inhuman dolls. “Supper time” (call it “global zupping”) in one possible reading opposed directly (“balancing out”) against “you never mattered anyhow.” Another:

Engage—all the angels and
saints deign to plead
necessity not need which is an
altogether different in
the eyes those are yours which
her moth is foreign
to me because it speaks so openly
when our people
were permitted only to compete.

Lautréamont claimed that poetry should be made by all. The world is tough enough to take as many poets as it can muster, so that it is foolishness to deny the value of a poet because he is “academy” or because he is not. The terms are never more than relative at best. Among makers, cross-breeding occurs continually: see Gunn on Snyder for example, in a recent Listener. It is interesting to look for those poets who find themselves, perhaps unwillingly, taken as bridges between contending schools. Is Creeley the most accessible of the Black Mountain poets? Has Lowell, in Life Studies, taken something from the other side? A poet is an ongoing process, a lifetime at work, focused now on one problem, now on another. It is only the commentators whose living is made out of treating a poet as if he were a discrete set of unrelated books; whose vested interest lies in splitting, antagonizing, bringing into conflict, destroying this living entity. The Arena now, should be as wide as it can be and set against the whining ifs-and-buts of the little shepherds.

So Nathaniel Tarn in 1968. Thom Gunn’s note regarding Gary Snyder begins with a poke at critic M. L. Rosenthal who “devoted only one-third of a sentence” to Snyder’s work in The New Poets: “The reason for the near-omission is that he was so interested in grouping poets into schools and movements that he found it difficult to perceive talent existing outside them. The mistake is common, but it is still a shameful one, since most real talent cannot be so classified and thus it gets overlooked.” That, today, it’s the poets themselves that perpetuate the shame of such pigeonholing, ought to be reason for alarm and censure.

“Like” and “like” and “like”—but what is the thing that lies beneath the semblance of the thing? . . . There is a square, there is an oblong. The players take the square and place it upon the oblong. They place it very accurately; they make a perfect dwelling-place. Very little is left outside. The structure is now visible; what is inchoate is here stated; we are not so various or so mean; we have made oblongs and stood them upon squares. This is our triumph; this is our consolation.

The meager triumph of reductionism. Regal consolatory diminishments. “We are not so various or so mean” akin to Owens’s “spectral singularities / taxidermied into a white / formalist indifference.”

Per contra (chancing the Pollyannaish, whereof any hint of altruism is seemingly fraught):

There is a beautiful action. It has an operative grace. It is when one, seeing some uneasy sleeper cold and without a cover, goes away, finds and brings a blanket, bends down, and covers the sleeper because the sleeper is a living being and is cold. He then returns to his work, forgetting that he has performed this small act of compassion. He will receive neither praise nor thanks. It does not matter who the sleeper may be. That is a beautiful action which is divine and human in posture and intention and self-forgetfulness.