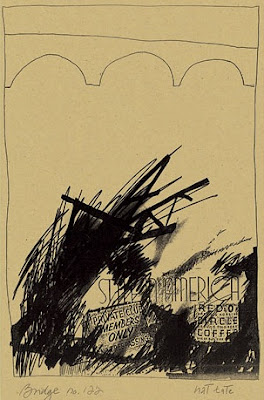 All the drawings in this series—and it was reputed to run eventually to over 200—were of similar format: at the top was the boldly stylized representation of a bridge, sometimes a tangle of girders, sometimes a simple arc, and on the bottom two thirds or half of the page was accumulated a sort of clutter or litter—slashing ink strokes, or furious cross-hatching, occasional half-representational figures, sometimes obscenely graffito-like, sometimes finely and carefully drawn, or lettering, or pasted letters, illustrations torn from magazines, skilfully juxtaposed collages in a style reminiscent of Kurt Schwitters. ‘I like bridges,’ Nat Tate once told an acquaintance, ‘so strong, so simple—but imagine what flows in the river underneath.’

(Pointed and improbable drollery in the Cedar Tavern: “‘That Crane fellow should charge you a commission,’ Franz Kline once jokingly observed to Nat when he later became a succès fou. ‘Hart is dead,’ Nat replied, flatly, ‘so it doesn’t matter.’ Kline denied this heatedly and fiercely until he was advised they were talking about Hart—not Art.”) Tate: who—orphaned early—’d grown up the adopted son of one Peter Barkasian, retired (“aged 36”) paper company (“Albany Paper Mills”) heir, in the rebuilt “summer house, Windrose, on the north fork of Long Island” (“loosely modeled on the Petit Trianon”); who’d studied painting in Provincetown “for the four summers of 1947-51 . . . under the eccentric but vigorously modern tutelage of Hans Hofmann”; who’d hung work—with “Barnett Newman, Lee Krasner, Todd Heuber and Adolf Gottlieb”—in a 1952 exhibit at a co-op gallery called Aperto run by a woman named Janet Felzer (1922-1977) who “went everywhere with an ill-disciplined, yapping Norwich terrier she called Pablo.” Felzer’s discovery of Nat Tate occurs whilst “driving back from Long Island to New York—she had been weekending in Southampton—with the poet and critic Frank O’Hara”:

They stopped for a drink in Islip and, killing some time, wandered into a local gallery there, which happened to be run by a friend of Peter Barkasian (from whom Barkasian had bought two Winslow Homer watercolours, it seemed). Half a dozen of Nat Tate’s Bridge drawings were hung in a back room.

Boyd: “The fact that Felzer was with Frank O’Hara, himself a poet (and an admirer of Crane’s work), seems to have consolidated her instinctive enthusiasm for the drawings.” Boyd, wholly overreaching, one thinks—is it possible to assess the hoax-worthiness of a hoax uncovered?—in a later portrayal of O’Hara (complete with “uncollected poem”):

For Nat Tate, Frank O’Hara remained a mentor-figure and friend. It is not clear if they were ever lovers (O’Hara was living with Joe LeSueur from 1955) but the relationship took on more professional dimensions when O’Hara, as curator, selected two of the White Building paintings for the 4th San Paolo Bienal in 1957. There is an uncollected poem O’Hara wrote around that time called What if we hadn’t had such great names? that captures some of the flavour of those heady days in the ’50s, when the art world looked to New York for its inspiration, and the city’s artists, it seemed, could do no wrong.

Hubris of the giddy concocter. (One must recall: Boyd’s intended audience composed of art world citoyens et citoyennes of the pre-millennial glut.) If O’Hara’s poem is witlessly unconvincing, there is nevertheless in Boyd’s book a lovely allegory of art-making at its most sterile, work deliberately and formally cut off from life, the Xerox of a Xerox of a Xerox (one recalls the puny exercises of homophonic translation). None of O’Hara’s being “mainly preoccupied by the world as I experience it” here. Boyd, quoting the journal of Logan Mountstuart (1905-1996), another of the conveniently dead.* He’s witnessing Tate’s painting of one of the Third Panel Triptychs, unavoidable period props in place:

He was swigging direct from a Jack Daniel’s bottle. He was working on a triptych and the final panel was primed and ready on the big easel. We listened to music (Scriabin, I think) and talked aimlessly about the forthcoming trip to France and Italy—where he should go, who he should see. Nat seemed to be waiting to reach a certain plateau of drunkenness, seemed to be waiting for the booze to trigger the precise moment. Suddenly he threw the dust sheets off the other two completed panels. There was, first, a nude, an orthodox odalisque, more yellow than flesh toned, and then, in the second panel, another version of it, more stylised and crudely flashy—very sub-de Kooning. Nat stood there staring at the two panels, drinking, and then literally attacked the big canvas with a wide brush and tubes of cadmium yellow, laying on great swathes of colour. He seemed quite deranged to me. I left after an hour with my still life and he was still at it, rubbing off most of what he had done with a rag then going hard at it again, this time with black and green.

Tate’s story ends in the only way conceivable: destroyed paintings, presumed drowning (Staten Island ferry: “the ship was midway between the Statue of Liberty and the Military Ocean Terminal at Bayonne, heading for the New Jersey shore and roughly in the direction of Union Beach”), body unrecovered. In Tate’s empty studio: “one large canvas placed against the wall, obviously recently started, a crosshatched mass of bruised blues, purples and blacks. Its title Orizaba / Return to Union Beach was scrawled on the back . . .” 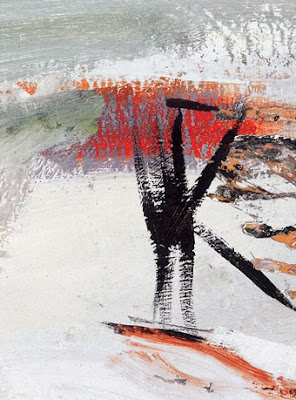