Jean Frémon, out of “The Absolute Paradox” (The Paradoxes of Robert Ryman):

The idea and the thing. The idea can be represented without loss, not the thing; it must stay itself, unrepresentable. Or represented only by the idea which presided over its construction.
Black and white photography, like the diagram, preserves the idea and says that the thing is elsewhere.

One idea of Robert Ryman:

A young man leaves Nashville, taking with him only his saxophone, his intention being to settle in New York to study jazz. In search of a job in order to survive, he finds himself a guard at MoMA. Ryman is already Ryman, no theory, not even an anecdote; he is simply there, museum guard, which is to say fully immersed, between Malevich and Barnett Newman.
One day he decides to buy paint and spread it onto a surface, is intrigued by the result that he achieves. Voluntarily reclusive in the most humble, craftsman’s manner, he renews this gesture for thirty years, always astonished by what he discovers under his paintbrush. It’s quite true that no one has repudiated and summarized two centuries of painting like he has. No one has more radically broken free from his predecessors and no one has spun the most legitimate concerns out more than he.

According to Littré, white signifies “that which is the color of milk, of snow, and the petals of the daisy.” Has anyone ever compared milk to snow, daisy petals to milk? Does it make sense to say that a certain white is lighter or darker than a certain other white? What is the standard? Milk minus milk, snow minus snow, daisy petals minus daisy petals, what would there be in common to these three mental operations?
Wittgenstein says that according to Lichtenberg very few people have ever seen pure white. So do most people use the wrong word, then? He adds And how did he learn the correct usage? —He constructed an ideal use from an ordinary one. And that is not to say a better one, but one that has been refined along certain lines and in the process something has been carried to extremes.

Ryman (out of Frémon’s “Leibniz and the Parrot”):

When I arrived in New York in 1952, one of the first books I bought was Finnegans Wake. Of course, I didn’t really read it, well, I read parts. I liked above all to read it aloud because it’s beautiful that way even if you don’t understand everything. It was such an abstraction of language. I read Beckett in the same way, the rhythm, the tone.

Out of an interview (Ryman):

I came from music. And I think that the type of music I was involved with—jazz, bebop—had an influence on my approach to painting. We played tunes. No one uses the term anymore. It’s all songs now, telling stories—very similar to representational painting, where you tell a story with paint and symbols. But bebop is swing, a more advanced development of swing. It’s like Bach. You have a chord structure, and you can develop that in many ways. You can play written compositions and improvise off of those. So, you learn your instrument, and then you play within a structure. It seemed logical to begin painting that way. I wasn’t interested in painting a narrative or telling a story with a painting. Right from the beginning, I felt that I could do that if I wanted to, but that it wouldn’t be of much interest to me. Music is an abstract medium, and I thought painting should also just be what it’s about and not about other things—not about stories or symbolism.
You don’t think of meaning?

There is a lot of meaning, but not what we usually think of as meaning. It’s similar to the meaning of listening to a symphony. You don’t know the meaning, and you can’t explain it to anyone else who didn’t hear it. The painting has to be seen. But there is no meaning outside of what it is.

Jean Frémon, out of “Codicil on Whiteness”:

One, and not the least significant, of the paradoxes of Robert Ryman’s practice lies in the use—not exclusive in the early years, but already widely predominant—that he makes of the color white. A well-known virtue of white is that it enhances other colors, and in a Ryman painting white causes everything that is not painted and which displays only its natural coloring to appear as color: beige, bistre, ecru, silvery, milky. . . .Words fail here since it is not a matter of hues taken from a tube bearing a name, but of things possessing the color of the substances which compose them: canvas, metal, fiberglass, paper. A color whose role is not to give the illusion of the thing. A color which is the very color of the thing itself. White is much more than a foil; it is in itself the most paradoxical of colors: seeming at first sight neutral and quiet, it is nevertheless ornamented with greater wonders.

Frémon (out of “Leibniz and the Parrot”):

“Nihil est in intellectu quod non fuerit in sensu,”* Beckett had in the 1930s picked up this phrase in Leibniz. Nihil in intellectu, more than twenty years later, is what Polly, Jackson’s gray and red parrot, says in Malone Dies.** Robert Ryman also has a parrot, it isn’t called Polly, but, more prosaically, Parrot or The Bird. I don’t know if Ryman’s parrot watches its owner as he works, but the idea of a Latin citation from Leibniz copied out by Beckett and transmitting itself from parrot to parrot to form the only serious commentary on a work of art delights me.

** Beckett (Malone Dies): “Now that I have no further use for him I may as well give his name, Jackson. I was sorry he had not a cat, or a young dog, or better still an old dog. But all he had to offer in the way of dumb companions was a pink and grey parrot. He used to try and teach it to say, Nihil in intellectu, etc. These first three words the bird managed well enough, but the celebrated restriction was too much for it, all you heard was a series of squawks . . .” 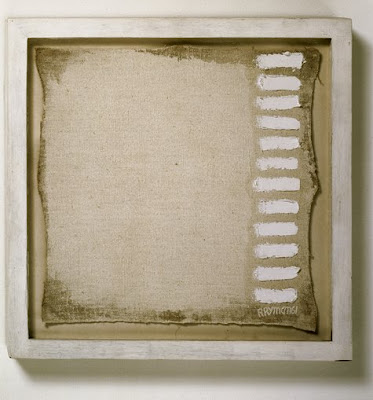 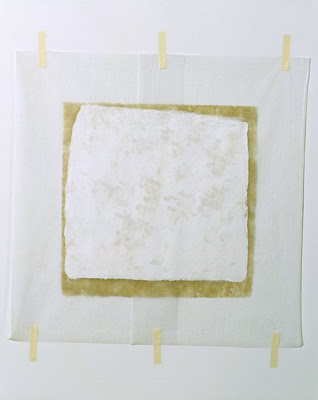 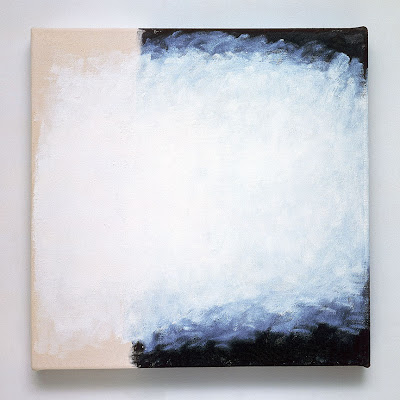