A Riff and a Bleat 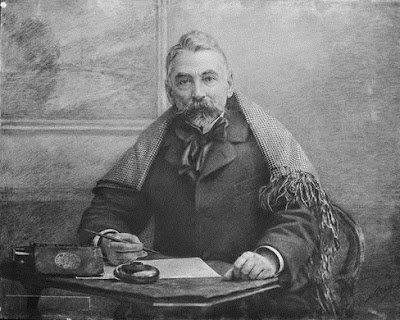 Half thinking I know what’s up, half knowing I think up what’s up. Fatigue of a sort. The sort in sors (Latin). John Aubrey knew that he “wanted” (meaning, lacked) “patience to go through Knotty Studies.” So he “tumultuarily stitcht up” what all he’d collected. “For I have not leisure to heighten my Stile.” That need to dodder into patience, its sere particularity, its refusal of mere ambient refuse. A need I “want.” The puncturing immediacy of a bird out the window, a blue jay, doing its astringent double-slash call, marks a break in the ongoing slurry of traffic. Call it: “Stanzas Ending with Bird Noise.” Lyn Hejinian (Oxota): “A word is not a point but a spot and prosody is a study of its motion . . .” Verbal presence is a glob. Unmathematical, excessive, inundatory the word, its globular stamp. The smeary word, its stain and capillarity. Michael Faraday’s towel left “hanging over the edge of a half-filled wash basin.” Writing the unintended puddle on the floor the next morning.

Somewhere in The Pound Era Kenner writes of “words ‘hung with pleasing wraiths of former masteries’” and labels it “Williams's phrase”—avers such “qualities the Objectivists sought to avoid.” Williams, out of In the American Grain (1925):

With Poe, words were not hung by usage with associations, the pleasing wraiths of former masteries, this is the sentimental trap-door to beginnings. With Poe words were figures; an old language truly, but one from which he carried over only the most elemental qualities to his new purpose . . . Sometimes he used words so playfully his sentences seem to fly away from sense, the destructive! with the conserving abandon, foreshadowed, of a Gertrude Stein . . .
This was an impossible conception for the gluey imagination of his day. Constantly he labored to detach SOMETHING from the inchoate mass—That’s it:
His concern, the apex of his immaculate attack, was to detach a “method” from the smear of common usage . . .

And yet, none go unworded, every human wraith and subjectivity burthened with it, the grease of what thinking (“sentences . . . fly away”). See Williams’s The Great American Novel (1923), Williams’s futile attempt to cut through, or to extract that “SOMETHING”: “The words take up the smell of the car. Petrol. Face powder, arm pits, food-grease in the hair, foul breath, clean musk. Words. Words cannot progress. There cannot be a novel.” I keep thinking of how, yesterday, reading a transcript of Susan Howe’s lecture “The Whispered Rush, Telepathy of Archives,” I got stopped by the marvelous phrase “Death, at the last was, was . . .” A tiny stammer in the reading of a few lines out of Henry James’s 1914 Notes of a Son and Brother:

. . . death, at the last, was dreadful to her; she would have given anything to live—and the image of this, which was to remain long with me, appeared so of the essence of tragedy that I was in the far-off aftertime to seek to lay the ghost by wrapping it, a particular occasion aiding in the beauty and dignity of art.

I read Howe’s “at the last was” as a kind of equivalence to “death,” a place where language itself becomes pure presence, or begins to exist only in the present tense. Is it in that wavering, in hesitance, in trepid gaffe (and in its obverse, intrepid onslaught and tumult and smear) that utterance is renewed, stripped of its slurry? Big claim for what is—“at the last was”—simply put, a “bibelot d’inanité sonore,” one way of translating “slip of the tongue.” Mallarmé, out of “Le Mystère dans les lettres” (1895):

The sentence may seem to stammer at first, hold back in a knot of incidental bits; then it multiplies, takes on order, and rises up in a noble harmony, wavering all the while in its knowing transpositions.
. . .
Words rise up unaided and in ecstasy; many a facet reveals its infinite rarity and is precious to our minds. For our mind is the center of this hesitancy and oscillation; it sees words not in their usual order, but in projection (like the walls of a cave) so long as that mobility which is their principle lives on, that part of speech which is not spoken. Then quickly, before they die away, they all exchange their brilliancies from afar; or they may touch, and steal a furtive glance.

Or Hejinian again, out of that most furtive book, Oxota: “Experience is only indirectly responsible for words.”

In an era of catatonically modest squeaks and one-liners, of tediously re-retailed video “clips,” of continually burgeoning (apparently—I refuse to “dogfetch” or whatever it’s called, knowing all the while exactly what I “like”) network chatter, of “feeds” tumbling forth a highly selected archive in mimic-succession, I read Kenner (The Pound Era) as warning:

There is no substitute for critical tradition: a continuum of understanding, early commenced. Remy de Gourmont surmised that the Iliad discovered today in the ruins of Herculaneum “would produce only some archaeological sensations,” interesting exactly as is The Song of Roland, illustrative of some vanished civilization. Precisely because William Blake’s contemporaries did not know what to make of him, we do not know either, though critic after critic appeases our sense of obligation to his genius by reinventing him. Something analogous is true of Gerard Hopkins, of whom contemporary taste, except for a few correspondents, had no chance to make anything; consequently, it is more of an effort than it should be for us to make of him what we do. In the 1920’s, on the other hand, something was immediately made of Ulysses and The Waste Land, and our comfort with both works after 50 years, including our ease at allowing for their age, seems derivable from the fact that they have never been ignored.

Writ roughly forty years back. A reminder (to myself, amongst “you others”) to entangle with “the considerable deposits of the now”—howsomever wrongly, or doggedly.
Posted by John Latta at 7:02 AM