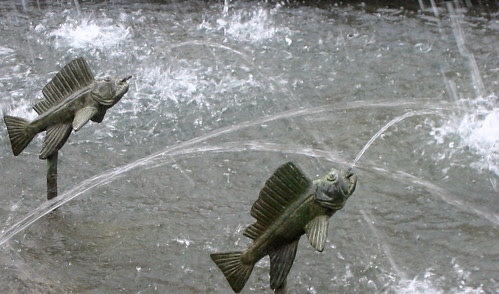 Ah, I see my habitual affable clarity’s return’d. Yesterday a duffer’s match with that demon Maxwell Bodenheim. It often begins like that: I see Stevens calling him a Junius and Scott Fitzgerald calling him a dainty nothing and I think to make a big rigamarole out of two negligibles, a Rome in a day kind of thing. That and my ongoing disappointment at the rickety biplane of a neccessary nay-saying (the war, the way we live now) that’ll only fly by means of ineffectual omnidirect’d rage or hedonistic smarmy sloth, the two available “fuels” to a whole generation. The shame a generation (we) ought suffer for allowing the criminals to continue. I read—just yesterday—lines of Milan Kundera:

People are always shouting that they want to create a better future. It’s not true. The future is an apathetic void of no interest to anyone. The past is full of life, eager to irritate us, provoke us and insult us, tempt us to destroy or repaint it. The only reason people want to be masters of the future is to change the past.

And, immediately, Ron Silliman’s dogged prose reiterations sizzled across my brainpan. Is it possible to want to garner control, to quash any anomaly, to such a degree as to attempt—clumsily, systematically—to fine-tune the erupting furious conglomerate past to the point of making one’s own work seem its rare inevitable outcome? Apparently it is. Point: Ashbery. To insist that Three Poems marks the emergence of some new kind of prose poem is excessive, an overreaching, a back-formulation. (Me, I never insist’d on the species, I look’d, noted the prose outline—printer’s conventions—and swallow’d a wry smile at the Ashberyesque manoeuvre, to call the pieces Three Poems rather akin to Jennifer Moxley’s tiny joke of calling a book of prose pieces The Line. A destability measure, definition of a laugh.) Lineages unsung run in the crevasses of those pieces—out of sermonry, out of the essays of Sir Thomas Browne, out of Emerson surely, out of Walter Savage Landor’s Imaginary Conversations, out of Clare and Chatterton, out of Apollinaire’s “L’Esprit nouveau et les poètes.” What’s—offhand—Three Poems’s relationship to Stevens’s “Three Academic Pieces”? (More, one’d wager, than “An uncivil shape like a gigantic haw.”) To limit the conversation to the successors of Æsop (like, uh, Kafka?) versus some ill-defined other “French” tendency smacks, mostly, of a need to read more varieties of prose.

Blackbirds are preferred by Baptista Fiera farre before Thrushes, Throstels or Feldefares, as being nothing so strong, hot, nor bitter; Trallianus commendeth all alike. Their feed is on little grashoppers, worms, hurtle-berries, juniper-berries, ivy-berries, bay-berries, and hawes; they are suspected to be a melancholick meat, because they be never found but alone and solitary, whereupon the Latines call them Merulas, that is to say, Solitarians.

Martinets are either smooth or hairy legg’d: for neither of them have perfect feet, but stumps instead of feet. Baptista Fiera in his treatise of Birds exclaimeth against them, and calleth them begger’s meat: engendring most hot and feverous blood, fitter to be eaten as a medicin to quicken eyesight and memory, then as a wholesome or nourishing meat; but being taken when they are new fledg’d, experience warranteth them a dainty and good meat, except they be over roasted.

Nightingales as Martial said, are nothing worth when their breath is departed; for as they feed filthily in the fields upon spiders and ants, so their flesh is unwholesome at the table.

Wrens feed finely, & sometimes fill themselvs so full of little flies, that their bellies are like to burst. Their flesh being salted cureth Strangullions and the stone not confirmed; but no man ever wrote that they give good nourishment.

Puffins being Birds and no Birds, that is to say Birds in shew and fish in substance, or (as one may justly call them) feathered fishes, are of ill taste and worse digestion; how dainty so ever they seem to strange appetites, and are permitted by Popes to be eaten in Lent.