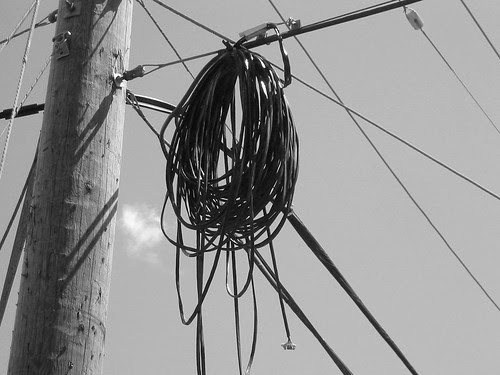 An unreasonably resolute electrical blackout, inexplicably sans tonnerre, blew a hole in my tiny quotidian writing slot (early evening), so I tuddle’d about in bougie-light, repudiating all my former selves, and thought hard (“for us all”) about the eight-year-old Colette, the way she got enamour’d with the French word for “presbytery”—presbytère—“with its harsh and spiky beginning and the brisk trot of its final syllables.” A private word, a curse word, a maledict, a spell—though it, too, apparently lost is luster (the way any Toledo-made jeep will): “I began to suspect that ‘presbytery’ might very possibly be the scientific term for a certain little yellow-and-black striped snail.” Truth is, I welcomed the blackout, sip’d a vermouth and ate a turkey sandwich, and consider’d how I’d lost my way. How, say, I am beginning to suspect the considerable efforts of daily utterance might possibly be idiot-work, a jumble or a growl for the merest jumble-Effekt, growl-Effekt. Or is it just August dog days condensing out into the usual autumnal morass, that annual degradation of service prior to winter. Verlaine: Les sanglots longs / Des violons / De l’automne / Blessent mon coeur / D’une langueur / Monotone. Enough long sobbing o-sound to make one go itchy with grief, or echt-grief. (LeRoi Jones’s report of Frank O’Hara, heckled at a reading by Kerouac, walking off stage “singing / ‘My silence is as important as Jack’s incessant yatter.’”) Or, O’Hara’s self-assessment (prognosis), regarding the work: “Mine is full of objects for their own sake, spleen and ironically intimate observation which may be truthfulness . . . but is more likely to be egotistical cynicism masquerading as honesty.” (I can get behind that, in a kind of historickal memoirs of the late fight at Piggwacket kind of way.) What I mean is what’s beckoning (always beckoning) is a dissolving (see Ronald Johnson):

Though, imperturbably, that, too, gets its invariable comeuppance, in what follows:

The old agonizing fix of merger and conglomerate mud, it’s all one “writing” . . . Yeah.

Finish’d Andrew Epstein’s Beautiful Enemies. At the risk of sounding like “some aficionado of [O’Hara’s] mess” by saying it, I question whether Epstein is correct in assigning “Finding Leroi a Lawyer” to O’Hara. I say, “‘That’s not like Frank!’” with the merest whiff of evidence, and no way of ascertaining it. (I do note that Kevin Killian calls it the “singlemost dumbest poem O’Hara ever put to paper,” my reaction, too, and there’re some clunkers here and there in the “opus” for comparison.) Epstein says the poem’s “never been published or collected, commented on or acknowledged, and I am aware of no copies other that the one in the Koch archives. Like other fugitive O’Hara pieces, it is very possible that it simply fell through the cracks, as it was not included in Donald Allen’s meticulously edited posthumous collections of O’Hara’s poems, including Poems Retrieved. (Are there other “fugitive” pieces, found after Poems Retrieved?) Here’s the poem, out of “the O’Hara papers in the Kenneth Koch archive at the New York Public Library”:

Epstein admits that the poem “almost reads like an intentional self-parody of O’Hara’s famous shopping trip in “The Day Lady Died.” (And parody of other O’Hara pieces—the Lana Turner one, certainly.) My bet: a Kenneth Koch spoof. The rhythms, particularly in the first few lines, lack O’Hara’s incisive speed—they lumber, full of the clumsy (“thanking him for his having . . .”) and the extraneous (“but meanwhile”). Does O’Hara, elsewhere, ever get LeRoi’s name wrong, the way the poem does (twice). (For all’s fierce quickness, O’Hara is usually meticulous—no skimping the details.) What’s that coy curiosity “schmootz” (O’Hara’s rarely coy). I am curious: a handwritten copy? Typed? Whose typewriter?