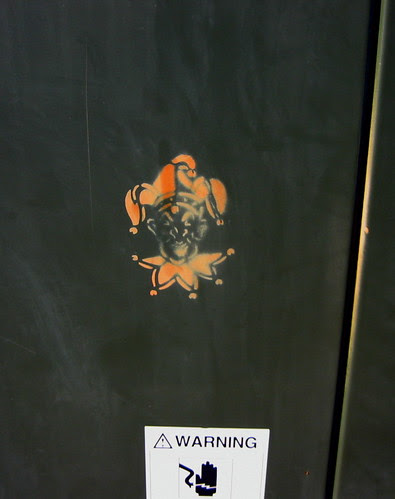 Weekend of a little swimming, the usual chores and errands, some regular irregular walks, and a stop at the Saturday morning rummage emporium to uncover a reissue of Sontag’s Death Kit and a Grove paperback of Beckett’s Malone Dies, thinking for about the number four hundredth coup how I ought to’ve found myself a citify’d young cafeteria loiterer, “a great strapping lad with terrible teeth,” circa 1956 when that book got publish’d. (If only I could’ve arranged it. That or an eighteenth century North American botanist, ornithologist, thief of bird eggs and paleontological specimens.) For a dollar apiece. “A minimum of memory is indispensable, if one is to live really.” That versus: “Gurgles of outflow.” (Beckett.) On the Sontag: hard it is to skim through a book with the name “Diddy” jumping out nearly every page . . .

Squatted becalm’d for a hour in a bookshop late Sunday, looking over a fat Auden Collected, the Edward Mendelson-edited thing. Pick’d it up to see what (if anything) it included of The Orators (1932), a book I do not know, a book Frank O’Hara preferred of all Audens. (A prose and poetry miscellany miscible, not unlike the terrific MacNeice-Auden Letters from Iceland.) Slowly jigged by the vernacular, the conversational in Auden, that series of hooks and cross-stitchings against the fetter’d metric embroidery that comes to sound like a source for the O’Hara offhand equal to Williams. (My periodic retreat to Auden, the “era” of a whole raft of little sixteen-liners that, embryonically at least, resemble the ditty, “The Fall of Rome”— “Caesar’s double-bed is warm / As an unimportant clerk / Writes I DO NOT LIKE MY WORK / On a pink official form.” Because I thrill so to its nonchalance.)

Reading Nabokov’s The Gift, the last of the Russian books. (For years I directed my attention only to the works written in English, reading for Nabokov’s rapturist style, thinking the translated pieces’d divulge that only rather waterily. Considering, though, the way the vigilant lepidopterist stood mutability’s sentinel over, particularly, the French and English versions of those works, rewriting here and there, I suspect the raptures soak the oeuvre throughout, American sun splashing off the samovar. I love Nabokov’s habit of nimbly exfoliating the bare twig of metaphor, leafing it out, running it through a summer season of witness to, say, some boys sawing off a nearby branch for the perfect Y it contains, perfect for a slingshot (and here, a short digressory featurette regarding a smooth pebble and a windowpane no longer containing its tidy parallelogram of blue sky), and finally dropping it in a satisfying heap, sere and brown in its place beneath the tree of the story (though, often, one finds oneself in the laconic company of the groundskeeper, raking at that exact pile of mortuary foliage). I love how Nabokov unabashedly speaks of inspiration as “a conversation with a thousand interlocutors, only one of whom [is] genuine, and this genuine one must be caught and kept within hearing distance.” Though, frankly, who talks these days (and so breathlessly) about such an ossification of the spirit as “inspiration”? We post-moderns bound forth fully amused by such inaccuracy, completely wind’d by the mere process of rearranging our wordstuffs in the ever-meagre pantries of our “imaginations.” No more the second-hand god with garlicky breath and nose-pores agape coming close to mutter imprecatory nothings at us. (We got our own second-hand suppliers, whole lumbering retinues of word-soldiery, amassable at a click. Who needs the potency and tom-tom of the great long upsuck of the radiant spiritus?)

And I love the offhand literary slights of Nabokov: a refusal of obeisance to that particular clumsy god. So, the pomp of one character’s poetic output is recall’d with revulsion, “word-fissures, the leakage of poetry.” So, one “clean-shaven old man rather resembling a hoopoe” is notable for ’s “eyes which were too good-natured for literature.” So, one editor of a Berlin émigré rag good-humoredly accepts poems because it’s “absolutely immaterial to him what adorned the nonpolitical part” of the paper and, “poems, since they were mere trifles, passed almost entirely without control, trickling through openings where rubbish of greater weight and volume would have got stuck.” How refreshing a snarly skepticism is against endless humdrum plaidoyant defenses of poetry’s “special case.”

Is The Gift the novel most likely to please the sleeping entomologist in the midst of one’s clamoring selves? Pages of insect lore, the poet Fyodor Godunov-Cherdyntsev’s report of ’s great collector father’s teachings:

He taught me how to take apart an ant-hill and find the caterpillar of a Blue which had concluded a barbaric pact with its inhabitants, and I saw how an ant, greedily tickling a hind segment of that caterpillar’s clumsy, sluglike little body, forced it to excrete a drop of intoxicant juice, which it swallowed immediately. In compensation it offered its own larvae as food; it was as if cows gave us Chartreuse and we gave them our infants to eat.

Worthy (particularly by way of the anthropomorphism) of the terrific Jean-Henri Fabre (though Nabokov elbows him out of the way with a putdown—“popular works, full of chitchat, inaccurate observations and downright mistakes.”)