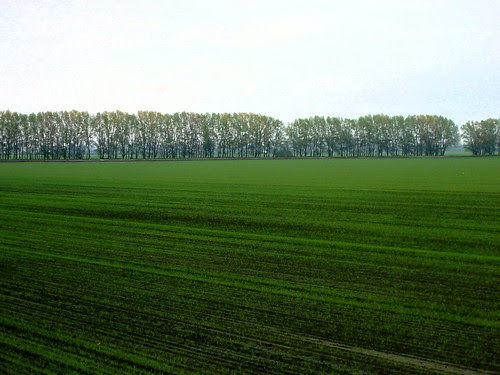 A Line of Trees

Stevens again, distract’dly. (Weighing the plusses and minuses: of writing out of what immediately seems to preoccupy one, inchoately, winging it. Or, of letting that fester, soak, remain a kind of undersludge to what one tackles now. About a hundred metaphors got mash’d in that iteration.) Wallace Stevens, to Elsie Moll (in 1915):

I went up to the Botanical—no: the Zoological Garden this morning to see a collection of birds that Professor Beebe has just brought up from Brazil. There was a hyacinthine macaw, chiefly of interest because I could see what color hyacinthine really is! Then I went off to the Botanical Garden where I spent several hours in studying the most charming things. I was able to impress on myself that larkspur comes from China. Was there ever anything more Chinese when you stop to think of it? And coleus comes from Java. Good Heavens, how that helps one to understand coleus—or Java.

A footnote points to “Six Significant Landscapes” with its initial lines depicting a man in “the shadow of a pine tree / In China” who “sees larkspur, / Blue and white.” Inimitable colors of Ming dynasty porcelain. Broadly a collector, a magpie, a stickler after minutiae, fastidious for its perfections, is Stevens. Against that: the abstract, the big idea (few these be, and repeatable). (“What color hyacinthine really is” combines the two: the evident enamour for the swift word itself, its lithe and nimble skittishness, play’d against the way it is stopped by an object, the macaw, and made tenable. “In my room, the world is beyond my understanding; But when I walk I see that it consists of three or four hills and a cloud.”)

Stevens again, roundabout’dly. Ryan Murphy recently sent me a copy of what he call’d “the latest one-shot chapbook from Prefontaine Press: The Children’s Museum by Ange Mlinko.” What I know of Murphy is rather little—he author’d Down with the Ship (Otis Books / Seismicity Editions, 2006), a book I list’d amongst my favor’d last year in Steve Evans’s Attention Span. Out of somewhere—the osmotically-deliver’d mélange of gossip, shoptalk, cant, rumor, &c.—I knew he “did” fine letterpress chapbooks, apparently under changeable monickers (the press). In a letter he notes that the “project remains a proudly haphazard venture. Distributed for free and through a mangy and sometimes unwieldy mailing list. With no fixed production schedule or future plans.” A combo of directness, humility, pride, and rightful—not earnest, not negligent—doing I admire. (I note, too, it’s Murphy who’d tout’d Robert Dana’s Against the Grain: Interviews with Maverick American Publishers, not Kyle Schlesinger as I’d claim’d.) The book: bound in pale green covers with black endpapers, sewn, with titling in a blackletter-style type call’d Agincourt—titling that occurs twice, in black in its usual position, and in a soft grey oversized shadow title (or partial title) bleeding off the top of the page. The front cover reiterates the shadowing by printing (in pale green on paler green) the title and author’s name similarly partial, bleeding to all four edges. Lovely. As if, in Stevensesqueries befitting:

Above the forest of the parakeets,
A parakeet of parakeets prevails,
A pip of life amid a mort of tails.

Stevens again, pointedly. Here’s Ange Mlinko’s piece, “A Hike Is the First Abstraction,” the first poem in The Children’s Museum:

A hike is the first abstraction. It stirs the land
and brings a blush to the timber.

Listing like Quimper and Coimbra and Grenada
adenoidal lemons amid suaveness of leaves.

A cypress and its sidecar
carve stature out of the turbulence of the air.

Harder than anything on the scale of hardness, air:
irritant of scrimshaw, ironist of Appalachias.

Between pine fringe and palm coxcomb, sky
kayaks. Their silhouettes like mirror mitts

catch what they discard at the same time,
metonymy of the cone and prototype of the fledged.

So when my son asks where we’re going,
ingénu of predestination—I’ll hedge.

That emphatic declarative—“A hike is the first abstraction”—somewhat mysterious, though utterly convincing in its brusquerie, seems a happy legacy of Stevens to me. (I think of the implications of the sentence, work’d out in the course of the poem, kin to something like the phenomenological perceptions of Merleau-Ponty: the mind’s uncanny ability both to replenish itself sequentially—object by object—hurtling through time and space, and to contain it all, the smear of time itself. “Past and future exist only too unmistakeably in the world, they exit in the present.” Or, “catch what they discard at the same time.”) Against the abstract, the leverage point of the phenomenological where presence is deploy’d by a kind of interpenetration, “stir” and “blush” in the moving, against that: particulars. The other meeting point for Stevens and Mlinko. Well I can picture a content’d Mlinko note regarding the pursuit of hyacinthine. It’s a preference (an adhesion) for the delectable (root’d in delight) object, what stills the ongoing story, is exactly a “hedge” against the wearing airy continuousness. “The eye’s plain version is a thing apart, / The vulgate of experience. Of this, / A few words, an and yet, and yet, and yet—” So, Quimper (the word), so Coimbra (the word), moving m by adenoidal m. So, in a terribly Stevensesque phrase, the air is “ironist of Appalachias”—moving to wear, to flatten (iron), ironically hard. So, that final “hedge” plugs itself snug against “fledged” in the only rhyme present for a reason (form having its say): to reiterate a preference, a choice made for the particular (son-shared) now, closing it up, stopping the lyric moment. Finally, seeing what—too—the poem knows, it’s a heartbreaking moment.