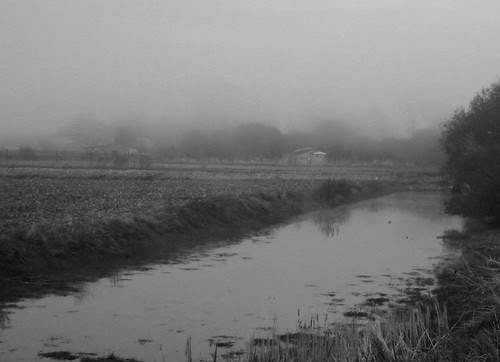 The humidity’s tonguing everything, getting tongues wagging, you know the way people talk. And nothing accomplish’d in the interim, one’s got to make it up in situ, hazardous-acclamatory style. I did snooker home with the newish Library of America Hart Crane—I never decide if Crane’s an embarrassment to the “clan” or a thief of’s own riches. Example: amidst the “unpublished poems & fragments” I lit briefly on “Lenses”:

In the focus of the evening there is this island with the buzz of saw mills, the crunch and blast of quarries; furnaces, chisels and ploughs.

And the idiot boy by the road, with carbonated eyes, laughing or extending a phallus through the grating,—talking to a kite high in the afternoon, or in the twilight scanning pebbles among cinders in the road through a twice-opened tomato can.

Bottom of page. I consider’d it complete, a sketch, a sort of spatial shift “worlds in the whorl of a fingerprint” percept, liked the “carbonated,” query’d the “twice-opened” (a little imprecise, literary). Turn page—turns out there’s more—“And there is work, blood, suet and sweat,—the rigamarole / of wine and mandolins . . .” The incipient tendency to explicate, to provide a consider’d “meaning” to what he’s up to—and worse, what’s prose becomes lineated, in—narrowing to handle-sized—the calligrammatic shape of a magnifying glass, what field biologists call a “hand lens.”

The casual industry of skimming and alighting: turns out there’s a poem “about” that same boy in Crane’s gathering “Key West: An Island Sheaf”:

Sheer over to the other side,—for see—
The boy straggling under those mimosas, daft
With squint lanterns in his head, and it’s likely
Fumbling his sex. That’s why those children laughed

In such infernal circles round his door
Once when he shouted, stretched in ghastly shape.
I hurried by. But back from the hot shore
Passed him again . . . He was alone, agape;

One hand dealt out a kite string, a tin can
The other tilted, peeled end clamped to eye.
That kite aloft—you should have watched him scan
Its course, though he’d clapped midnight to noon sky!

And since, through these hot barricades of green,
A Dios gracias, grac—I’ve heard his song
Above all reason lifting, halt serene—
My trespass vision shrinks to face his wrong.

I rather think: spit it out, Crane! What’d seem’d direct and swift and apt is tottering through an upheaval of “literature,” no? “Carbonated eyes” become “squint lanterns”; the lovely “extending a phallus through the grating”—wherein the boy’s member becomes a kind of zoo-animal—almost completely disappears: “likely / Fumbling his sex.” A particular mess with that “One hand dealt out”—an act that’d seem to require two. And a complicated “exegetical summing up” interposes its grubby fist at the end: here, the tin can seems “once-opened,” that is, if the boy “clapped midnight to noon sky”—a necessary literary night—it must be because there is but one “peeled” (imprecise) “end.” (There’s a whole ’nother thing starting up in the words “trespass” and “shrinks”—Crane’s push-pull sense of fascination and violation, unexplored.)

Third exhibit. Sensing that pull in Crane, I pour’d my tired lanterns throughout the letters, help’d—I add—by the fact that the unpublish’d piece is dated “c. 1926-27.” Sure enough: in a letter to Waldo Frank, datelined “Nueva Gerona, Isle of Pines, Cuba, August 19, 1926” one reads:

I have made up a kind of friendship with that idiot boy, who is always on the road when I come into town for mail. He has gone so far as to answer my salutations. I was unexpected witness one day of the most astonishing spectacle; not that I was surprised.—A group of screaming children were shrieking about in a circle. I looked toward the house and saw the boy standing mostly hid behind the wooden shutter behind the gratings; his huge limp phallus waved out at them from some opening; the only other part visible was his head, in a most gleeful grin, swaying above the lower division of the blinds.

When I saw him next he was talking to a blue little kite high in the afternoon. He is rendingly beautiful at times; I have encountered him in the road, talking again tout seul and examining pebbles and cinders and marble chips through the telescope of a twice-opened tomato can. He is very shy, hilarious,—and undoubtedly idiot. I have been surprised to notice how much the other children like him.

In the looking for that, stumbled on a few lines written just a month or so earlier—to William Wright—where Crane complains about the work of writing (and largely expresses my troubled sense of the result). He’s envying those “who have intensive work to do without having to wrestle with either angel or devils to continue with it”—and says:

I get awfully exhausted sometimes, trying to achieve some kind of consistent vision of things. But I don’t seem to be able to relax—and knowing quite well all the time that most of my energy is wasted in a kind of inward combustion that is sheer nonsense. All else seems boresome, however, so I must continue to kill myself in my own way.