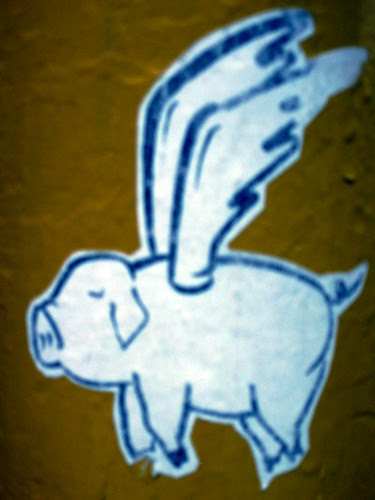 Reach’d for my neck at the hair-trigger of a something moving there, hand come away with a friable (crummy) miniature black thing (in pieces). No flea’s friable like that. No flea’ll come apart without what one hacksaw it into two halves with a thumbnail. Why the sour-mash colloquial puttin’ its hand in my speech? In the midst of reading the opening piece in Benjamin Friedlander’s brand new collection of early work, The Missing Occasion of Saying Yes (Subpress, 2007). Insanely terrific that title, and a damnably handsome book. About two hundred pages of poems “written between 1984 and 1994,” in four sections—“Emerald City,” “Time Rations,” “Covenant Algebraic Melody,” and “Adventures in the Vernacular.” Complete with an index of titles and an index of first lines. In a perfect smallish format, something like four-and-a-half by seven inches—hand-sized, portable, for use. That first bug-interrupt’d poem:

She bought the boot that kicked the shit
of every blasted empty littered can. Then George
called to say he gave the wrong address for Allston
Way and didn’t make bail. A lay-awake dragweight
melancholy
rulebound and clock known / compressed of a step
back through
the tantrum. Chartered roads go there
empty handed and speak through glass
where State of Grace v. Wrecked & Abandoned
Sailing Vessel would be authority. Argued before the
sleepless
this eventual day of January, 1988.
Forty minutes away by car
&
“money’s only good if you don’t die tomorrow”

All kinds of lingo. There’s “The House That Jack Built” echoing in that first line—a kind of childish glee temper’d with almost blasé despair—that gets interrupted by “Then George . . .” (a smidge less abrupt than “And then went down to the ship”). There’s a kind of long-a keening to “lay-awake dragweight” that slips into spondaic perimeter markers “rulebound and clock known” (wherein one hears, too, lockdown, clipped jail talk). Beginning with “Chartered” the language goes legal, lawyerly, mocks the airs of “would be authority” (with higher authority getting its poke in the ribs—“Grace” and “Vessel”). The doggedness of justice “this eventual day” and street legal demotic proverbial wisdom in the final line—akin to kid-rhyme, circling back to the beginning. There’s a remarkable ear putting that together—too, a condensing intelligence. Encompassing realms and washes in a few lines.

They get smaller. Thumbing around, the way one considers a poet—I’ve known of Friedlander’s poetry for several years without having read much of it, or much of it closely—I think of Dickinson, of Celan (fearless neologizing), maybe a little Larry Eigner, a little less Robert Grenier. Friedlander’s tendency—even in the tiniest pieces—is to complicate and combine, to put things into relation by inextricable (taut, knotty) means, rather than by “mere” juxtaposition of perceived details, or by the decontextualization / recontextualization of sampled speech. The results go beyond the simple ironic gulp / snicker of recognition, and ask a little readerly (or “writerly,” if one’s using Barthes’s nomenclature) exertion. A kind of “value-added” poetry, one’d say in a fiscal fit, rarely “spent” in one brief look. Here’s a small one that strikes a chord with “Emerald City” (perhaps) by being titled “Rulebound”:

merely to split worlds
spinning so slowly
my
sweet ablative you

And typing that I think of Olson (“What does not change / is the will to change”) though, oddly enough, there’s likely something of John Donne’s “A Valediction: Forbidding Mourning” in the adamant (moving) stasis here, the way the emphasis is put (daringly, using a rhyme old as water) exactly balanced between “—so trued—“ (the em-dashes serving as pointers) and “you.” Considerable mischief: that “apprised” calling up “prised” (pried off, pried apart) and “prized,” along with “apprehended,” “learnt”—in a sense the line stands for all the poem holds to itself. “Ablative,” the (other) point where the poem’s diction gets its register jolt’d, name of the Latin noun case that expresses such things as direction, cause, agent—ablative’s root pertains to “removal, carrying away.” If echoes of the whole tradition of “pieces for absent lovers” bounce knowingly through Friedlander’s poem (think of Donne’s lines, “Dull sublunary lovers’ love / —Whose soul is sense—cannot admit / Of absence, ’cause it doth remove / The thing which elemented it”), there is, too, an affective mocking of that tradition, trigger’d largely by the change-up thrown by that “ablative.”

I first heard of Friedlander, I think, through Don Byrd, who mention’d (circa 1995) I ought to examine a paper about O’Hara and race—I in the midst of cobbling together a dissertation “about O’Hara.” I think I pegged him (in my brainpan) as O’Hara scholar. Astonish’d, somewhat later, to learn (I must’ve ask’d) that Friedlander was writing about “Emily Dickinson and the Civil War”—that’s how I recall it—for a dissertation at Buffalo. Astonish’d that he’s putting together a book of Olson prose, and Eigner works, and the impeccably ludic provocation of Simulcast: Four Experiments in Criticism, and several collections of poems, chapbooks and up. (Astonish’d to learn just now that he’s putting together a Creeley Selected Poems, 1945-2005 for publication in late 2007.) What I admire: the restlessness, the “expanse” of what Friedlander sees as “fit for inquiry”—if one checks into the manic shutterbugging here, one’ll see document’d, too, amongst much else—overlook’d nineteenth-century women writers, patriotic displays in Bangor, Maine, Poundian archives, Italian political cartoons, Shakespearian actors—an wide-open maw of pursuits. In an era of close-fistedness and intellectual narrowness, there’s something entirely refreshing about Friedlander’s enthusiasm and reach. Against which, that is to say, recognizing the possible dangers of such, the foibles of the “vex’d” and “gaseous” and terribly vexing Mr. Pound, another poem:

The first principle of academic cricketism
is expand,
wandering home
gaseous in our anti-chastity

Work done near solely by sound: against the slithering rustle-away of all the s susurrus of “gaseous,” “chastity,” “flimsiest,” “whistlings,” &c., one poses the clarity of the disburden’d “cold damp night”: art.