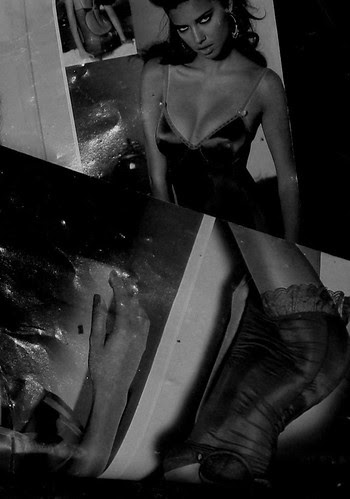 “Lingerie in the Grass, Alas”

Does literary existence, apart from one, the real one, which is spent in awakening the inner presence of harmonies and significations, take place, in the world, otherwise than as an inconvenience—

So, Stéphane Mallarmé, in Divagations: the author’s 1897 arrangement, together with “Music and letters,” translated by Barbara Johnson (Harvard University Press, 2007). In a sassy tout court “Preface,” Mallarmé calls the writings “journalism,” (wherein, though, one “can’t help throwing toward the light, over the heads of the multitudes, some truths”) and insists: “This is a book just the way I don’t like them: scattered and with no architecture.” And, perpetually dodging: “One always has the excuse, through all this chance, that any coherence found in the book was aided by its assembly, and perhaps, too, by always saying the same thing.” I like that. I like that nonchalance kowtowing to genius.

I must’ve dawdled a little with Mallarmé’s prose—whatever I found—in my mingy incorporal nether-history somewheres, and Olson too. (One pleasant task is constructing sentences—and if, a tail be needed for a dog-shaped horse, I supply it pronto, even though it make the horse bark.) (Now I need a minute to fossick in the Olson indexes: the man, accordingly, never breath’d a whit of Mallarmé.) It’s the chop—I admit it—in the water here (end of “Crisis of Verse”) that made me think of Olson (I keep thinking about Olson, he’s “nearby”):

Verse, which, out of several vocables, makes a total word, entirely new, foreign to the language, and almost incantatory, achieves that isolation of speech; negating, with a sovereign blow, despite their repeated reformulations between sound and sense, the arbitrariness that remains in the terms, and gives you the surprise of never having heard that fragment of ordinary eloquence before, while the object named is bathed in a brand new atmosphere.

Okay, I admit it, it’s only the preponderance of virgules that Olson’d it. Tempt’d I am, to do it up like an exegete with half-bracket’d lexia and ponderous citations, wha? And then, thinking about lexia versus the exegetical phrase—I’m coasting here—going along with mere brash in my engine—I recall how Barthes admitted it (parenthetically, sotto voce, in Balzac’s hearing, that social climber!): “Literature is an intentional cacography.” (Where’d my Urquhart Rabelais go anyhow?)

The Mallarmé: “Verse” (in French) is always the line. Mallarmé’s seeing the “unit” as the line—“incantatory” (music) and “speech” (speech)—he’s the French Zukofsky—poignant, absolute, avant la lettre. (Note for investigators: What did Zukofsky say about Mallarmé?) Every line is a neologism, or a universe, one-line’d. Mallarmé didn’t cotton to no “poèmes en prose” though he admired nutty William Beckford’s Vathek and he of the “vision of untroubled uprightness” Charles Baudelaire (who “contemplates, alone, in the proud billowing fold of consequences, the Monster-Who-Cannot-Be! Fixing on its flanks the wound of a look both affirmative and pure.”) (Mallarmé also admired nutty Loie Fuller—“insofar as she spreads around her the fabrics she then brings back to her person, through the actions of dance, everything has been said, in articles, some of which are poems.”) And then there’s the matter of the pieces (in prose) collect’d here under the title “Anecdotes or Poems.” Which not infrequently erupt oddly enough, tossing out M.’s own lyrical nuttiness: “—You meanie, you often say naughty things.” Or, “The full stop is measured by the cadence of my determination.” Or, “I am racked with contradictory states, pointless, distorted, and affected by the contagion, the shiver, of some imbecilic ebriety.” (Rhymes with yesterday’s Dawn Powell (nutty Dawn): “I like the way everything looks so crazy when you aren’t drinking.”)

Point is, the talk about “negating . . . the arbitrariness” in that “several vocable’d word” (or “total word’d line”) is posit’d against itself—the “brand new” (the new is always arbitrary). Even Mallarmé’s lingo betrays the clash: “surprise” versus “ordinary.” Upper limit, lower limit. We bathe still in that exact fuddled atmosphere. Musicking the colloquy.

Too, there’s the “Capsule Sketches and Full-Length Portraits.” Villiers de l’Isle-Adam, Verlaine, Rimbaud, “Tennyson Viewed from Here,” Poe, Whistler, Edouard Manet, Berthe Morisot. In the piece about Rimbaud, written in April 1896 for one Harrison Rhodes, editor of a North American journal call’d The Chap Book Mallarmé point’d to “a mysterious something about him either proudly or meanly flaunted, that recalled a daughter of the people, and his laundrywoman appearance, because of his enormous hands, reddened with chilblains resulting from rapid changes of temperature, which might have indicated even more terrible jobs, since they belonged to a boy” and chided purveyors of “cheap anecdotes.” Hands: how disappointingly chubby Frank O’Hara’s look. How Malcolm Lowry hated (and hid) his. Isn’t there a whole missing history of writers’ hands? “Signifying monstrances.”

Gobs of Spicer in the choosing, “nul ptyx” in the means, that rockin’ “Insolite vaisseau d’inanité sonore,” yo: “. . . following the same instinct for rhythm that chose him, the poet doesn’t forbid himself from seeing a lack of proportion between the means unleashed and the result.” And, one adds, prodding that lack up into a fury, an exult, an insobriety, a flood! (In “The Demon of Analogy” Mallarmé notes how he’s assault’d one day by “haunting and accursed fragments of an absurd sentence”:

Like that. And bravely, heroically, futilely, fights it—“I took a few steps down the street and recognized in the “nul” sound the tight string of a forgotten musical instrument, which glorious Memory had just revisited with its wing or its palm, and, putting my finger on the secret behind the mystery’s artifice, I smiled and pleaded, with all my intellectual wishes, for a different speculation”—to no good end. “Then I fled, strange person, probably condemned forever to wear mourning for the inexplicable Penultimate.”) Strange person. Aboli bibelot.

Faulkner, in 1926 (Soldiers’ Pay): “Only the ageing need conventions and laws to aggregate to them-selves some of the beauty of this world. Without laws the young would rieve us of it as corsairs of old combed the blue seas.”