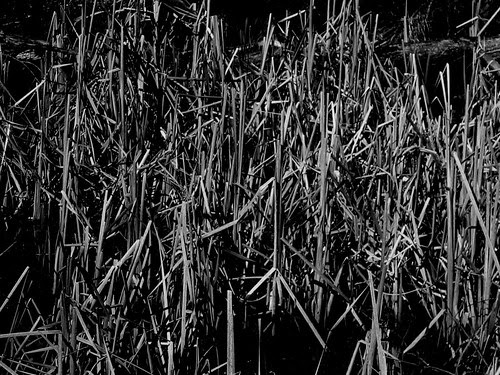 Out briefly into the suburb-encroach’d fields, and back in plenty of sunlight. Trying to find a Hart Crane line about “action,” I stumble over: “I think that the artist more and more licks his own vomit, mistaking it for the common diet. He amuses himself that way in a culture without faith and convictions . . .”

How easily and completely I get blown off course—looking for a line about “a dog eating its own vomit” in Charles Wright’s notebooks (found, though not “usable,” not so succinct, nor apt as I’d recall’d), I end up with: “One of the differences between poetry and prose is that—good or bad—lines are final. Sentences are never final, but ceaselessly rearrangeable.”

So I fetch The Grave of the Right Hand, wherein one locates a few Wright prose poems, the only ones I know. Intending to study one, rearrange it, only to note (with a brainpan-rearranging snort) that it’s one sentence long:

And when, that night, the unseasonable rain (the hail a shredding sound in the lemon trees) thudded against the lumbering of the bay, in August, haunting the dark with a querulous whiteness, he retired to the basement room under the house to study the various aspects of water, the ships in sudden counterpoint on the rising scales of the sea, and to wait for the breakthrough, across the barren hills of his brain, of the bronze soldiers, for the swelling flash of their knives.
Positano

Backlit by the Rimbaudesque “savage parade,” methinks: it’s the soldiery that does it.

Okay, for “scientific” purposes (“so I contradict myself”)—three rearrangements of sentences within a paragraph (out of Ron Silliman’s Paradise):

Remember the days when Bob smoked dope all the time? Big slow jet, low over the horizon. I’m impatient that each word takes so long to write. All cotton pleated chino twills. You’re a commie, too. As when, in the newspaper, an article on how to ride a camel brings tears. Her eyes on me wide and brown. Well, Masanori Murakami has been released. Aka will, verb transitive. There is no pain equal to the memory of pain. My life is not your symbol. Historians eke rhyme from fact.

Big slow jet, low over the horizon. Her eyes on me wide and brown. There is no pain equal to the memory of pain. I’m impatient that each word takes so long to write. As when, in the newspaper, an article on how to ride a camel brings tears. All cotton pleated chino twills. My life is not your symbol. Historians eke rhyme from fact. Aka will, verb transitive. Remember the days when Bob smoked dope all the time? Well, Masanori Murakami has been released. You’re a commie, too.

Well, Masanori Murakami has been released. Big slow jet, low over the horizon. My life is not your symbol. Her eyes on me wide and brown. You’re a commie, too. There is no pain equal to the memory of pain. As when, in the newspaper, an article on how to ride a camel brings tears. Aka will, verb transitive. Historians eke rhyme from fact. All cotton pleated chino twills. Remember the days when Bob smoked dope all the time? I’m impatient that each word takes so long to write.

Effects of rearrangement mostly local. The tiny twitters of the (various) affect-inducements of (various) juxtapositions differ (variously, locally) in kind, not in degree. The overall disjunct-patter pattern—picture an array of points, comic-tragic along the x-axis, human-inhuman along the y-axis, spattering out into the four quadrants—is going to elicit (generate) a similar line (hyperboloidal or whatnot) no matter how the sentences are arranged. With a bigger sample, it’s likely one could imbue an arrangement with elements of conventional narrative. (Here’s where, as in that “little screen” production of the ’fifties or ’sixties—what’s it call’d, You Be Somebody?—the emcee asks for the real Ron Silliman poem to please stand up and, amidst highly-coach’d feints and pauses and g-g-good-humor’d tomfoolery, one of the contestants finally (almost bashfully) does so. “Number two? oh, I was absolutely positive it was number one.” Who turns out to be a laundress in Teaneck.)

The validity of a work of art is situated in contemporary reality to the extent that the artist must honestly anticipate the realization of this vision in “action” (as an actively operating principle of communal works and faith), and I don’t mean by this that his procedure requires any bona fide evidences directly and personally signaled, nor even any physical signs or portents. The darkness is part of his business. It has always been taken for granted, however, that his intuitions were salutary and that his vision either sowed or epitomized “experience” (in the Blakian sense). Even the rapturous and explosive destructivism of Rimbaud presupposes this, even his lonely hauteur demands it for any estimate or appreciation. (The romantic attitude must at least have the background of an age of faith, whether approved or disproved no matter.)

Typing that, I begin to suspect that there’s some Christian meaning to “action” (good works) that is slapping at Crane’s fanny (and “unavailable” to me). I am trying to correlate “action” here to Jackson Pollock’s “procedural” term, working in the painting. Pollock:

When I am in my painting, I’m not aware of what I’m doing. It is only after a sort of “get acquainted” period that I see what I have been about. I have no fear of making changes, destroying the image, etc., because the painting has a life of its own. I try to let it come through. It is only when I lose contact with the painting that the result is a mess. Otherwise there is pure harmony, an easy give and take, and the painting comes.

Which, in counterpoint, to the Crane, suddenly betrays a similar “religious” thrust, a submerging of self in the demands of “works and faith.” Less a procedural commitment than a tenacious human drive to subsume oneself in something larger—“experience” (of whatever sort). Is that “available” through unfinal “ceaselessly rearrangeable” sentences? It may well be. (My sense is that Crane’s “The darkness is part of [the artist’s] business” and Pollock’s “I’m not aware of what I’m doing” are absolutely key to the activity—that “submergence” again.) Subjectivism: the human being subject of the work through being subject’d to by the work. (How much is the reading of Faulkner’s unbelievably powerful manhandling prose—about the “tall convict” swept along for days in a skiff in a flood—in The Wild Palms pushing me into the morning’s “do me, Lord” version of art, I do not know . . .) Think I’ll jump ship with a critic—Harold Rosenberg’s assessment of “Action Painting” (with bonus words for “our” groupuscules):

In that it dared to be subjective, to affirm the artist as an active self, Action Painting was the last “moment” in art on the plane of dramatic and intellectual seriousness. The painters in this current have kept to the tradition of the human being as the ultimate subject of painting. All art movements are movements toward mediocrity for those who are content to be carried by them. The premises of Action Painting, however, are still valid for individual beginnings.

Out of the essay “Action Painting: Crisis and Distortion” (The Anxious Object).