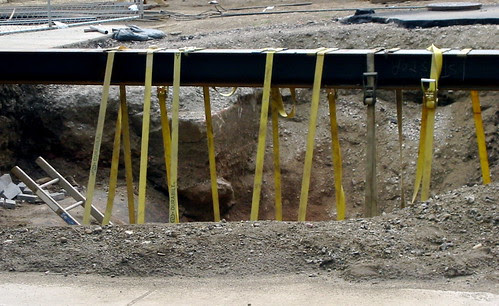 Books pile up. Some I forget about, second-hand things scoop’d up out of book mischief, the way a book’ll beg like a starlet for one chance to expose itself (with a shimmy, a lark, a pout), and end up an untoward necessity, never entirely ditch’d. (The way a sentence’ll beg like a stray dog for one chance . . . oh stop.) And going about shifting piles here and there, one uncovers things: landscapes of a soul. (The idea coming out of Stendahl, who got replaced by Rabelais, who got replaced by Kundera, who . . .) In the Henry Brulard, he writes of “Landscapes . . . like a violin bow playing on my soul” and longs to specify a landscape for each acquaintance: “the line of rocks as one approaches Arbois . . . and coming from Dôle along the main road, was for me an obvious and perceptible image of Métilde’s soul.” One uncovers things: a fortuitous inventory of a particularly rabid few months, the lowland scrapings of a mined-out region, unconditional hazards, bullies with spines, dog-ear’d replicas of gone days, double-shelved wonders. Upshot of living in semi-detached chaos: even if I never locate, say, my copy of The Sinking of Odradek Stadium, one day a Penguin Herodotus’ll spurt forth out of the turbulence, or one day a 1965 California paperback of Hart Crane’s letters—edited by Brom Weber and since, I think, “superseded”—full of curious markings made, according to one note, by one Susan Jenkins Brown, to whom Crane sent several letters. Identifying initials and ellipses provided in a minuscule blue-ink’d hand. In pencil—on the first (blank) page: “For Bernard Magda, Christmas, 1967.” Or a knowing note addressed to one (or two) “Finches,” in a cramp’d hand:

These initials and blanks of Weber’s blow up this incident disproportionately. There was nothing sinister about it at all. Hart was trying to be coy and funny. Sue.

The “incident” is hardly count’d one: most of the blanks refer to one “incomparable Jack,” a “noble tar” who “comes clear up from Norfolk” (to Patterson) to see Crane. Elsewhere, pointing to Crane’s report of “a wild Irish red-headed sailor of the Coast Guard” who “took me to some kind of opium den way off, God knows where. Whereat I got angry and left him, or rather Mike Drayton did,” Brown writes in the margin:

Hart said he used the name of the 16th cent. poet Michael Drayton when he went prowling, drunk, to sailors’ hangouts.

A lovely detail. The Drayton of the Poly-Olbion, that topography of England, what seems to upstart aerially:

Direct my course so right, as with thy hand to showe
Which way thy Forrests range, which way thy Riuers flowe;
Wise Genius, by thy helpe that so I may discry
How thy faire Mountaines stand, and how thy Vallyes lie;
From those cleere pearlie Cleeues which see the Mornings pride,
And check the surlie Impes of Neptune when they chide,
Vnto the big-swolne waues in the Iberian streame,
Where Titan still vnyokes his fiery-hoofed Teame,
And oft his flaming locks in lushious Nectar steepes,
When from Olympus top he plungeth in the Deepes:
That from th’Armorick sands, on surging Neptunes leas
Through the Hibernick Gulfe (those rough Vergiuian seas)
My verse with wings of skill may flie a loftie gate . . .

A sailorly piece. How did I find myself here?

Thinking of something like a lost capacity for the Imaginary. Thinking the Imaginary is always and ever now mere pendent to the small lost dogs of Hearsay. The ab ovo Imaginary bust’d, in pieces. Milan Kundera writes about one Kazimierz Brandys, in whose Pomysl (Idea) one finds the story of a Polish émigré teaching the history of Polish literature at an American university: “knowing that no one has any idea of it, he invents for his own amusement a fictive literature, made up of writers and works that have never existed.” (Upshot is, the literature “differs in no essential way,” invention merely apes the real.) Or there’s the story Herodotus tosses forth: of one Psammetichus, a king of Egypt who insist’d that of all the races in the world, the Egyptians were the most ancient. Prodded to a proof, he puts two newly born babies out amongst the sheep, instructs the shepherds to bring them up, offer them goat milk, keep them isolated in a “lonely cottage,” &c.—and to utter no word in the tykes’ presence. “All these arrangements were made by Psammetichus because he wished to find out what word the children would fist utter, once they had grown out of their meaningless baby-talk.” Two years later: the shepherd enters the cottage and “both children, running up to him with hands outstretched, pronounced the word ‘becos.’” Phrygian for “bread,” Psammetichus wrong, other versions of the story have the kids raised by women with tongues cut out, it’s all and ever Hearsay, nothing is ever invent’d, there is no Imaginary. Books pile up.

And authorial intent? How did I find myself here? Authorial intent is like the Hide-behind in “the wry mythology of the Wisconsin and Minnesota lumber camps” (Borges):

The Hide-behind is always hiding behind something. Whichever way a man turns, it’s always behind him, which is why nobody has ever satisfactorily described one, though it has killed and eaten many a lumberjack.

And many a writer. The only advice I can think of: if you see the Hide-behind of authorial intent coming, find something bigger to hide behind.